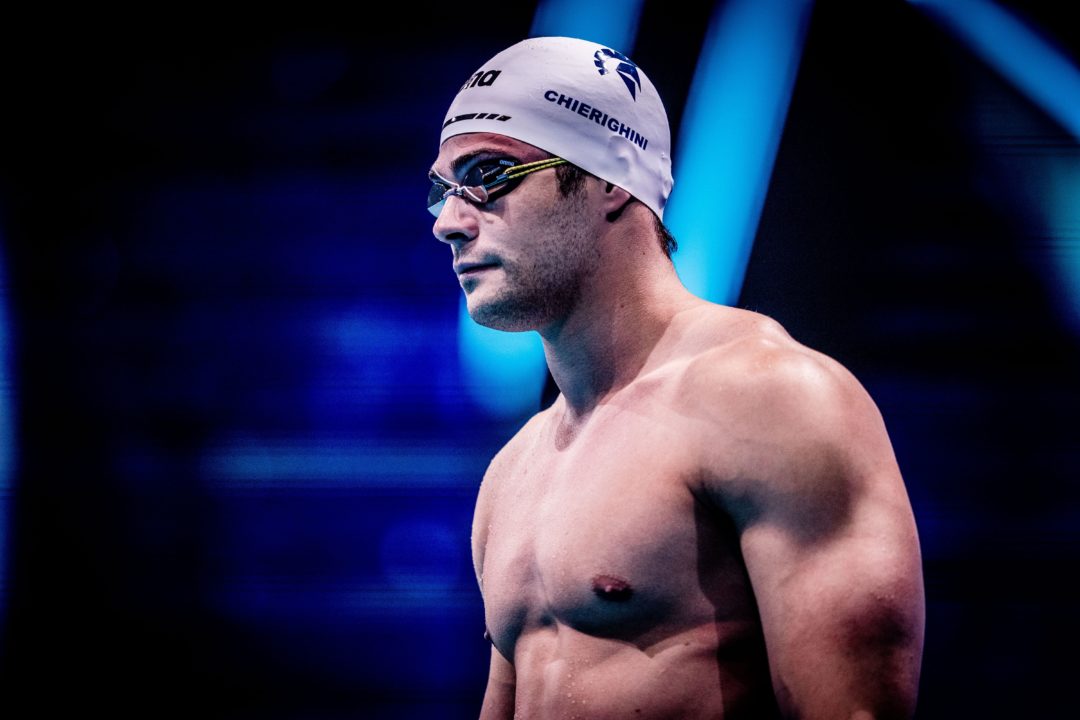 Marcelo Chierighini had the fastest split in the field, 45.67, as the Aqua Centurions won their third straight men's 4x100 free relay. Current photo via Mine Kasapoglu

Three different clubs walked away with relay wins on the opening day of the sixth ISL match, as the Aqua Centurion men won their third straight men’s 4×100 free, the Toronto Titans picked up their first-ever relay title, and Energy Standard won the women’s free and men’s medley.

Below, we’ll take a deeper look into the splits from each race.

Siobhan Haughey blew the doors open for Energy Standard right off the bat, giving the club almost a two-second lead after setting an Asian Record for the 100 free in 51.14.

Claire Fisch was the second-fastest lead-off swimmer for Toronto’s ‘B’ team, setting them up well as the club ultimately placed second and fourth.

Michelle Coleman had the fastest flying split for Toronto in 52.16, though she had been 51.61 in the last match. Louise Hansson and Julie Meynen kept all of the club’s legs sub-53 as they edged the Breakers for second, who had a quick anchor from Daria S Ustinova (52.44).

In 52.22, Pernille Blume recorded her fastest split of the season for Energy Standard after going 52.59 in Match 1.

Fisch and Anika Apostalon (52.60) were the keys in getting the Titan ‘B’ team past the Aqua Centurion ‘A’ relay.

It was a personal best for Aqua Centurion Pedro Spajari on the lead-off, clocking 46.88 to hand his club a lead they would not relinquish.

It didn’t look like Energy Standard was really trying to split their relays, but that’s sort of the way things ended up as they took third and fourth. From the ‘B’ team, Kliment Kolesnikov led off in 46.97, well under his individual showing from Match 1 (47.57). That was over seven-tenths quicker than teammate Sergey Shevtsov on the ‘A’ roster.

The Centurion men showed why they haven’t lost this relay all season, putting up the three fastest splits in the field with Marcelo Chierighini leading the way in 45.67.

Brent Hayden showed some nice improvement from Match 3, going over three-tenths faster in 46.49 for the Titans as they claimed second.

Florent Manaudou wasn’t great for Energy Standard here in 47.01 — he would redeem himself with a blazing 45.77 on the medley relay later.

Overall, five of the 12 men who broke 47 (lead-off or with a takeover) swim for the Aqua Centurions.

The women’s medley was the most exciting relay of the day, with the Toronto Titans and Energy Standard battling all the way to the wall.

Kylie Masse produced her fastest-ever ISL swim in 56.22 leading off, opening up a lead of nearly eight-tenths on Emily Seebohm (57.00).

The women’s breaststroking field, as has been the case in most matches, was elite. Five athletes were under 1:05, led by teenager Benedetta Pilato in 1:04.27 for Energy Standard. That made up some ground, but 200 breast winner Kelsey Wog (1:04.79) maintained the Toronto lead.

The Aqua Centurions finished seventh and eighth in this race, but had two of the best breast splits from Arianna Castiglioni and Martina Carraro.

Hansson was a standout on fly for Toronto, splitting 55.34 — more than a second faster than she did in Match 3 (56.41) — to extend the lead against individual 100 fly winner Anastasiya Shkurdai.

In her first meet back since contracting COVID-19, Femke Heemskerk had a blistering anchor for Energy Standard in 51.79, but Coleman managed to hold her off with a strong 52.15.

Toronto ended up being over two seconds faster than Match 3 with the big improvements from Masse and Hansson.

Kasia Wasick, who sat out of the 400 free relay for the second straight meet to rest for the 50 free, joined Heemskerk sub-52 for the New York Breakers in 51.81.

Evgeny Rylov got Energy Standard out to the early lead in the men’s medley, almost a full second faster than he was on this relay in Match 1, and the club went on to win comfortably. Rylov’s 50.14 ended up being the major difference between Energy Standard and the Aqua Centurions, who were close on the three other strokes but lost ground with Matteo Rivolta‘s 51.22 100 back.

Kolesnikov had another good swim for Energy’s ‘B’ squad in 50.59.

Ilya Shymanovich and Nicolo Martinenghi had a pair of sparkling sub-56 breaststroke splits, as five men overall got under 57. Shymanovich was 56.06 in Match 1, and followed with a 55.59 here.

The fact that Marco Koch scared the 200 breast world record earlier in the session and then only had the fifth-fastest relay split really speaks to the depth of the stroke in this match (similar sentiments can be said about Kelsey Wog, who is less than two seconds off the textile WR in the women’s 200 breast but was still only fifth-fastest on the relay).

Szebasztian Szabo out-split Chad Le Clos on fly, joining Tom Shields in the sub-49 club in 48.97, and then Manaudou (45.77) and Alessandro Miressi (46.00) blazed down the pool on the freestyle.

Despite no great options on butterfly, the Titans got in for third with solid performances on back, breast and free.

I’m left amazed at Grevers versatility. I didn’t know he could fly. It is a riddle to me why they haven’t used him in the 100m medley so far.

He had good showings in that event in us masters swimming, last season he swam the 50 breast for lac once and he wasn’t too bad, today he showed he’s a decent flyer and I don’t think he needs to prove anything in back or freestyle.

-Kolesnikov, who struggled in the first match, shows some hope with the 2nd-fastest backstroke split of the field. Energy’s backstroke depth leaves Grevers with the fly leg.
-Many swimmers are faster on the free leg of the medley relay than they are on the free relay, that has been seen over several meets. No 51 splits for the women on the free relay, but multiple on the medley. Manaudou also got significantly faster (47.01 to 45.77) while the Centurion men were an exception.