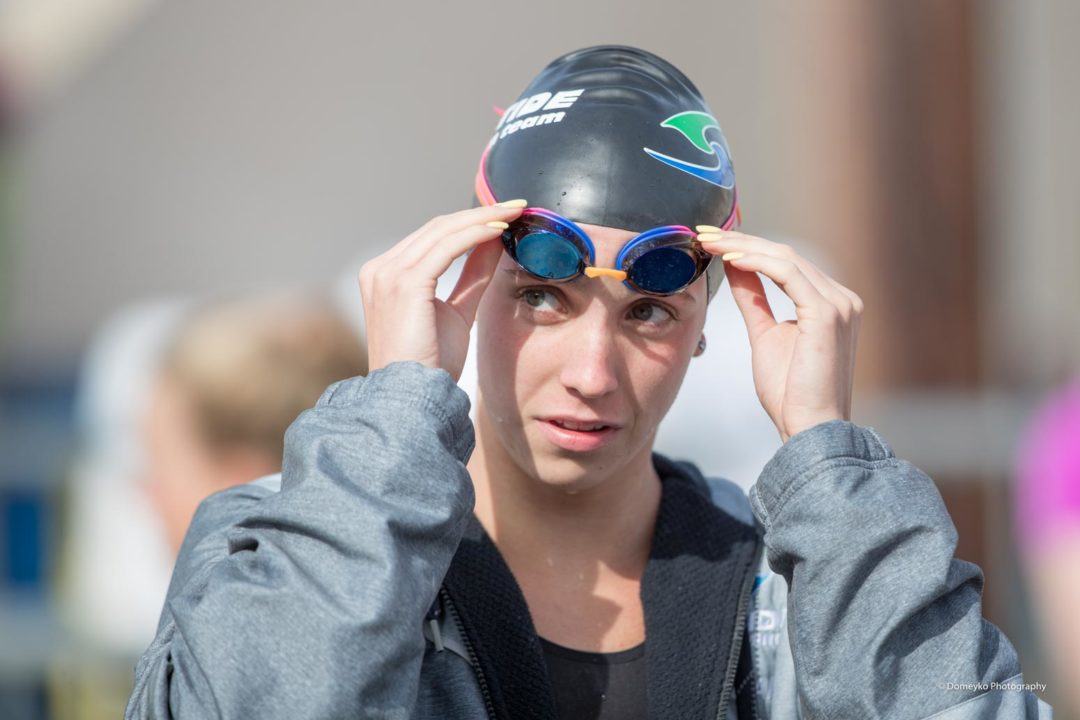 In her first sub-2:00 performance in the 200 meter freestyle, Regan Smith hit the wall first in 1:58.44, narrowly ahead of Gabby DeLoof. Current photo via “Rafael/Domeyko Photography”

In her first sub-2:00 performance in the 200 meter freestyle, Regan Smith held her position as the top seed and hit the wall first, just 22/100ths ahead of Club Wolverine’s Gabby DeLoof. Smith’s new best time of 1:58.44 is nearly a full two seconds faster than her seed time entering the meet, which stood at 2:00.36 from January. DeLoof’s time of 1:58.66 comes as a major season best, obliterating the 1:59.77 she put up at the Knoxville stop of the Pro Swim Series in January. Kaersten Meitz of Boilermaker Aquatics finished 3rd in 2:00.60, adding a little over a tenth to her prelims time, but still coming within a second of her lifetime best.

Apple won the men’s 50 free in 22.59 ahead of Michigan’s Gus Borges and Louisville’s Mihalis Deliyiannis, who touched in 22.84 and 22.97, respectively. For Apple, tonight’s swim comes as his second season-best in the 50 today, improving upon his previous mark of 22.72 from May.

The women’s 50 free, on the other hand, did not have a clear winner and instead ended in a tie between Louisville’s Avery Braunecker and Michigan’s Daria Pyshnenko in 26.10. 15-year-old Mckenna Stone touched 3rd in 26.12, improving upon her lifetime best by .09, and just edging ahead of 17-year-old Chloe Grimme who touched 4th in 26.13, just .05 off her lifetime best.

Michigan’s Charlie Swanson recorded a huge in-season best in the 400 IM, winning in 4:18.28. The time tonight comes as the fastest non-championship time of Swanson’s career, besting his 2018 4:19.39 from the Columbus leg of the Pro Swim Series in July of 2018. Runner-up Mikey Calvillo came within 1.3 seconds of his lifetime best from 2017, finishing tonight in 4:23.35. Mariah Denigan won the women’s 400 IM in 4:45.31, just beating out Louisville’s Maria Eduarda Sumida who touched in 4:45.49. Though Sumida was out nearly two seconds faster at 200 meters thanks to her opening speed on the butterfly, Denigan began reeling her in on backstroke, where they split nearly even with 1:12.32 and 1:12.54, respectively. Denigan then made her move on breaststroke, making up half-a-second on Sumida, and on freestyle accelerated home with an impressive 1:02.80 over the final 100 freestyle, running down Sumida, who closed in 1:04.33.

Michigan’s Mariella Venter took the women’s 200 backstroke in 2:14.12, besting top-seed Sophia Tuinman, who nonetheless improved upon her morning swim and finished only a second off her lifetime best in the event with a 2:15.07. Louisville’s Grigory Tarasevich won the men’s 200 back in 1:58.67, and Spain’s Manuel Martos Bacarizo touched 2nd in 1:59.37, exactly equaling his time from the 2018 Youth Olympic Games.

Louisville’s Mitchell Whyte swam an impressive 22.83 in the ‘A’ final of the 50 freestyle, which would have been good for 2nd overall, had it not been completely underwater. Though Whyte was disqualified from the race, his time of 22.83 for a 50 LCM underwater dolphin kick is nonetheless impressive. You can watch Whyte’s swim in the video below. He is in lane 1 on the bottom of the screen. After diving in, he flips onto his back and kicks on his back for the entirety of the 50 meters.

Coach at the meet.

The underwater kick 50 is extra special because he also did it in prelims, but DIDN’T get called for it. Miles Smachlo then did it in the B final that evening as well

Smith is doing so good , even in the 200 free …….amazing improvements there .

Does anyone know if she’s swimming the 2fly here? She’s been swimming well so would be interesting to see she “responds” to Flickinger and Drabot’s 2:06s.

Hey Reid, good article, great news. Ummm – there are some possible errata though – Reagan Smith’s 200 time is nearly a full TWO seconds faster, plus Grigory swam 200 back not 100. TYVM for correcting.