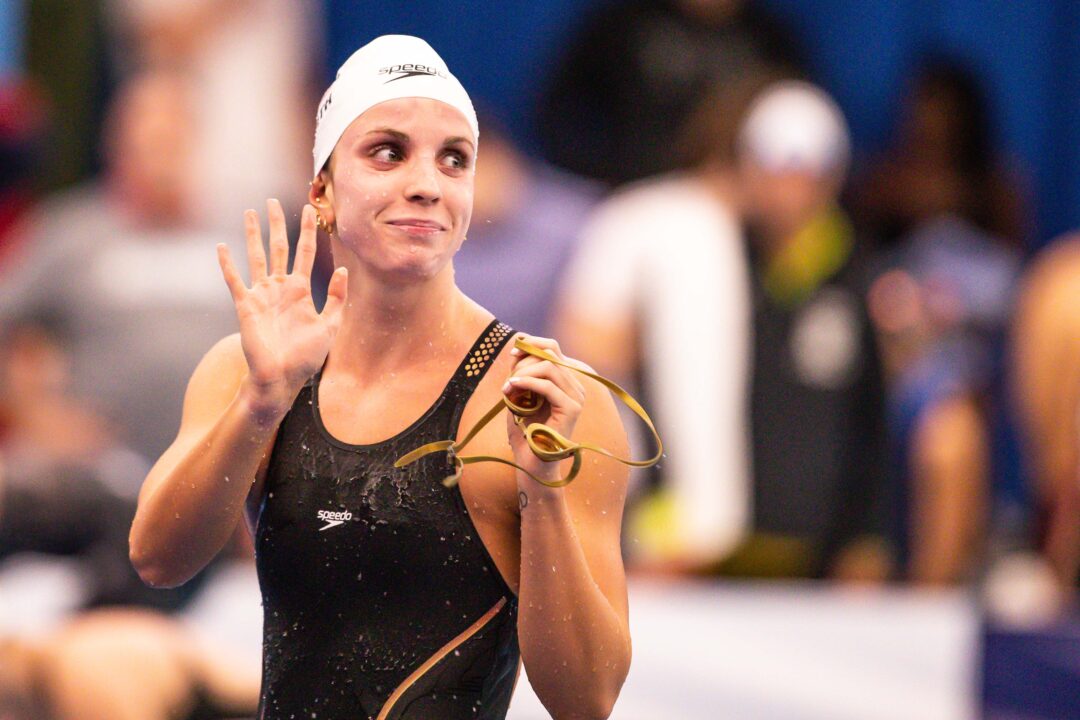 Smith was both faster than the 58.22 she went to win gold at the 2022 World Championships and the 58.01 she swam to win bronze at the Olympics. Archive photo via Jack Spitser/Spitser Photography

After dropping three seconds in her 200 IM on Thursday, Smith set a U.S. Open Meet record in the 100 back tonight, swimming a 57.95. She breaks Phoebe Bacon’s previous record time of 58.63, which was set in 2019. Smith was faster than the 58.22 she swam to win gold at the 2022 World Championships, as well as the 58.01 she swam to take bronze at the 2020(1) Olympic Games. Her swim tonight also marked her ninth swim under 58 seconds, a threshold that only two other women, Kaylee McKeown and Kylie Masse, have been under.

And while Smith has been sub-58 on several occasions that were not World or Olympic finals, tonight marks her first time getting under the barrier in an in-season meet. Her best time stands at a 57.57 from 2019, a former world record that has since then been broken by McKeown. Smith has neared that best time several times this year, including when she went 57.76 at the 2022 U.S. World Championship trials, and when she clocked her 2022 season-best of 57.65 in the World Championship semifinals.

Smith paced her race tonight very differently from her personal best, opening half a second slower but then closing over two-tenths faster. In fact, her closing split of 29.57 was identical to the one she posted in the world championships semifinals this summer.

The U.S. Open marks Smith’s first meet since making the decision to leave Stanford after her first season of NCAA swimming and turn pro, shifting her training base to Arizona State to be coached by Bob Bowman. She has emphasized several times throughout the meet how happy she is with her move, such as in her post-100 back race interview.

“My results are showing me that I made a really great decision going to train under Bob,” Smith said. “I’m so happy, which I think is the most important thing. Just, you know, having a good time, enjoying training, enjoying the weather out there, enjoying my new apartment, I’m just loving life so much.”

Good for you Regan.
You can hear the happiness in her voice. She’s in a great place and I hope it continues for her.

Ok so tapering gives faster starting speed, and her backend speed right now is crazy, 29.5 coming home. If she can go out 27 mid and come back 29.5 next summer, she could get her WR back.

We get it. She moved to ASU. Why is there the same 3 sentences about this for each article about her and/or the meet? It feels like a hype train about bowman and his pro group every time….

I am so happy that she’s happy now. Arizona looks good on her!

The mass exodus from Stanford University:

Exodus of 2 who graduated and 1 dropout.

I would submit calling Regan a drop out is unfair. College
is a place to which Regan or any student who decides to take a pause can return. College swimming is not the answer for everyone.

What do you mean “happy now”????
Was she unhappy before????
A little presumptuous aren’t we???

A lot of people after moving out from Stanford seems to be doing really well .

3 swimmers that we know right now and still curious to see if Manuel is improving just like Regan.

At least she doesn’t have OTS now.

Sounds like someone didn’t get in to Stanford. It’s Ok, don’t feel bad. Only about 3% of people who apply are accepted. You’re in good company!