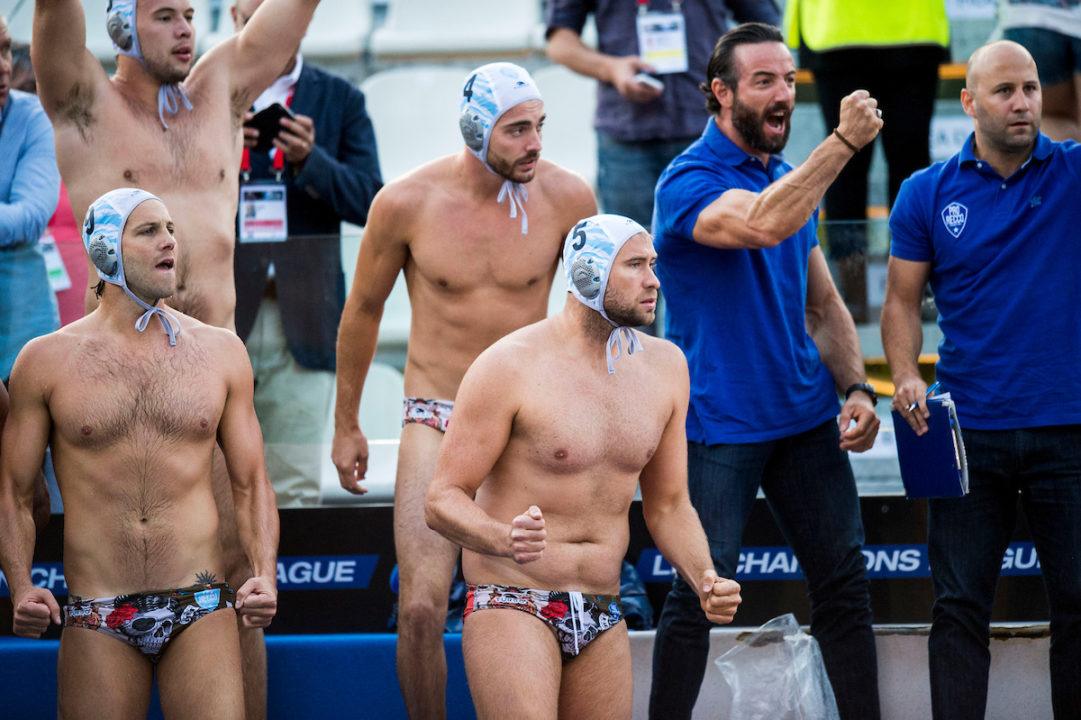 The respective group-winners in the prelims reached the final by winning fierce battles over two quality rivals. Olympiacos (GRE) prevailed against Barceloneta (ESP) in a low-scoring match while Recco (ITA) overcame Jug (CRO) in a gruelling fight. The Greeks made the title bout after 2016 while Recco returns to the final stage after three years.

Olympiacos scored only six goals per game so far here in Genoa but that was enough to reach the final. After struggling against Spandau in the quarters (6-5) they managed to take the upper hand against Barceloneta too. It was a highly tactical game where well-organized defenses worked really well.

While the Greeks seemed to have more control, Barceloneta still created some chances and made the most of them whenever they could – however, misses in the most crucial moments prevented them from saving the game at least to a shootout. The Croatian guards of Olympiacos did a great job, Josip Pavic in the goal as well as Andro Buslje and Paolo Obradovic, both netted brilliant action goals in the second half which made the difference.

The Greeks are to clash with Pro Recco for the title as the hosts could finally get rid of their demons and beat Jug after two lost semi-final matches in the previous two editions. The Croats, fielding a team with less depth as in the previous years, still imposed some threats to the hosts who were not able to build a safe distance at any time in the match.

Jug not only came back from time to time but, after being 4-2 down, managed to take the lead early in the third period at 4-5. However, Recco produced a better spell towards the end of this quarter and went 6-5 up before the last break. The hosts expanded the gap to two three times, Jug had the answers on the first two occasions (it was 8-7 with 3:42 to go) but Filip Filipovic’s third goal for 9-7 remained without an immediate response. When it came, with 0:27 on the clock, it was too late.

For the lower places the two Hungarian powerhouses restored some pride and beat their respective opponents with convincing performances. Eger downed Spandau (GER) and Szolnok overcame Brescia (ITA) to set up an in-house clash on the closing day for the 5th place – though a year ago their match in the semi-final was a different story.

The teams sat on the rollercoaster in the first half, both sides had some fine and less promising spells, perhaps Olympiacos missed the bigger chance to do some damage right in the second period. After a series of missed man-ups a quick exchange of goals settled the first period for 1-1. The Greeks took the upper hand in the second, Konstantinos Genidounias scored in a dying men-up, then the defense killed a Spanish man-up and Alexandros Gounas netted another from a counter for 3-1. Olympiacos was rolling in this phase, had a 6 on 5 to build a three-goal cushion but, after a time-out, Genidounias could hit only the post. And soon they let another extra go and the Spaniards come back to the match. Alvaro Granados netted an action goal then Felipe Perrone buried a fine shot after the first attempt was saved by the goalie in a man-up for 3-3.

The trend went on in the third, the action-packed middle part first saw a disallowed penalty goal from Genidounias (he failed to make an uninterrupted shooting move) – a goal from the next attack would have given a psychological advantage to Barceloneta but they couldn’t make their 6 on 5. Dani Lopez made a save in a Greek extra, then a technical mistake cost another man-up for Barceloneta. In such a battle an action goal might mean a lot and Andro Buslje delivered one for Olympiacos after a great counter, however, Barceloneta managed to reply immediately, this time they could put away their man-up, thanks to Josip Vrlic who scored from close range for 4-4.

The Spaniards blew another chance in the fourth while Ioannis Fountoulis managed to find the way to the back of the net between the hands of Lopez and the post from a man-up – the Greek scoring machine was brave enough after four missed shots to take a fifth one which seemed to be a crucial goal. The Spaniards tried to play the same scheme at the other end as they had done before their fourth goal but this time Pavic stopped the shot. Olympiacos had another man-up to go 6-4 but Lopez made a fantastic save. With 58sec to go Barceloneta got a very last chance but Alvaro Granados’s shot was brilliantly blocked and Paolo Obradovic beat the young Spaniard at the other end while he finished off the match with a great back-handed goal.

Though Jug beat Recco twice in the semis in the previous two editions, those teams were stronger than the current one – all credits go to the Croats that they were able to reach this stage once more. It was inevitable that they only have a chance to catch the super-favorite if they could stay close as long as possible. Recco, surviving the scares against Brescia, started the game in commanding style, with a great action goal from the first possession and a killed man-down. Though Vincenzo Renzuto netted a fine goal from a counter to make it 1-1, Recco started to dominate soon, the usual blast from Filip Filipovic and a nice one-timer from Michael Bodegas from a man-up gave the hosts a 3-1 lead. Jug wasn’t able to put away its man-ups for a while and the post twice saved the Italians too. Still, Viktor Rasovic netted one after collecting a rebound, with just 1.6sec on the clock at the end of the first which showed that the Croats would not give this match free for Recco.

Tensions began to run higher in the second, Francesco di Fulvio netted a 5m shot for 4-2 early in the period but Recco couldn’t add any more in the remaining 6:21 minutes in this quarter. Jug’s attack wasn’t too effective either, they missed a 6 on 4, but their defense also worked well while killing back-to-back extras. Though Tempesti delivered a couple of fine saves, he couldn’t take a hand on Hrvoje Benic’s fine shot in a 6 on 5. Marko Bijac also did a great job in the other goal so it stood 4-3 at half-time.

Soon it was equal, Xavi Garcie earned some advantage on the right wing and sent the ball home from the counter. Soon they were ahead at 4-5 as Loren Fatovic put away a 6 on 5 and the scenario started to remind many of the previous years… A double red card for Niccolo Gitto and Luka Loncar demonstrated the heat of the battle (it was a bigger loss for the Croats as the centre-forward was expelled for the remaining of the game) – where Recco soon gained ground again. Gonzalo Echenique sent the ball home from a nicely set-up extra, then the Recco defence killed a man-down and di Fulvio finished the ensuing counter to make it 6-5 (scored this double in 57 seconds). The Croats were back to struggling, wasted another 6 on 5, Tempesti could make a save as the shooting opportunity wasn’t properly set up – so Recco held its single-goal lead before the final eight minutes.

A crucial action goal opened the last period, Guillermo Molina found enough space to score from a counter for 7-5 but after two missed man-ups in the previous period, Jug found the key and Maro Jokovic netted a fine shot for 7-6. Jokovic had another chance soon, had two shots in the next 6 on 5, the first one was saved, the second was blocked and Recco hit back with a brilliant combination from Echenique and Filipovic. Fatovic learnt the lesson as he opted for a direct shot from 5m right after earning an extra and the kept Jug close. Bijac had a great catch in Recco’s next 6 on 5 but he couldn’t save the day with 2:27 to go when Filipovic buried a penalty for 9-7. That was the point when the Croats were broken finally – though they killed a man-down but gave away two balls by long but less precise passes. Credits to Jug that they still did what they could, with 27 seconds to go they pulled one back but couldn’t take the ball back and Recco could finally celebrate of making the final for the first time since 2015.

Though Eger opened the scoring, soon Spandau had a fine spell and rushed to a 3-1 lead late in the first period. Few would have guessed that the next German goal would arrive in the fourth period. It happened so, Eger shut out its rival for 20:52 minutes, though the Hungarians weren’t too fresh either as they couldn’t deliver a decisive blow though scoring four goals gave them a 5-3 lead after three periods. Still, Spandau pulled one back early in the fourth but a fine man-up reset the two-goal gap in the next possession and Strahinja Rasovic’s 5m shot expanded it to three. The Germans fought on, as they usually do, at 5-7 they had an extra but missed it and that was their last chance to stay in the match, it turned out soon. Eger netted two in 38 seconds and that decided the outcome. Eger’s Olympic champion Serbian goalie Branislav Mitrovic enjoyed a great day, had 10 stops on 16 shots for 62.4% – contributing a lot to Eger’s win.

The losers of perhaps the two most exhausting matches had to play on the next day in a consolation match – finding the motivation, let alone enough reserves was a tremendous challenge for both. After a balanced opening period which saw one goal apiece Szolnok took control by netting two in 1:47 minutes for a 1-3 lead. From that on the title-holder dominated but not overwhelmingly. Deep into the third they went 2-5 up while bad misses showed how hard was to play just a day after such matches as Szolnok’s clash with Jug and Brescia’s big battle against Recco, lost by penalties. After going three goals up, Szolnok seemed to have slowed down a bit too much while Brescia managed to score two fine action goals, especially Valerio Rizzo’s curled lob was outstanding and the Italians trailed only by one before the final period.

Szolnok’s young leftie Gergo Zalanki doubled their lead once more, Rizzo put away a penalty for 5-6 but Bence Batori’s fine shot from a 6 on 5 gave back the two-goal lead for the Magyars with 4:02 to go. Szolnok could have closed the match soon but missed a man-up for +3 and Nicholas Presciutti netted a brilliant goal from the distance for 6-7. Brescia had possessions to go even but couldn’t score from action this time while Aaron Younger’s 5m shot made its way to the net with 34 seconds from time. Though Brescia pulled one back once more 17 seconds later but the Hungarians kept the ball for the remaining moments.