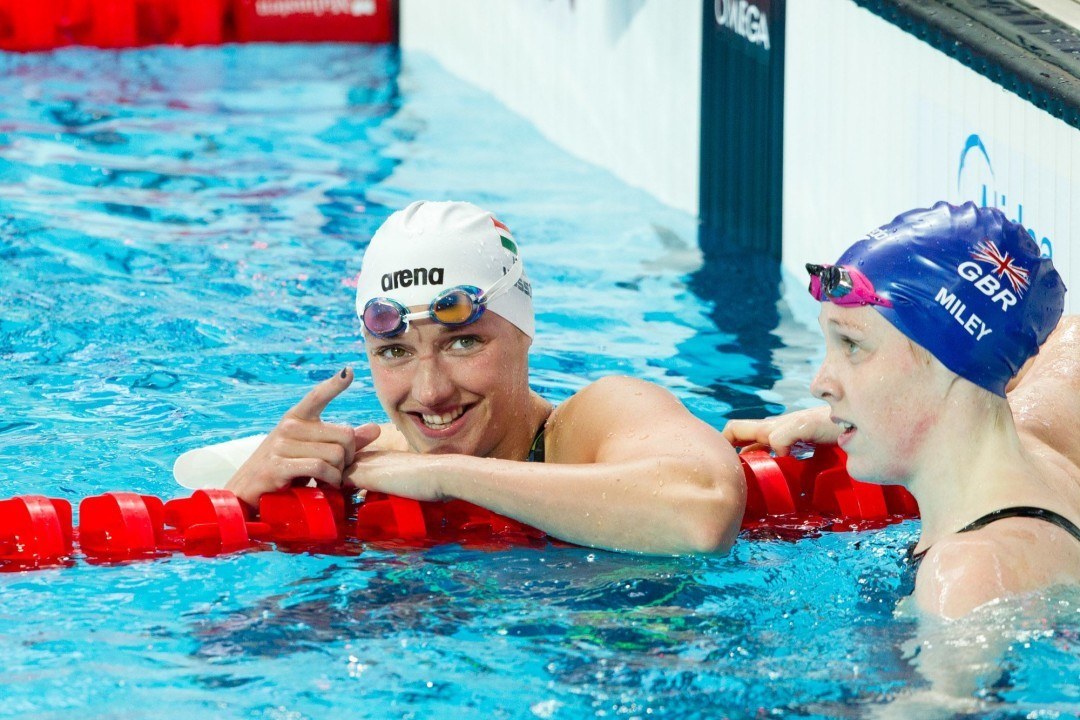 Katinka Hosszu will take on one of the toughest world records on the books in Rio: the women's 400 IM. Archive photo via Tim Binning/TheSwimPictures.com

This will be the first of two posts that will be ranking each world record (Olympic events only), by difficulty as we head into the summer. The records ranked highly are the ones that are least likely to be broken, and vice versa.

Some of the records, such as the women’s 800 free, are ranked low despite them being absolutely incredible. This is because someone (Ledecky) will likely break it this summer. It does not necessarily mean anyone else on the planet could, or it by any means is ‘easy’.

The women’s 200 fly is by far the most unattainable world record on the bocks, with the current mark of 2:01.81 being the fastest in history by 1.60 seconds. What’s truly mind-boggling is the fact that a sub-2:05 swim has only happened three times since the suits were banned at the end of 2009. Now that Katinka Hosszu has focused less on this event and more on the 200 back, it could stand for another generation. The closest swimmer in 2015 was three-and-a-half seconds away.

The 200 free isn’t quite at the level of Liu’s 200 fly record, but it is out there. Pellegrini slipped under the 1:53 barrier in ’09, while only one other woman, Allison Schmitt, has ever broken 1:54. The record appears safe for now, but with budding superstars Katie Ledecky and Sarah Sjostrom constantly getting better anything is possible.

Cate Campbell has come fairly close to this record on numerous occasions- she owns the 3rd through 7th fastest performances in history- but still has yet to get under 52.3 and the record is still a flawless swim away. Her 52.38 in May is a good sign heading to August but any record that still stands from ’09 is a tough one.

When broken the women’s 400 IM world record looked like it would stand for an incredibly long time, based off Ye Shiwen’s absurd freestyle split that easily carried her past American Elizbaeth Beisel for 2012 Olympic gold and the final leg also happened to be faster than the men’s winner, Ryan Lochte. But with Katinka Hosszu’s recent dominance it now seems plausible this record goes down in Rio. With the 400 IM on the first day (rather than the last like at Worlds), and with Hosszu breaking 4:30 for the first time in her career in-season in March, it might be time for it to go. It still remains one of the toughest records on the books as 4:30 has only been broken by four different women, and they’ve each only done it once.

The women’s 200 back record may not look too out there due to the fact record holder  Missy Franklin hopes to be on peak form in Rio, but it’s an incredibly tough one that would be somewhat shocking to see go down. A sub-2:05 swim has only happened four times ever, twice from Franklin, and twice in 2009. The fact is Franklin hasn’t been on her best form since the 2013 World Championships, and though there are hopes she’ll get back there this summer, the plausibility of a 2:04.0 or better seems unlikely. Emily Seebohm’s 2:05.81 to win in Kazan last year is the fastest swim since Franklin in 2013.

Franklin and Seebohm nearly took this one down in 2012, and Seebohm came close multiple times last year, indicating it could very well go this year. The fact remains it has remained unbroken for seven years, making it one of the more difficult ones.

This one is bound to go down at some point. Current stars Cate Campbell and Sarah Sjostrom have both broken 24 seconds (Campbell has done so four times), and has come as close as 0.11 off the record. With the form she is showing in 2016, it’s conceivable it goes, but far from a sure thing.

Despite this one being broken a relatively short time ago in 2013, it is deceptively difficult. There have been no sub-1:05 swims since 2013, and record holder Ruta Meilutyte’s best since the beginning of 2015 is 1:05.4. Someone to keep an eye on in this event is American Lilly King who broke American and NCAA records this year in this event.

A record that would’ve found its way to one of the top spots on the list just just a year ago, it now sits eel down here at number nine after Katinka Hosszu did the unthinkable and got under Ariana Kukors’ record of 2:06.15. Before Kazan sub-2:08 swims were rare, and only that one time had anyone ever gone under 2:07. Until Hosszu did it, semis and finals, ultimately eclipsing the record by 0.03. Though it remains nearly impossible for anyone other than Hosszu, it is no longer the untouchable that it once was.

This record is quite rich, but Sarah Sjostrom has been so good over the last two years it’s almost a certainty that she’ll re-break this record in Rio. Sjostrom came within four one-hundredths of this record in late March, making it hard to believe she won’t crush that time come August.

Rikke Moller Pedersen and Yuliya Efimova taking out Rebecaa Soni’s world record in 2013 was a big surprise and it looked like the record may stand a while, but Viktoria Zeynep Gunes and Rie Kaneto, both relatively unknown breaststrokers, have been 2:19 in the last 12 months. It’ll be a surprise if one of those women, if not someone else, takes this record in Rio.

Yes, this world record is incredible. Yes, no woman other than Ledecky has come within six and a half seconds of it. But, the fact is, Ledecky swam this time at an in-season meet in JANUARY. Totally unexpected. It’s hard to think she won’t better that in Rio, or even Omaha. Both. Probably both.

This record is incredible, as only one other woman in history (Federica Pellegrini in 2009) has gone under four minutes. However, as proof of her 800 and 1500, Ledecky has made significant improvements since 2014, and that will translate to her 400. She just hasn’t put the perfect race together yet to do it. It’ll go down this summer.

The American team that set this world record in 2012 was incredibly stacked at each leg, with the individual 100 back and fly gold medalists along with the 200 breast and free champs on the other two legs. The Americans, 2015 World Champion Chinese, Australians and Swedes will all be in contention for the win here, but it doesn’t look like any of the teams have the four legs the Americans did back in 2012. The best chance for anyone to break it would be if Missy Franklin returned to top form and Lilly King emerged as a gold medal threat in the 100 breast.

The women’s 800 free is the longest standing of the three relay records, with China setting it in back in 2009. The closest anyone has gotten since was at the 2012 Olympics when the United States went 7:42.9 with Missy Franklin at her peak and Allison Schmitt who won the individual 200 at those Games by nearly two full seconds. With Franklin, Schmitt and Ledecky likely representing the U.S. in the final they’ll have a legitimate shot at this one. China’s win 2009 was the last time the Americans lost at a Olympics or World Championships.

The Australians have become a dominant force in this event with the emergence of Bronte Campbell and Emma McKeon recently, and Cate Campbell has been a staple on the relay for years. They shouldn’t have a problem winning and provided their fourth member, likely either Brittany Elmslie or Emily Seebohm, is in the 53-low range they should get the record.

Regarding the 50 free… Fran Halsall swam the (joint I think) fastest time in 2014. 2015 wasn’t a spectacular year for her but don’t count her out.

Recall that during the winter, Ranomi K from Netherlands tied her own world record SCM in season. She has also been a dominant force in LCM for some years, so a perfect race here might vault her to the top of all performances (i.e., WR).

I’d argue that SCM for 50 free isn’t a huge indicator of a LCM 50m purely because those underwaters potentially make up 60% of the swim. Having said that I love watching Kromowidjojo swim and think she’s an amazing sprinter and would love to see her (or, honestly, Sjostrom or Halsall) win. Having said that, the only reason I didn’t mention her is, firstly, I didn’t think it needed to be said. She had a great 2015 (at the Worlds 2nd in 50m and 4th place 100m, and capable of better) and is having a great 2016. She is definitely in the running for a (gold?) medal and everyone knows the threat she poses. Second, she has not (as far… Read more »

The 100 back is more likely to be broken than the 200 breast. That’s if Efimova is deservedly banned. IF the cheat is allowed to compete, well…

Yeah, I’m with you on that. With the front end speed she had developed, and the back half she is capable of, I’m pretty sure she can do 54.5 then 58.0 to get that record…

And sarah sjöström will re-break it …hmmmm