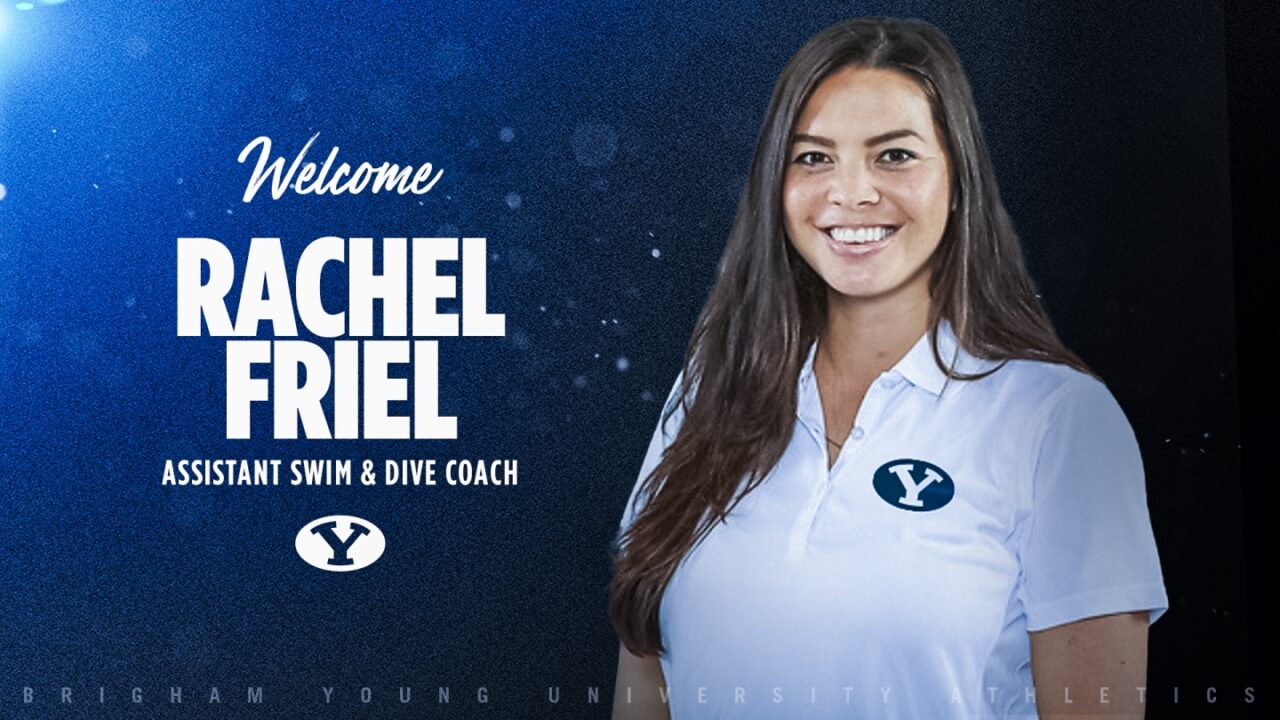 Friel swam at BYU from 2007-11, and was the two-time Mountain West Conference Swimmer of the Year and competed in the NCAA National Championships three times. Current photo via BYU Athletics

Friel swam at BYU from 2007-11. She was named the Mountain West Conference Swimmer of the Year twice and competed in the NCAA National Championships three times. She competed in the 200 butterfly and both the 200 and 400 individual medley. And holds multiple team records at BYU and pool records across the country.

In addition to a successful collegiate career, Friel represented Hong Kong in several international competitions, including the World University games in Serbia (2009) and again in Shenzhen China (2011). Friel also competed in the 2008 Olympic trials in Hong Kong and the US. She was on the Hong Kong national team from 2006-11.

Friel spent the past six seasons as an assistant coach at the University of North Texas.

“Rachel adds passion, talent and years of experience on the national and international scene,” said Shari Skabelund, BYU interim head coach. “Rachel has an incredible work ethic. She also knows how to have fun while chasing dreams. We are so excited to welcome her back and have her a part of our staff.“

Friel was born in Hong Kong and raised in California. She graduated from BYU with a degree in pyschology.

Once she completed her eligibility at BYU in 2011, Friel stayed in Provo as a graduate assistant for one year before accepting the swimming head coaching position at Maple Mountain High School in August 2012, where she coached for three seasons. After leaving Utah and moving to Las Vegas, Friel continued coaching club at Boulder City Henderson Aquatics, where she was the head age group coach and senior coach, helping athletes continue to get faster as they prepared for national level meets and olympic trials.

At North Texas, Friel helped the team rewrite more than 15 records and made school history with a third-place finish in Conference USA. Friel coached her athletes to various individual top-three podium finishes and Conference USA championships.

Friel was the head recruiting coordinator at North Texas and brought in some of the strongest swimmers in school history that helped break school records.

Friel is married to former BYU football tight end Kaneakua Friel, and they have two sons.

I still find it interesting that a program that finished first (men) and second (women) in their conference let their head coach go with no explanation.

That said, their new (interim) head coach has completely revamped the coaching staff (other than the dive coach) with what looks like some great young hires. I’m definitely not a Cougar fan (go Utes!) but as a college swim fan I sincerely hope this works out great for the program!

Yup. As ex-BYU swimmer would like to know that back story.

>Friel also competed in the 2008 Olympic trials in Hong Kong and the US
How does that work?

Can’t think of the name, but there was a highly-ranked junior swimmer who lives in the US who intended to race at both the US and Canadian Trials this year, but opted to just swim US Trials because of the COVID challenges.

Thank you Stan! Planning on making you proud 😊

So happy for you, Rachel! Thank you for everything you did at North Texas – all athletes benefited from your time there, especially Caroline. BYU is lucky to have you on deck. Go Cougs!