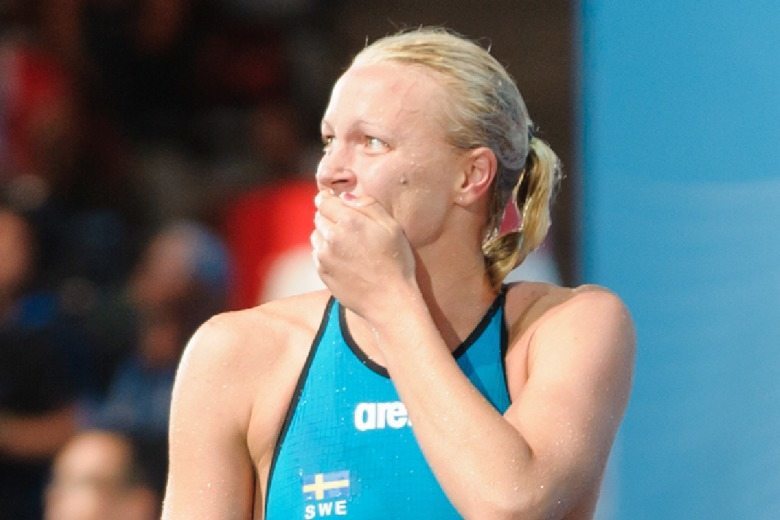 Sarah Sjostrom has become the first woman in history to go faster than 24 seconds in the 50 long course...

Due to the current coronavirus pandemic, the Italian Swimming Federation has decided to move the dates of its Absolute Championships.

Sarah Sjostrom has become the first woman in history to go faster than 24 seconds in the 50 long course meter freestyle at the Swedish National Championships on Sunday.

The video below, courtesy of SVT Play, shows Sjostrom swim to a 23.98, which is better than the 24.05 done by Ranomi Kromowidjojo both at the 2012 Summer Olympic Games and the 2013 World Championships.

This won’t go as any official record for Sjostrom: Therese Alshammar was a 23.88 as the Swedish National Record and Britta Steffen was a 23.73 as the World Record. With both of those times were done in polyurethane suits, which makes Sjostrom’s swim arguably as impressive.

We won’t see her match up head-to-head with Australia’s Cate Campbell this year, as they’ve got no matched meets, but Campbell could get under 24 seconds at the Commonwealth Games or Pan Pacs with how well she’s swimming.

Speaking of rubber suits, Sjostrom is kind of an interesting case. She emerged with a World Record at the 2009 World Championships in a polyurethane suit. At the same time, she swam in a rubber suit, better than anyone else, at just 15 years old, so the road could not have end there. The last year, now at 20 years old, she’s started to come through again at the top of the world, capped off with this swim. She’ll now be in a race to have her “biggest moment” move beyond that 2009 world record.

Notice how the yellow lane lines for lanes 4-5 make it much easier to differentiate lanes (and swimmers).

What’s the likelihood that US Swimming will use yellow lane lines for the center lanes in the upcoming championships? It sure would improve the viewing experience for spectators (whether in person, on TV, or streaming).

See for yourself! SwimSwam recently did a piece that showed videos of Michael Phelps’ Top 10 swims. About half were done in meets with center-lane-lines in yellow, and the other half in meets with all same-color lane lines. You will notice that is much easier to identify and place the swimmers in the former setup. This is especially true when the action has been edited… Read more »

I would like a feature to differentiate Lane 1 from 8. Sometimes it’s hard to tell which side of the pool the camera is on.

Crazy to believe she is only 20 years old!

Was thinking the same thing. Would’ve guessed mid to late twenties for shure.

😯
Miss Campbell will finally have a rival in the 100 free in the next 2 years.