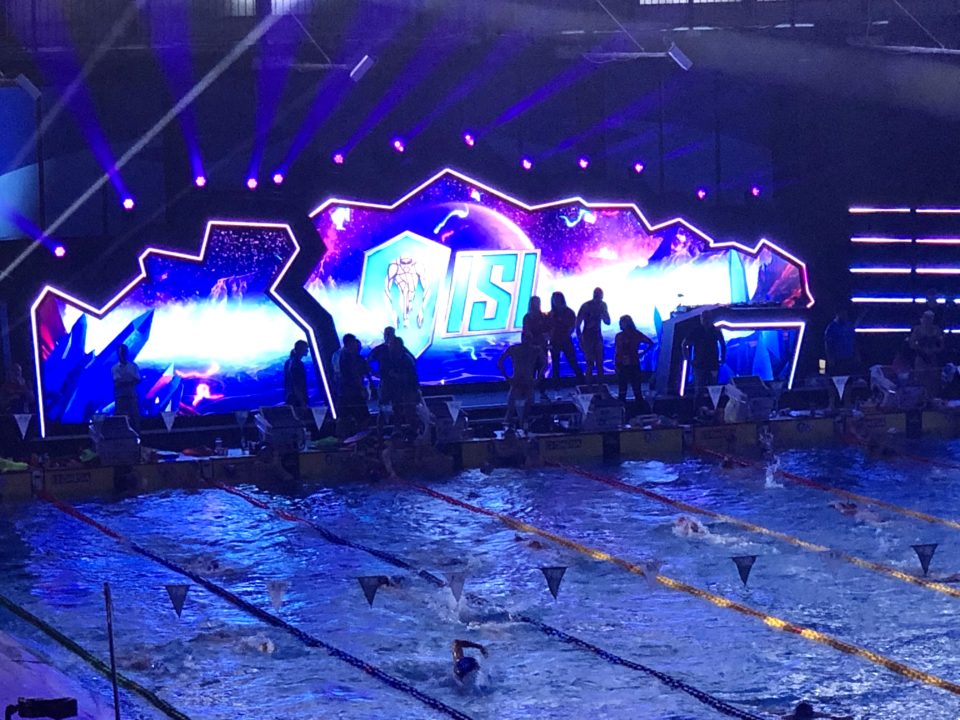 We're four meets into the six-meet regular season of the International Swimming League. We use those four data points to project the Championship meet. Archive photo via Giusy Cisale

We’re four meets into the six-meet regular season of the International Swimming League. Combining those four data points gives us a projection on how the ISL Championship could turn out.

Team Iron is basically out. In order to make Vegas, they would have to win the European Derby and either have the London Roar or Energy Standard finish 4th. On top of that, Iron would have to outscore the 4th place team by 163.5 (if London) or 203.5 (if Energy) – which means a close meet wouldn’t cut it either. Given that London and Energy have won all four meets so far, and Aqua Centurions have finished 4th twice, this seems practically impossible.

The DC Trident have a much better shot than Iron do. In order to make Vegas, they need to beat the LA Current by two places. They could also make it by beating LA by exactly one spot while also outscoring them by 211 points, but this specific scenario seems impossible (in the sense that if DC outscores LA by 211 points, they they almost surely beat them by more than one place), so their most likely route to Vegas is a two-place victory. The most likely of those outcomes would be a Cali-DC-NY-LA finish. It’ll be very hard for DC to do this, but it is technically feasible.

Definitely the expected participants in the Vegas final are the Cali Condors and LA Current from the US and the London Roar and Energy Standard from Europe. The question is – who will take home the inaugural victory? I don’t know. But I can try to do some projections.

– I’m taking times of different people who aren’t necessarily racing each other, and having those other competitors would certainly change their behavior.
– I’m taking lineups of teams that were made with their competition in mind, and just using them for other competition.
– I’m trying to simulate skins. That’s just a caveat all on its own.
– I’m also going to be trying to guess lineups and times, based on not too much information.

FIRST, following the same way I did the initial Oct Meet results, we could just take all the Cali, LA, London, and Energy results from Indianapolis and Dallas and pretend they all raced each other. As with the Oct Meet, I’m going to simulate skins by just taking the top 4 of the 8 results, and then the top 2 of the round 2 results, and then the winner of the round 3 results. If a particular swimmer didn’t make the round that I need a time for them, I’m just going to assign them a time of 60s. For instance, with the Indy/Dallas times, the top four men after round 1 would be Adrian (LAC), McEvoy (LON), Manaudou (ENS), and Chalmers (LON) – but Chalmers didn’t make the 2nd round in Dallas, so he automatically finishes 4th. The simulated top two would then be Adrian and McEvoy – but McEvoy didn’t make the final in Dallas, so Adrian wins by default.

The Indy+Dallas scoring ends up:

With Emma McKeon and Cate Campbell tying for MVP (it should be McKeon on her own, but ISL changed how they do MVP scoring because reasons).

Likewise, the Naples+Budapest scoring ends up:

With Dressel dominating the MVP scoring.

There’s our starting gambit. Just taking the two meets pairwise, London wins going away, with the other three teams in a fairly close race for 2nd, with LA getting it both times.

We can also mix/match. Indy/Budapest ends up:

And Naples/Dallas is the closest of the bunch and the only version of this approach where LA doesn’t get 2nd, although London still wins:

Of course this approach hurts Cali quite a bit, since Dressel didn’t make Indianapolis but many of their other top swimmers didn’t make Naples. A SECOND approach would be to take the top two times from each event across both meets so far. For the relays, I’m taking the top relay and then the 2nd relay that has none of those four people on it. That gives us the following scores:

THIRD, let’s add some noise. So far, I’m only using swimmers’ EXACT results. Chad le Clos went 49.35 in the 100 fly, Caeleb Dressel went 49.36, Tom Shields went 49.39… and there’s 1-2-3. But if we ran this race 10 times, would le Clos win every time? I don’t think so. Dressel’s going to win a few, Shields is going to win a few. Not every race is close (Melanie Margalis and Andrew Seliskar are each over three seconds ahead of their nearest competitor in the 400 IM), but a lot of them are.

What if we added some normal distribution worth of noise. That is, pick some percentage, centered at 0 with a standard deviation of 0.5% and apply that to every time, and run it 1000 times. 0.5% doesn’t sound like much, but that’s still a quarter of a second out of 50 — much larger than the difference in the men’s 100 fly there. Additionally, rather than choosing specific lineup orders for relays based on history, I’m also going to randomly assign people between the “A” and “B” relays (not like, completely random – I’m still picking the top 8 people, I’m not a monster). This can act as a proxy for wanting to decide whether to split or stack relays.

This is similar to the above as expected, but the more interested aspect of this kind of simulation is what it can tell us about places:

That is, London still wins going away, but you can see how close the battle is between the other three teams. LA is the favorite for 2nd place, coin flip for 3rd and 4th.

The relay selection does make a difference here. Completely randomizing the relays gets LA to get 2nd place more than 4 times in 5. Stacking every relay gives us this distribution:

If we widen the noise out to 0.8%, while randomizing relay selection:

Little more noise opens up the race for 2nd a lot. That promises a lot of excitement.

That is a huge swing for Energy. They move up to a slight majority for second, pushing Cali down to favoring 4th place. But very much a tossup. Widen the noise out to 0.8%:

At 0.8% noise, randomizing relays, they even have a shot at winning. And with Tate, a full 22 percentage points higher a shot at finishing second:

All of which is to say, it seems like London is the clear favorite here (I haven’t even added Duncan Scott or Siobhan-Marie O’Connor to their lineup), but it’s really anybody’s game for 2nd.

Interesting! Did you add the noise to the combined results from the four meets?

London Roar is so strong. 99.9% win rate even after adding the noise is ridiculous. I guess it’s not too surprising given the predicted points differential for their win (around 80-100 points higher than second for every comparison except Naples/Dallas). I wonder what happened in the points distribution for those few runs that Roar lost. Do you have the code up on github or somewhere?