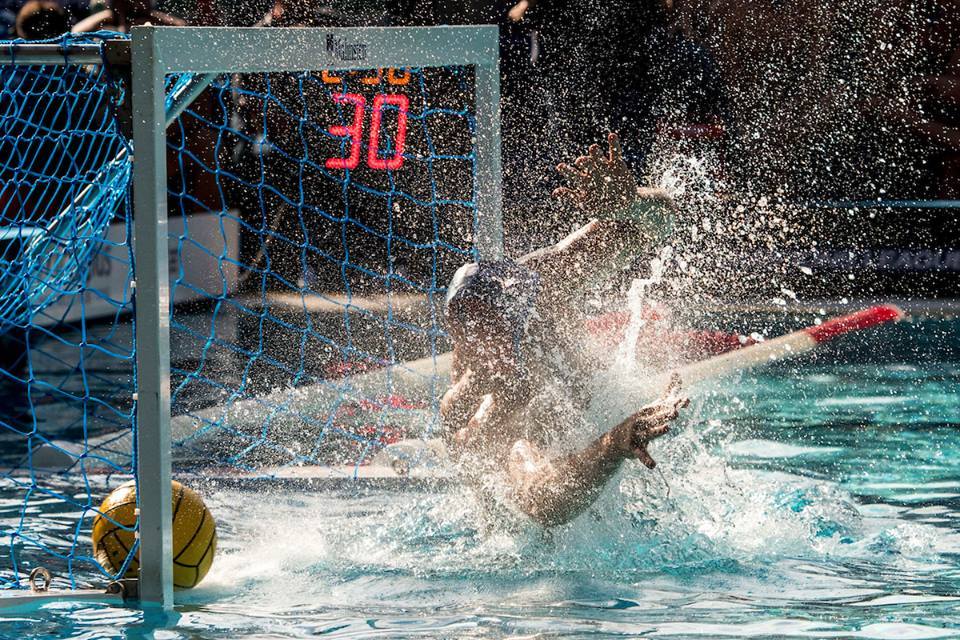 A late winner from Olympiacos prevented Jadran Herceg Novi from causing the first upset of the season though the Montenegrins were close to clinch at least a point in Piraeus. Barceloneta won a fine battle over Szolnok while Jug was two goals down at home against Spandau but staged an 8-1 rout in the second half. Sintez earned its historical first Champions League triumph in a spectacular way by netting 16 goals against Jadran Split.

The first upset of the season was just 83 seconds away but Stylianos Argyropoulos’ fantastic blast saved Olympiacos to drop precious points at home against Jadran Herceg Novi.

The young Montenegrins fought bravely, didn’t crack down when the Greeks jumped to a 3-1 lead, came back to 3-3, trailed 4-3 at halftime and with some luck and fine defending they could even take the lead at 4-5. Maro Jokovic ended Olympiacos’ miserable run and scored again after 10:01 minutes and he levelled again for 6-6 in the dying seconds since Jadran’s leftie Duro Radovic was also on fire and netted his third a bit earlier.

The other new signing of Olympiacos Serbian Stefan Mitrovic regained the lead for the home side in the fourth but Jadran had the reply to that again, and there were still 5:52 minutes to play. The Greeks missed two man-ups though Jadran couldn’t set up any scoring chance at the other end and with 1:23 minutes to go Argyropoulos’ ball hit the top left corner and secured the third win for the last season’s runner-up.

Jug also had to overcome some struggles before the it blew away Spandau in the second half. The Germans began the game exactly the same way as ten days ago a bit further up in the north of the Adriatic coast in Split, took a 1-4 lead and could still hold on for 4-6 at halftime. However, Jug is not Jadran and the Croatian champion started a different match in the second half. They tightened their defense, were more focused in front thus turned the game in the third (7-6), then in a span of 87 seconds they scored three more and decided the match.

In fact, it was a 6-0 rush again, as against Barceloneta in the second round, though it wasn’t that whirlwind-like (ten days ago Jug produced that within one period) – still sealed the Croats’ win. All in all, after a 4-6 first half an 8-1 thrashing followed in the second, Loren Fatovic led the charge with 6 fine goals.

Another great young player of the new wave excelled in Barcelona: Alvaro Granados scored 5 goals while pushing Barceloneta ahead against Szolnok in the big game of the day. The beginning promised something different as Szolnok scored two fast goals and had a penalty to go 0-3 up but Dani Lopez denied Gavril Subotic and that was the wake-up call for the host side though the Hungarians still led 3-4 after eight minutes. Then Barceloneta really arrived to the match, staged a brilliant 5-2 period and Szolnok could not really bounce back from here.

They came closer in the third but when their former player Milan Aleksic sent the ball back after a rebound in the very last second of the third quarter for a 10-8 lead that help to keep the hosts’ psychological edge. In fact, they were more precise in offence, Szolnok opened the critical fourth period with a missed man-up, Granados hit back with an action goal for 11-8 and that broke the rival. Szolnok seems to need to work on its defense in the coming weeks as they finished the match with 14 conceded goals and counts 36 after just three rounds.

In the battle of the winless sides Sintez emerged the winner against Jadran Split. The Russians got the better start in their first home game but the Croats also settled soon and took the lead early in the second at 5-6 only to see the Russians responding with three goals in 2:19 minutes. Jadran’s defense didn’t work that well in third either when Sintez managed to extend the gap to three goals (11-8).

Tensions ran a bit higher, a scene with some punches and blood led to a double 4min expulsion (both teams buried its respective penalty), then Jadran missed a 5 on 4 (usually easier than the normal 6 on 5), Stepan Andryukov netted from the counter for 13-9 and that proved to be decisive. In the fourth Sintez added three connecting goals after 13-10 to earn a really remarkable historical first win in the Champions League.