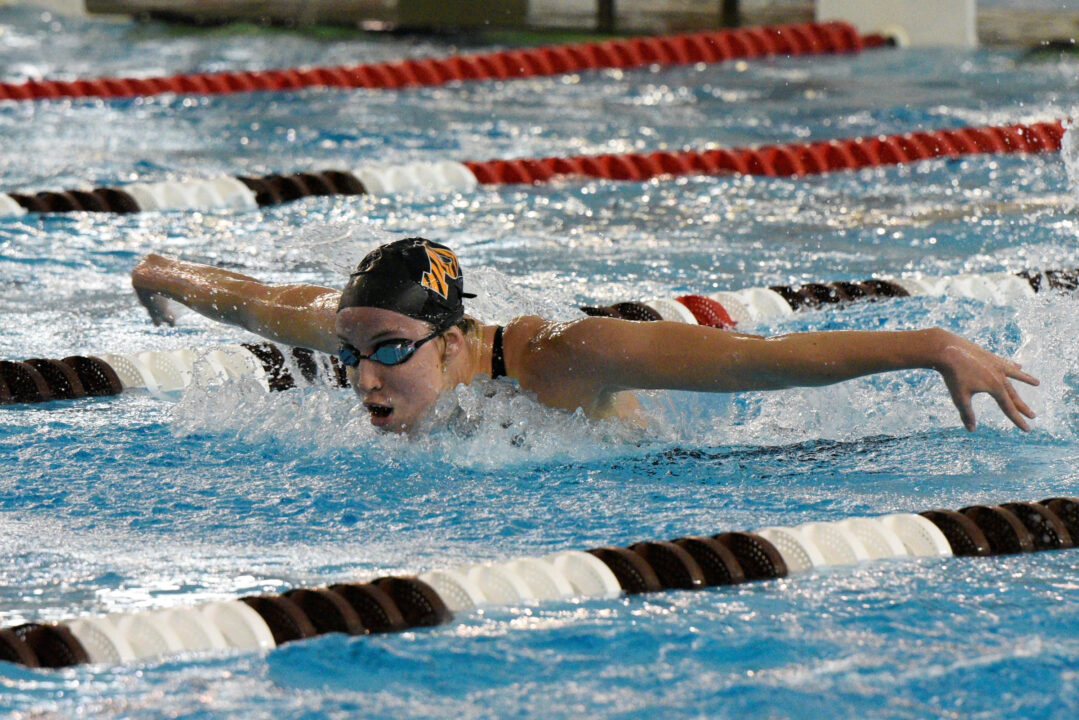 The Princeton Tiger women swam a rare doubleheader dual on Friday, beating Columbia in the morning and Navy in the afternoon. Current photo via Erica Denhoff/Princeton Athletics

The Princeton women took on a grueling schedule on Friday, swimming not one but two dual meets after last week’s Navy dual was rescheduled to Friday. The Tigers competed against Columbia in the morning and then returned in the evening to take on Navy, emerging victorious in both meets.

The morning dual featured a unique event lineup, including events like the 100 and 300 IM and 50s of stroke.

Leading the way for the Tigers was junior Amelia Liu, who won both of her individual events in the morning meet. The Frisco, Texas native started her morning with a wire-to-wire win in the 200 free, touching first in 1:50.13 to win by a half second. Later on, Liu returned to dominate the 100 free by a full second, winning in 51.06 ahead of Columbia’s Aziza Ganihavona. Prior to Friday, Liu’s season best in the 200 free stood at 1:50.27 in the 200 free and 50.11 in the 100 free, though she would return in the nightcap against Navy to post a new 200 free season best.

Also winning two events for Princeton was Christina Bradley, who won the 50 free and 50 fly. The junior from Sammamish, Washington posted the top time in the 50 free in a swift 22.81, and later returned to win the 50 fly in 24.53. Bradley’s 50 free marks a new lifetime best for the junior and her first time under the 23 second barrier.

Princeton All American Ellie Marquardt also took home a victory in the morning, winning the 300 IM in 3:09.79, 2 seconds ahead of Columbia senior Mary Pruden. Marquardt, a Virginia Beach, Virginia native who is primarily known as a distance freestyler and IMer, also flashed some speed, finishing 2nd in the 50 free in 23.65.

Columbia’s won two individual events on the day. The first  event victory came in the 100 back, where senior Mary Pruden touched first in 55.68, a new lifetime best for the Raleigh, North Carolina native. Also taking an event win was Lion junior Olivia Jubin. The Alexandria, Virginia native touched first in the 100 IM in 56.69, three quarters of a second ahead of Princeton junior Nikki Venema.

Princeton’s freestyle group led the charge, with the Tigers winning the 50, 100, 500 and 1000 free on the day. Two of those victories came from sophomore All American Ellie Marquardt, who swept the distance events. In the 1000, the Charlotte, North Carolina native was dominant, posting a season-best 9:53.83 to win by over 12 seconds. She dominated the 500 later in the meet as well, posting another season best of 4:47.28 to win by nearly 8 seconds.

Also winning freestyle events for the Tigers were juniors Nikki Venema and Amelia Liu. Venema, a Virginia Beach, Virginia native won the 100 free in a new season best of 49.72 and also finished as the runner-up in the 200 free in 1:48.82. Her classmate Liu, a native of Frisco, Texas, won the 50 free in 23.28, off of her season best of 23.06. She also finished in third in the 100 free in 50.88, slightly faster than her swim from the morning meet against Columbia.

Navy was led by their diving program, which won both the 1 and 3 meter events. Senior Hannah Montau, a native of Germantown, Maryland, won the 1 meter with a score of 277.05 and won the three meter with a 318.45.

Princeton will return to action next weekend in the annual Harvard-Yale-Princeton tri meet in New Haven, Connecticut. Columbia will welcome Ivy League foe Dartmouth to New York City on February 5th, while Navy will host the Navy Invitational next weekend in Annapolis.