PREVIEW: What to Watch For at the 2018 Art Adamson Invitational 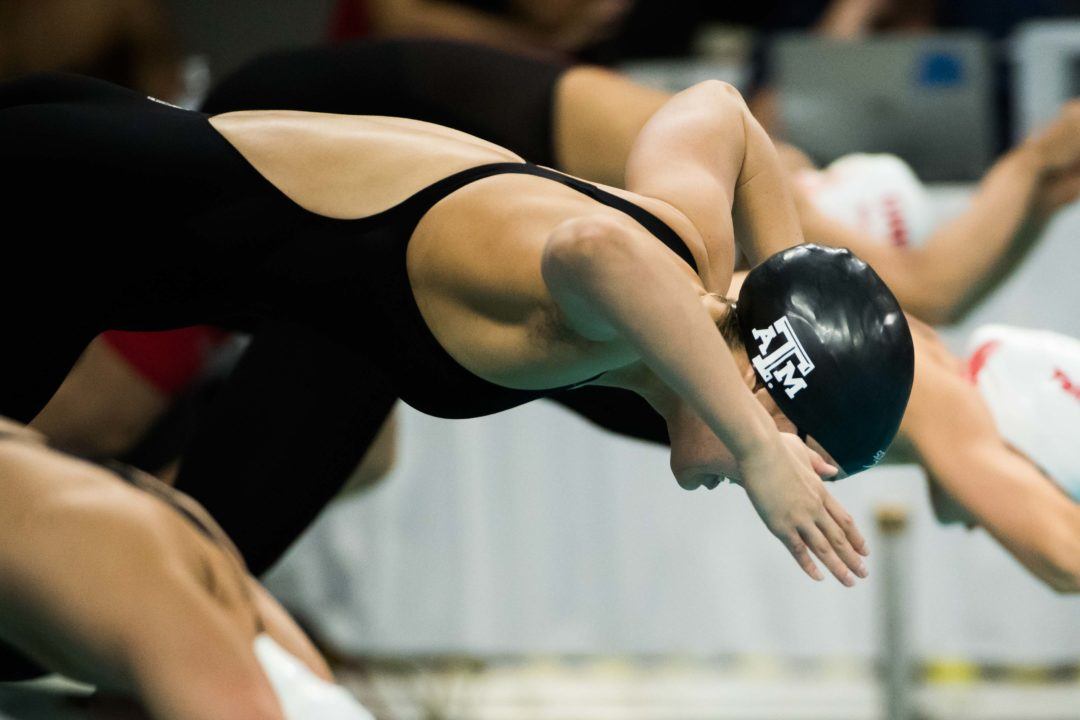 It's Aggie Nation, and the hosts Texas A&M look to dominate their own mid-season invite this week. Archive photo via Mike Lewis/Ola Vista Photography

Follow along here for live updates and analysis as racing gets underway on night 4 of the Canadian Olympic Swimming Trials.

Notably, the Stanford women, who typically compete at this meet for their mid-season rest meet, will be at the Ohio State Invite instead. The Cardinal dominated this meet, with plenty of eye-popping times from their stars, but they won’t be in attendance this time around.

The top team to watch, on the men’s and women’s side, will be hosts Texas A&M.

Questions loom on their women’s side — they’ve grown at a steady pace since placing 10th at NCAAs in 2011, going to 6th in 2012, then 4th for four-straight seasons, then 3rd the last two. They’ve also won the last two SEC titles after unseating powerhouse Georgia. But, with a huge class having just graduated, this is definitely a different team and the Aggies need a lot of talent to step up and show up. Steve Bultman has shown that he can develop talent very well, though, and this first suited meet for the Aggies will help gauge where they’re at as a team.

As for the men, this is a team that hasn’t finished in the top 10 at NCAAs since 1999. But, they’ve jumped from 25th in 2016 to 16th in 2017 and 14th last year, and they have stepped up their recruiting game, too. Their freshman class is highly-touted, and the team is excited about its future.

NAMES YOU KNOW TO WATCH

Not surprisingly, Sydney Pickrem is the name to watch at this meet, if you had to pick just one. The A&M senior won the 200 IM at this meet last year with a blazing 1:53.38, and added another win in the 200 breast (2:05.96). Senior Claire Rasmus finished 2nd in the 100 free, 200 free, and 500 free last year, and without Stanford present, she could complete the triple. This isn’t so much about wins, though, as it is about securing NCAA invites, so note that a swimmer will probably be happier placing 5th in an event with a likely invite time than winning an event by 10 seconds and not securing an NCAA ticket.

Anna Belousova and sophomore butterfliers Jing Quah and Taylor Pike could make some noise, and we’ll get to see the A&M freshmen in their first suited competition as Aggies.

For the men, Benjamin Walker has taken over breaststroke duties as Jonathan Tybur and Mauro Castillo no longer have NCAA eligibility. He will be a key player for the Aggies come March, likely as their medley breaststroker, and he’s been more of an IM’er until now.

NAMES YOU MIGHT NOT KNOW, BUT SHOULD STILL WATCH

First-year Emma Carlton could end up being crucial to A&M’s success come March, as she’s a very strong sprinter in fly, back, and free, the three events that grew much weaker with All-American Beryl Gastaldello’s graduation. Carlton hasn’t produced many quick times yet this year, but not all freshmen pop right off the bat.

Shaine Casas has excelled in his first semester with the Aggies, and he was one of the top recruits that head coach Jay Holmes landed in this freshman class. He’s already been within a second of his lifetime bests in the 100 free and 100 back this year in dual meets, while his 1:45.29 in the 200 back in their Texas dual was actually a lifetime best. That always bodes well, and a fast-improving Casas may end up producing big dividends by the end of the year. We’ll see where he’s at with a little rest and a suit, now. No Aggie man broke 20.0 in the 50 at this meet last year, but Casas and fellow freshman Clayton Bobo have bests sub-20, so that could definitely change this time around.

Among other teams, there are definitely going to be some great performances. Coming out of LSU, Karl Luht and Thomas Smith are both ranked 5th in the 100 back and 200 back, respectively, in the SEC this year. Luht is one of just five swimmers to have been under 48.0 thus far in the season. Meanwhile, Hawaii should have a strong showing, too. Metin Aydin, a backstroker/IMer, and Olli Kokko, a breaststroker, are two swimmers who should be vying to score individually at NCAAs come March. Phoebe Hines could surprise with a big showing in the distance races– she placed 12th in the mile at NCAAs last season.

Meanwhile, the Boise State women are competing in their first season since head coach Jeremy Kipp made the move to Northwestern. The Broncos still have a strong mid-major program, led by Ally Kleinsorgen, Abbey Sorenson, and freshman standout Lauren Vitort. Sorenson, the reigning Mountain West conference champion in the 50 free and 200 back, has the potential to upset for a win in at least the 50 free, an event in which the Aggies are weaker this season.