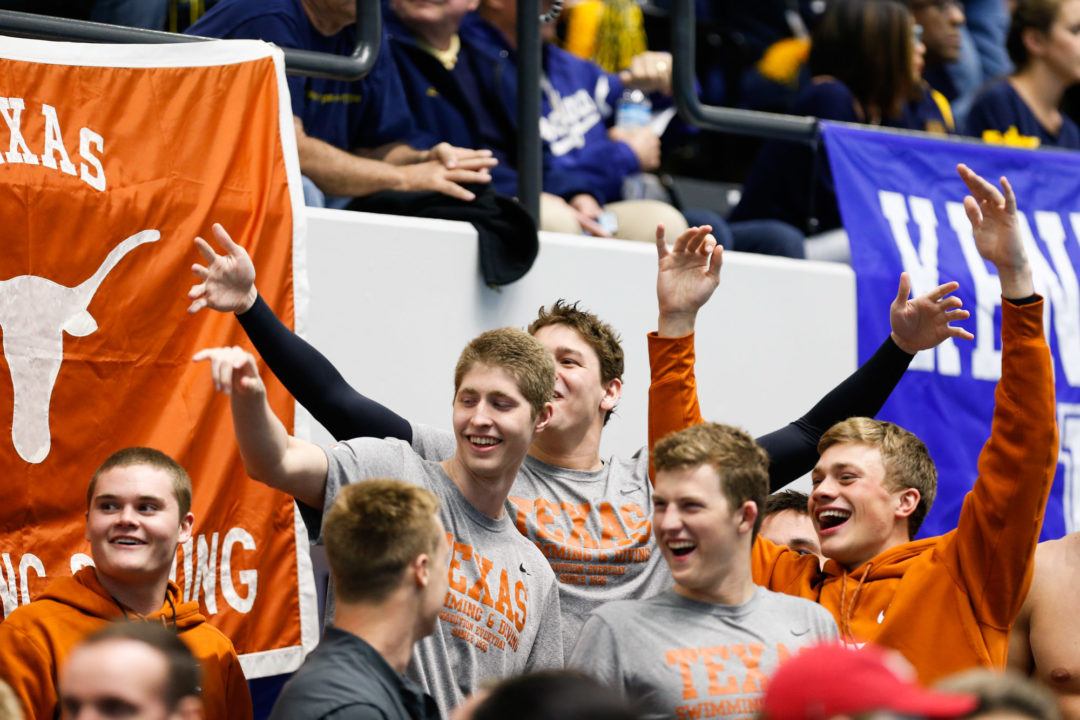 Getting to see the defending national champions at work was a treat.

And not just because they’re the defending national champs.

Practice starts at 3:00pm, but the UT men get there early to play 6-square (4-square but with 2 more squares). The goal was to get to the King Spot and stay there for as long as possible. Once you had gotten out 3 times, you were out of the game for good. For the amount of fun they had doing it, and how competitive they got with it, I felt like I was a kid at recess. It was a blast, and totally caught me off guard.

According to Eddie, Texas goes fast on Tuesday and Friday. By the end of this week, the Texas guys were pretty beat up, so Eddie threw something at them he thought they could handle. 8 rounds of 3×25, doing a round every 3 minutes. If you did them free, they were on :15, back/fly was on :16, and breast was on :18. Go fast. There were some good battles going on, and you could tell the guys worked hard and got tired.

My favorite part of practice was a Hook ‘Em tradition; literally, it involved hooking. The guys threw their snorkels across the pool and tried to hook them on the far flags. Usually they did this before they got in the pool, and for each snorkel that was hooked, they got in an extra minute later. However, at this practice after they went through their sprint set (and did another 4 rounds of the 3×25 kick), John Shebat made a deal with Wyatt that if he hooked his snorkel right then and there, they could warm down instead of going through the kick set again with fins.

I was on the other side of the pool filming the women’s practice when this happened, so sadly I didn’t witness it. However, I did hear the entire men’s team hooting and hollering when Shebat hooked it perfectly on the second set of flags and earned the boys their warm down.

These are the kinds of videos I love from Swimswam and Floswimming. It’s so cool getting a look into what some of the best programs in the nation do, not only for their sets, but also for a glimpse of team culture. Tate and Brett one upping each other on 50’s is hilarious, and some friendly trash talk is definitely something that pushes guys to be faster on the day to day grind. It’s no wonder a team like Texas stays at the top so long, every day is a competition.
More videos like this Swimswam!

That’s why SwimSwam is more successful than Swimvortex.

I agree these videos are fantastic, would love to see more.

What a great video and a great team! It would be great to see other videos like this

How did nc state train with them for a week? They just missed a week of class?

“last summer” was the key to your question.