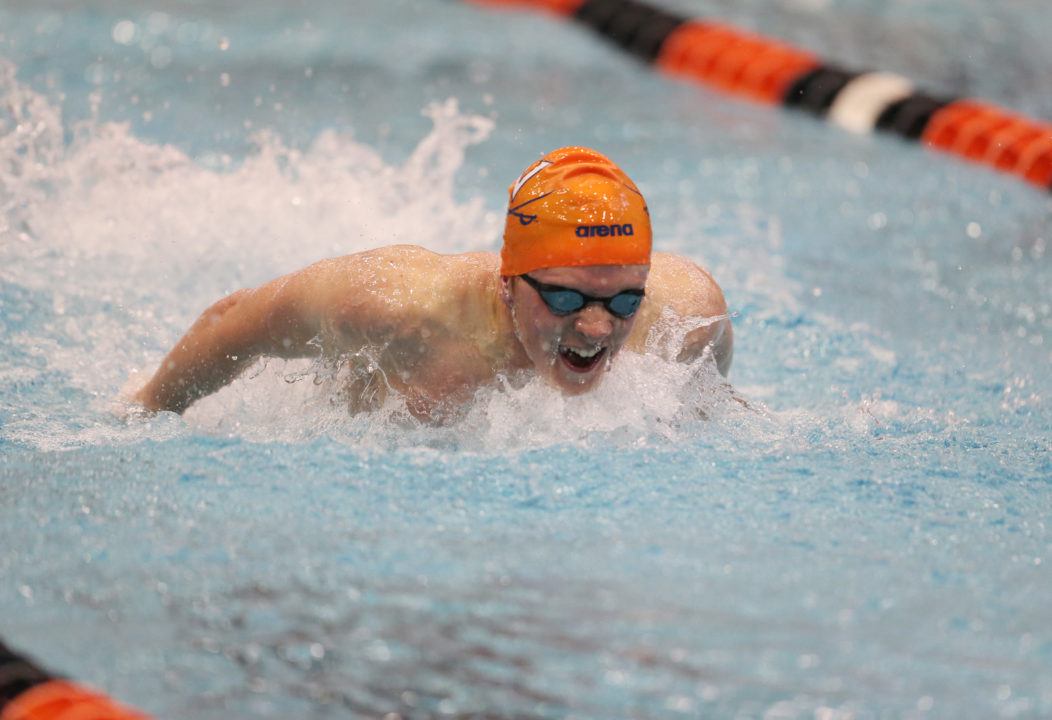 The Cavaliers opened and closed the day with AFC pool records as they topped the Tar Heels, 171.5-125.5, for the UVA seniors’ last home meet.

With freshman Kate Douglass leading off on backstroke in a quick 52.39, a new personal best for her, Alexis Wenger, Morgan Hill, and Paige Madden brought UVA a 3:34.93 in the 400 medley relay, winning by over three seconds and taking down the first pool record of the day.

Freshman Maddie Donohoe kicked off the individual events with a 9:49.99 in the 1000 free, winning by over 12 seconds. Donohoe would come back during the second half of the meet to win the 500 free in 4:55.17. Paige Madden won the 200 free for the 2nd day in a row, touching two seconds ahead of the rest of the field in a 1:47.89, as UVA swept the distance free events.

Douglass also won two events, sweeping the fly events. According to the USA Swimming database, she hadn’t swum the 200 fly since 2017, and her previous personal best of 2:04.91 came from 2016, but it seemed to come back easily to her, as she won in 1:56.04. Douglass has set new personal bests this year in eight of the 13 standard college swimming individual events. She returned toward the end of the meet to win the 100 fly in 52.34, setting a new pool record.

Alexis Wenger earned the breaststroke sweep by winning the 1:00.54, just ahead of UNC’s Caroline Hauder (1:00.70). Wenger also touched first in the 200 breast, but ended up drawing a disqualification (the results do not specify why).

Hill, Lexi Cuomo, Kyla Valls, and Douglass closed out the day with a 1:29.86 pool record in the 200 free relay, with Douglass’s 21.81 anchor leg proving to be the difference in a fairly narrow 0.42s victory over the Tar Heels.

We’ll note here that just like yesterday, UVA had a few swimmers put on tech suits. All such swims on the women’s side appear to have been marked exhibition, including Caroline Kulp 200 fly swim, where she managed to hit 1:56 for the second time in two days.

While the Tar Heels never seriously threatened the Cavaliers’ lead, they did have a strong showing in several events as they battled the whole day.

The Tar Heels were also especially solid in the sprint free events. Countie tied UVA’s Hill for the win in the 50 free, while Caroline Hauder held off Hill to win the 100 free, 49.14 to 49.46. UNC gave UVA a bit of a scare in the 200 free relay, as Hauder and Countie  split 22.23 and 22.10 on the middle two legs, putting UNC in the lead, before Douglass ran down Lindner with the aforementioned split.

UNC kept things close early on, but UVA pulled well ahead during the second half to win 181-118.

Two pool records went down on the men’s side, with the first one coming in the first event of the day, the 400 medley relay. Joe Clark, Keefer Barnum, Konnar Klinksiek, and Ryan Baker put together a 3:12.25 to win the 400 medley.

Even though it came near the end of the meet, we’ll go ahead and highlight the other men’s pool record here. With the outcome of the meet already decided, senior Ted Schubert threw on a tech suit to go after the 400 IM pool record. That swim had an extra special significance, as an Instagram post by associate head coach Tyler Fenwick pointed out.

For those who aren’t aware, Fran Crippen was a UVA All-American distance swimmer, whose tragic death while swimming at a FINA 10k open water event in the UAE in 2010 has drawn attention to the issue of safe water temperatures for open water events.

Fellow senior Ryan Baker also doubled for the Cavaliers, sweeping the sprint frees in 20.37/44.50 in a pair of narrow victories. Matthew Otto was UVA’s other two individual event winner, starting the individual competition with a 9:12.97 in the 1000 free, then later winning the 200 breast in 1:58.97.

A quartet of UVA seniors did suit up, however, for the last event of the day, the 200 free relay, where senior Baker, Clark, Schubert, and Henry Keel appeared to be going after the pool record. They fell short, but did win the event with a 1:20.34.

As we said, UNC managed to keep the score fairly close for the first half thanks to lots of 2nd and 3rd place finishes in the pool and a pair of diving wins by Fabian Stepinski, Ultimately, however, the Tar Heels only got a single swimming win, as Valdas Abaliksta just edged UVA’s Barnum 54.08 to 54.17. Abaliksta nearly got the double, but came up just a couple tenths short in the 200 breast. Dimitrios Dimitriou and Jack Messenger each pulled in a pair of 2nd place finishes, the former in the 200 free and the 500 free and the latter in the 50 free and the 100 free.

CHAPEL HILL — The Tar Heels traveled home from Charlottesville Saturday night after a challenging dual meet against Virginia. Sophie Lindner, Fabian Stepinski and others had remarkable performances, but both teams lost the duals to Virginia’s No. 17 men and No. 6 women, 181-118 and 171-125 respectively.

“I’m extremely proud of our team for competing well against one of the nation’s best teams,” said head coach Mark Gangloff. “We are in a great position for this time of year.”

Both the men’s and women’s teams placed second in the 400-yard medley relay, and North Carolina’s women also finished second in the 200-yard freestyle relay. Coach Gangloff described the relay performances as “a primary indicator of their desire to represent UNC well.”

Sophie Lindner swam exceptionally for the women, placing first in the 100-yard backstroke and the 200-yard backstroke with times of 53.66 and 1:55.59. Grace Countie, Lilly Higgs and Caroline Hauder also contributed significantly in various events. In the 50-yard freestyle, Countie struck a tie for first place with Virginia’s Morgan Hill.

North Carolina’s divers had a strong meet with Fabian Stepinski and Alex Hart placing first and second, both with personal records, in the men’s 1-meter competition. Stepinski also placed first in the men’s 3-meter, and Emily Grund placed second in both the women’s 1-meter and 3-meter.

“I am very happy with the team today,” said Yaidel Gamboa, head diving coach. “They were pushed out of their comfort zone and responded really well. We just have to keep working hard and trust the process.”

The Tar Heels travel to Duke next Saturday for their last dual meet of the season before competing in the ACC Championships at the end of February.

CHARLOTTESVILLE, Va. –  The Virginia men’s and women’s swimming and diving teams set five facility records in their win against North Carolina on Saturday (Jan. 25) at the Aquatic and Fitness Center. The No. 6 Cavalier women defeated No. 15 North Carolina 171.5-125.5 and the No. 17 Cavalier men topped the Tar Heels 181-118 to close out the regular season.

The men’s 200-yard freestyle relay team of Baker, Clark, Schubert and senior Henry Keel (Memphis, Tenn.) closed the day with a first-place finish and a time of 1:20.34.

“Happy for our teams finishing off a tough weekend of racing with some great wins against a much improved UNC program,” head coach Todd DeSorbo said. “Mark (Gangloff) is doing a great job with the Heels and they kept us on our toes the entire meet. It was a quick turnaround from last night, coming off the NC State meet and having to perform at a high level today. In addition to that, this was our recognition meet to honor our fourth-years, so there was emotion abound. I want to thank each of them as they’ve been such great ambassadors of UVA swimming and diving as well as the University itself.

“Both the men and the women bounced back great and backed up their performances. We had three of our four relays break pool records today, that says a lot with the history and tradition of this pool and program. I was impressed by our distance swimmers coming out today and outperforming what they did yesterday in the 1000. We also had quite a few people swimming some events that they don’t normally to show off their versatility. We had a handful of double event winners including Maddie Donohoe, Kate Douglass, Sydney Dusel, Ryan Baker and Ted Schubert. We are beginning to see quite a few of our first-years come into their own as well, which is what we always hope for this time of year. Now we begin to zero in on the championship season. I think there will be some good things in store for the Hoos coming up. Our squads are deep, and they are balanced. It’s going to be fun to see what they accomplish in February and March during championship season.”

The Cavaliers will head to the Greensboro Aquatic Center in Greensboro, N.C., on Feb. 19 for the women’s ACC Championships. The men’s conference meet will begin on Feb. 26.

All of the ingredients are there for UNC to get to a top tier NCAA program. It’s a great academic institution, a great location, great facilities & the new blood of a top young coaching staff is a tremendous boost. It’s also great for NCS, UVa, Louisville, etc. You want quality rivals. You want a fast conference meet.

Absolute monster swim by Schubert here. So much heart put into the race

I think part of that is that the duel meet formal doesn’t show the NCState women’s full strength. UVA is lap appearing more sprint heavy than NCState atm. There is a limit in how many events some swimmers can swim and the number of entries per event.

I think UVA switched swimmers around against UNC as well for a chance to swim other events.

They also just swam significantly slower all around