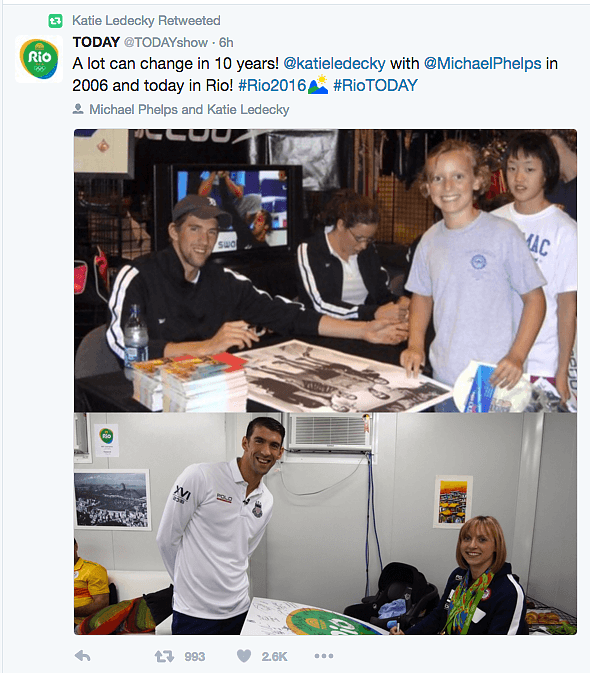 Ten-years after a young Katie Ledecky got an autograph from Michael Phelps in 2006, the pair of multi-time Olympic gold medallists recreated the photo today in Rio at the Olympic Games.

Ten-years after a young Katie Ledecky got an autograph from Michael Phelps in 2006, the pair of multi-time Olympic gold medallists recreated the photo today in Rio at the Olympic Games.

A lot can change in 10 years! @katieledecky with @MichaelPhelps in 2006 and today in Rio! #Rio2016 #RioTODAY pic.twitter.com/cYwUyz3PZO

Ledecky’s dominance comes at the same time that Phelps is bidding his final farewell to the sport of swimming. Assuming Phelps doesn’t come out of retirement, this Olympic team will be the last national team that Phelps is on with Ledecky.

Following in his footsteps, Ledecky now leads the charge of change for the sport, redefining what’s possible in the distance freestyles. Her absolute dominance in her racing resembles that of a 2007, 2008 Phelps who was undefeated in international events and winning them by body lengths.

With the torch passed, it’s now Ledecky’s turn to dominate the sport as Phelps did for so many years.

thanks for confirming! They are going to be teammate again in Stanford soon.

That’s also Kate Ziegler sitting next to Phelps. Katie would break her world record only 7 years later. Ledecky had her sights set higher than Ziegler, and modeled her stroke after Phelps’.

Janet Hu was the dominant PVS age grouper of her generation – the one everyone expected to emerge as the potential Olympian. Great underwaters, crazy practice schedule even as a 6 year old, with the all to familiar PVS age grouper peak at 17-18. Her brother was almost as dominant, ended up hanging up the goggles after his freshman year at Penn. Janet has been a great supporting player for Stanford, but the wave has obviously crested.

Also worthy of note is that Ian Thorpe is on the TV screen behind Phelps in the first picture. Arguably the three biggest names in swimming in one picture!

“Hi Mike, big fan. Can you share your doping regimen secrets with me?”

Have you herd training 7 days a week, for 24 years and being a little talented !!!

I’m curious, do you really think he was doping before he was a teenager? Dod he make a lab out of his erector set? At 11 Bowman told Phelps’ mom that he could be something special. It’s not like he came from nowhere. He changed the way butterfly is swam.