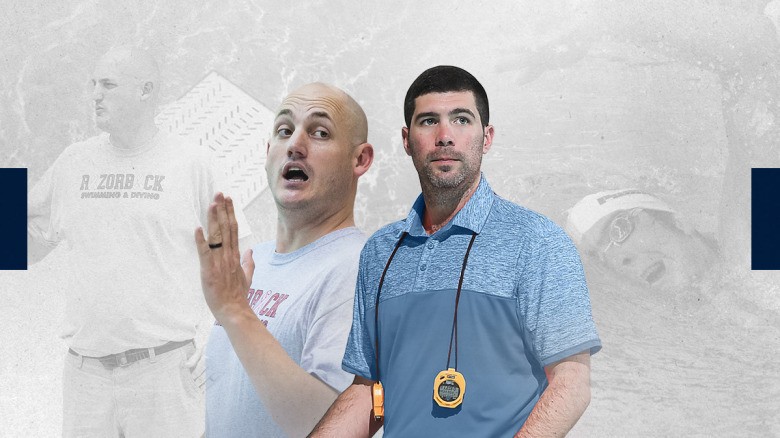 Penn State has announced the addition of two new coaches to its swimming and diving staff. Penn State alumnus Josh Graham joins the program as an assistant swimming coach, while Jeff DiNicola will become the program’s head diving coach.

Graham comes to the program after serving as an assistant coach at Davidson since the summer of 2012. There, he coached the teams’ men’s and wmoen’s middle-distance and distance groups.

That makes him an apt replacement for Erik Posegay, who left the program this summer to take an assistant position at the University of Wisconsin. Posegay was the primary coach of the Penn State distance group.

That group last year included junior Ally McHugh, who finished 2nd behind Katie Ledecky in the 1650 free and this summer won the 400 IM USA Swimming National Championship and earned a spot on the Pan Pacs team that begins competition on Thursday in  Tokyo.

During Graham’s time at Davidson, he coached 15 conference champions and his athletes broke more than 30 school records.

Prior to Davidson, Graham was the lead senior coach at SEVA in Newport News, Virginia, where he worked primarily with swimmers transitioning to the team’s senior group.

Graham graduated from Penn State in 2009 with a degree in criminology, where he was a 4-year member of the varsity swim team. In high school, he set a Virginia state record in the 200 free.

DiNicola comes from Dallas, Texas where he spent the last year-and-a-half with the Mustangs in the Sun Diving Team. He previously was the head diving coach at Arkansas from 2013-2016 where he coached the team’s first NCAA qualifier since 2008. In 2014, every single one of Arkansas’ divers qualified for zone competition. From 2003-2005 he was the diving coach at Nebraska, and before that he worked at New Mexico and his alma mater Southwest Missouri State. In his first season there, he was the Missouri Valley Conference Diving Coach of the Year. As an athlete, he was a two-time MVC Diver of the Year.

And how about a new pool, which they soooo badly need???

Unless something has changed, Penn State has planned to add a 10 lane indoor 50 meter pool within the next 5 years. The construction is part of their 20 year master plan. Swimswam posted an article about it maybe a year ago.

We did. When we’ve asked them about it for follow-up recently, we’ve gotten a very terse “no comment” from their media relations folks, which leads me to believe that the master plan might have gone off the rails a little bit…

Not off the rails, but funding realities are, well, real. Who wants to step up and write that $50 million check? Absent a sugar daddy, funding options resort to 1) loan with debt service, 2) student activity fees for a “university community” facility, or 3) a public/private aquatic cooperative to serve the Centre region. All 3 options involve significant negotiation, multiple stakeholders… and time. The other sticking point is campus location for the pool. Athletics prefers a new location near the track and football stadium. This would allow for ample parking for events and community use. PSU admin prefers a location near the existing pool – to be more convenient for student & staff use. That disagreement must be resolved,… Read more »

Jeff did a GREAT job while he was at NM!!! Good luck my friend, excited to see what you do at Penn State!!!