Peaty to FINA: ‘Ban Me… They Know They Can’t’ 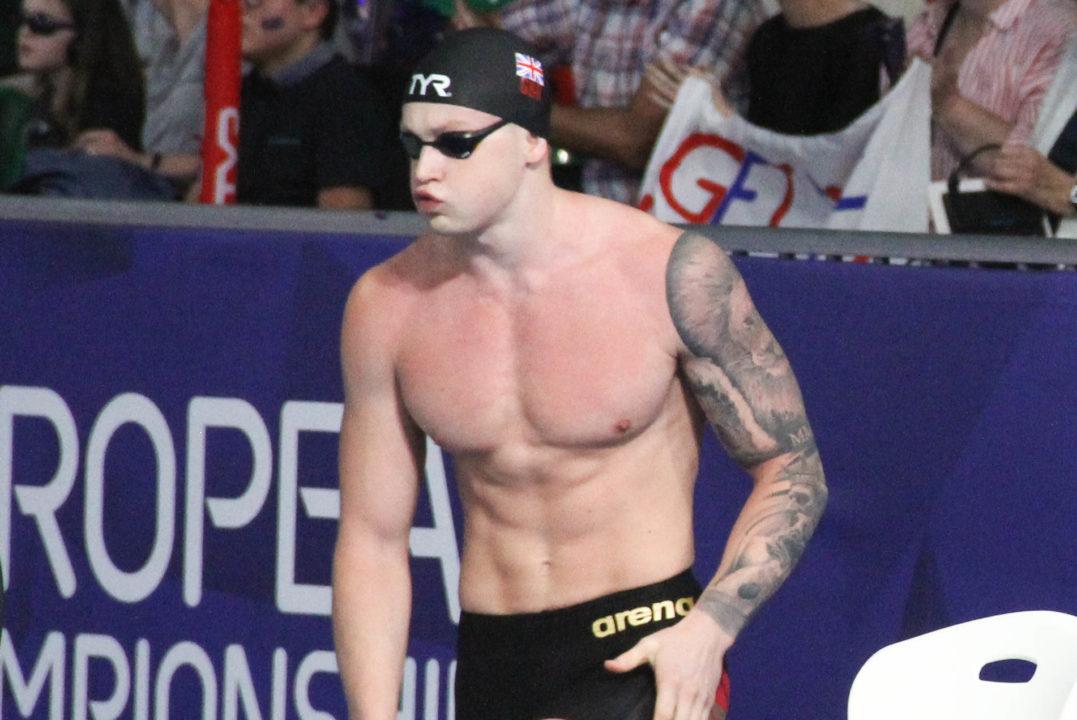 “I don’t care, ban me if you’ve got to,” Peaty said in the BBC report, which you can read here. “I’m not bothered because at the end of the day they know they can’t.

“They can’t get away with it because you’ll lose all of the respect from the athletes and you can’t bully them.”

Peaty’s pointed comments came after the ISL Summit, a meeting between athletes and organizers of the International Swimming League (ISL), which wants to organize a series of swim meets, but has had conflicts with FINA in getting the meets approved.

Peaty also commented on FINA’s launching of the Champions Swim Series, considered by some to be a response to the ISL format. Peaty called the decision “embarrassing and offensive.”

“£4m in prize money is nothing in terms of what they’ll make off that league – they’ll make much more,” he said in the BBC report. “We need transparency and 50-50 split of the profits.

“I love my sport to the moon and back but the main reason people quit swimming all over the world is because there isn’t enough funding.

“I want to secure the future for the kids who are going to be winning Olympics in 20 years and hopefully making a living out of it.”

Australian coach Jacco Verhaeren also made waves this week, calling the new FINA series an “ad hoc” event and a “random” addition to the yearly meet schedule. “Most athletes and coaches have locked their plans in all the way to the Tokyo Olympics,” he said to The Australian.

The day after Peaty’s statements, FINA sent out a press release denying it had threatened bans for athletes, though SwimSwam was told that in an Oct. 30 email, FINA specifically referenced one of its general rules calling for bans of 1-to-2 years for FINA members who have relationships with a “non-affiliated body,” while making clear the ISL and the loosely-connected Energy for Swim 2018 event was not authorized.

Could you imagine banning him and all the other stars for waning better pay and equal pay outs. Worlds next year would be a joke. It’ll look like a little open meet. I mean have you watched the heats before the circle heats at worlds. It’s a joke.

The power of ego is usually crushed when met by evil.

I’m mostly curious how all of this will shake out in the end. Right now, I can honestly see the Olympics 2020 being sacrificed by top swimmers to make a stand for the future. An Olympic medal is nice, but being remembered for completely changing the landscape for pro swimmers in the future is bigger. Would be such a huge middle finger to FINA.

This is so good for swimming.. get much more $$$ to the swimmers and less in the exec’s pockets.

No wonder he is so strong, carrying two twenty pound medicine balls around in his suit every day.

There have been dozens of times in sports athletes have taken the “they can’t afford to” attitude only to find out “they” can. Memories and athletes careers are very short. Institution memory and strategy is much more long term. 50-50 split of profits? That doesn’t happen in any pro sport with owners. FINA is the organization the IOC recognizes. If FINA had banned Peaty before Rio, no one in the world would know who he was outside of SwimSwam readers — that FINA/IOC/NBC worldwide exposure made him the dollars he’s flaunting now. The reality is FINA knows they hold all the cards. Peaty goes down, people will just talk about Dressel instead. You don’t see Dressel, Simone, Sarah, Schooling, Ledecky… Read more »

Ol’ Longhorn makes some sense. You may not agree with him, but the main point he raises — who is being quiet now, and why — is a good one to pay attention to as this plays out.

When you write out a very long and well thought out thesis on this topic explanaining how FINA has already caved to pressure by creating a new Swim Series with prize money after 17 different Olympic gold medal winning athletes declared that they were going to attend the Energy For Swim series. Then you combined that with statements about how there’s currently a lawsuit going on with Hosszu, Shields, and Andrew against FINA for anti trust laws which echos what happened last year with Dutch Skaters attending speed skating competitions in South Korea (and won the case). And how the likes of Cate Campbell are just as outspoken as Peaty on this topic…but then your phone dies and erases the… Read more »

Well said —- but. (Can you provide me a link to the Dutch speed skaters lawsuit —- google can’t find it for me when I put in those terms?). It’s one thing to be outspoken, it’s another to actually take a hit when a corporation uses its leverage. How many NFL players kneel when the National Anthem is played? What happened to the athletic career of the guy who started it? Cate Campbell may not even make it to Tokyo with her shoulders, and she was a complete bust at Rio. As for the Dutch speed skaters? They won 2/3 of more of the Winter Olympic medals — THEY HAD LEVERAGE as a group. It would take Team USA speaking… Read more »

Thanks. There’s an obvious out that FINA has to easily win based on this and another decision: all it has to do is make a case for “legitimate sporting concerns” rather than just “commercial interests” in making sanctioning and eligibility decisions. To quote the summary: “To this end, the Commission has noted that ISU is entitled to amend its rules to take into account matters such as protecting athletes’ health or preventing doping (or other such legitimate concerns).” All FINA has to do is make a case about preventing doping. With that being the case, not sure that having a guy jacked beyond normal bounds (Peaty), or the Iron Lady (always suspected/never proven to dope) as the poster boy and… Read more »

Sarah is there, too.
https://swimswam.com/29-olympians-a-world-champion-attend-isl-meetings-in-london/

Shots fired! Big Double Birds thrown at FINA with that comment, love it…