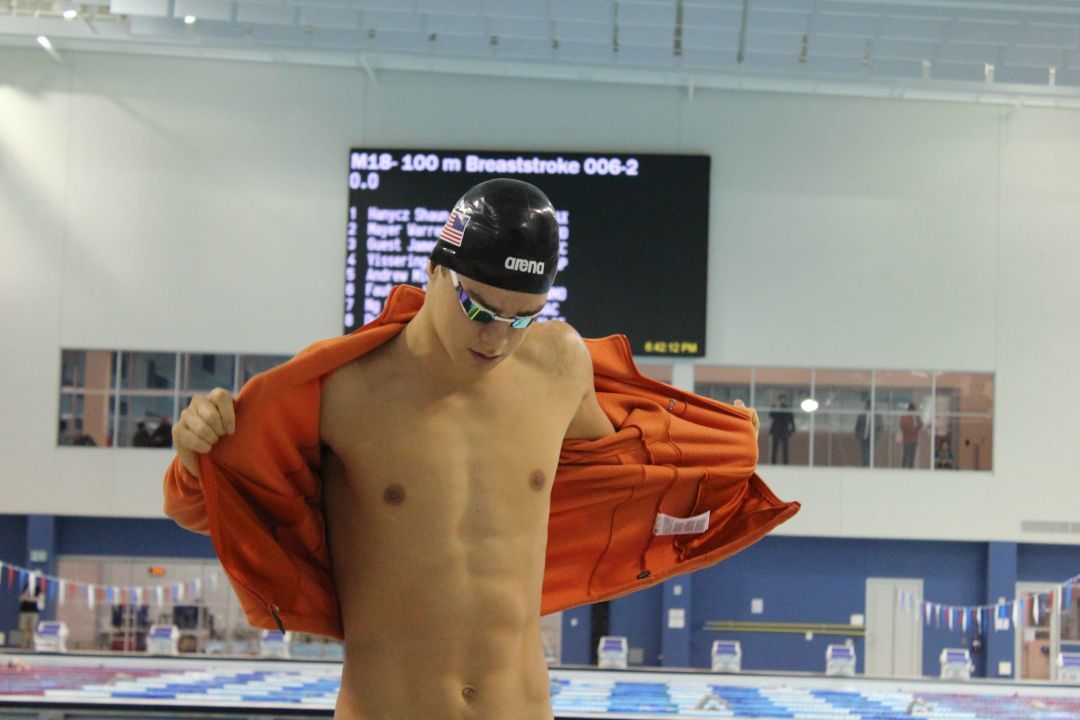 NCAP’s Kylie Jordan took out the first 100 in the 200m butterfly ‘A’ final hard, splitting a 1:01.74 at the halfway point and sporting a body length lead over the rest of the field.

After being the only swimmer under two minutes this morning in the 200m fly it seemed as though Andrew Seliskar was going to steal the show in finals, and that he did.

After breaking an Ontario record this morning, Penny Oleksiak was rearin’ to go after coming within a few hundredths of the Canadian age-group record in the prelims.

It seemed as though she wasn’t the only one gunning for the record as Rebecca Smith of Red Deer threw down a 25.40 to break the previous record of 25.52. Oleksiak was also under the record with a time of 25.51.

With the two swimmers breaking the previous record, 13-year-old Kayla Sanchez wasn’t far off that mark, posting a 25.58 to finish third overall.

Michael Andrew stepped up to swim his first event of the night in the men’s 50m freestyle with top qualifier Cameron Kidd beside him in lane four.

Both were off the blocks like rockets but it was Kidd who emerged as the leader heading into the wall, clocking in a 21.87 to win the event and remain the only swimmer under the 22-second mark.

Another event, another Canadian record for the women. Danielle Hanus was on fire this morning which had eyebrows raised as to whether or not she’d be able to break the Canadian age-group record of 58.47 held by Sinead Russell.

Andrew Seliskar dropped another big swim to go with his 200m butterfly victory from earlier in the evening. Seliskar was a 51.65 for a massive win in the 100m backstroke over Swim Ontario’s Javier Acevedo.

Acevedo was able to break an Ontario age-group record in the 15-17 year-old category with a time of 52.90 to finish second.

Tessa Cieplucha won a tight race in the women’s 400m freestyle final putting up a 4:12.32 to take down her competitors. The Oakville swimmer had competition from NCAP’s Sinead Eksteen who finished less than two seconds behind her in 4:14.12.

Right behind Eksteen was Esraa Abdel-Khalik from Etobicoke who was a 4:14.91 to round out the top three.

Christian Arseneau from MSSAC won the men’s 400m freestyle in a great example of an outside smoke, taking down fastest qualifier Etienne Paquin-Foisy in the process.

University of Manitoba Swim Team’s Kelsey Wog swam a swift 2:25.55 to win the women’s 200m breaststroke final. The sixteen-year-old was just a few second off the current age-group record of 2:22.15.

Coming in second was Genevieve Robertson representing Swim Ontario who posted a 2:27.81 to touch ahead of third place finisher Olivia Paskulin. Paskulin was a 2:28.45 for third.

Seliskar was the talk of the town in Toronto this evening as he came home with his third win of the night, winning the 200m breaststroke final in 2:05.59. With that time he took down fellow teammate Carsten Vissering who finished well behind in 2:10.21.

James Guest was third in 2:11.88 behind the two NCAP swimmers.

Winning the 800 freestyle relay was Etobicoke Swimming. Second was the Oakville Aquatic Club followed by the Swim Ontario team.

In the last event of the evening it was Matthew Mac of the Oakville Aquatic Club who anchored their relay to finish first, putting up a time of 7:28.18. Second was Swim Ontario with Javier Acevedo on the anchor leg, clocking in at 7:32.27.  Point-Claire was third in 7:35.61.

Seliskar time in the 200breast would’ve really close to making the final at the world champs, amazing!!