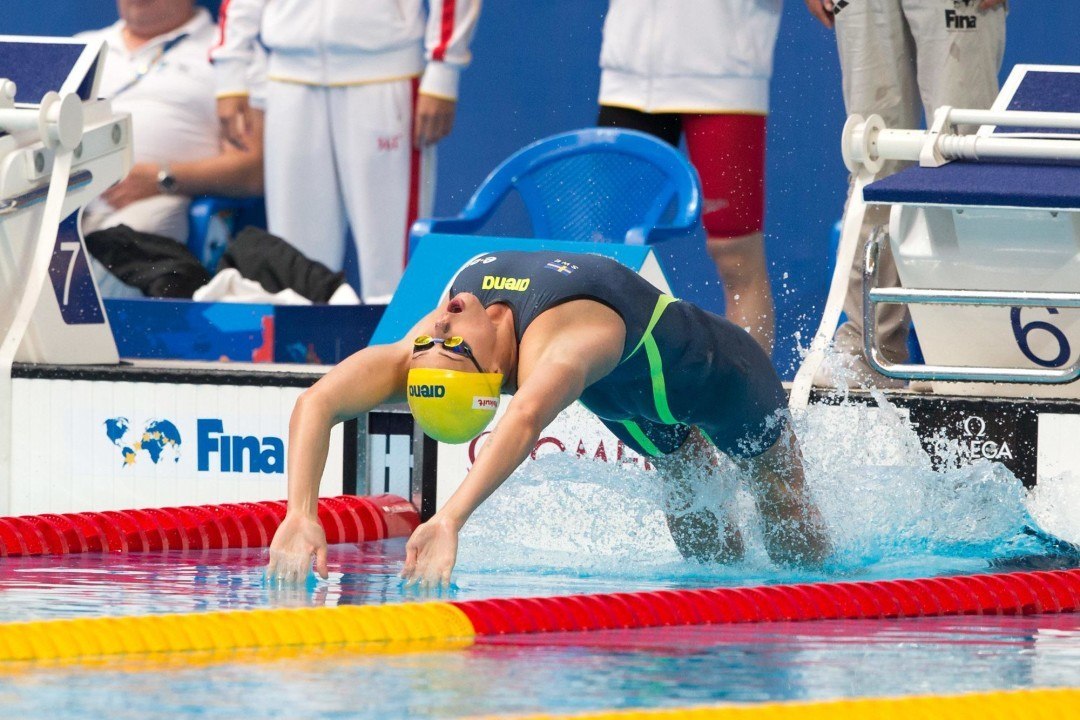 26-year-old Olympian Michelle Coleman was the star of the show on night 3 of the 2019 Swedish Short Course Championships.  Archive photo via Tim Binning/TheSwimPictures.com

26-year-old Olympian Michelle Coleman was the star of the show on night 3 of the 2019 Swedish Short Course Championships.

Coleman has been on fire as of late, dropping personal bests left and right in the 50m free and 100m free long course while competing on the FINA World Cup Series. She even kicked off that circuit beating Aussie dominator Cate Campbell in the 50m free.

Flash forward to tonight in her home nation, and Coleman fired off the 2nd fastest SCM 100 backstroke time of her career. Splitting 28.15/28.83, Coleman produced a gold medal-worthy effort of 56.98, dipping under the 57-second threshold for just the 2nd time ever. She owns the Swedish national record in this event with the 56.57 notched last year.

Although Coleman’s time tonight dips under the 59.05 qualification mark needed for the 2019 European Short Course Championships, Coleman has already announced she will not be competing in Glasgow, instead focusing on her ultimate goal of Tokyo 2020.

Behind Coleman tonight was Hanna Rosvall, who also got under the minute mark to secure silver in 58.07. She easily cleared the QT as well and will add her name to the Swedish roster.

The only other individual SC Euros qualifier on the night came in the form of Johannes Skagius in the men’s 50m breast.

The winner of the 100m distance last night, Skagius clocked a time of 26.50 in this 50m breast sprint to clear the 26.81 time needed for Glasgow, as well as beat the field by over a second. He owns the Swedish standard in the 26.17 he produced at the 2018 Short Course World Championships.

Her 23:59 in the 50 free 20 minutes earlier was fairly decent too….
If Rosvall keeps improving sweden can have decent medley line-up come Tokyo …

Yeah, but would be great to be able to rest Sjostrom in prelims…

Rosvall is a short course specialist, it’s like this every year. She was on a Euro gold medley team in SC already two years ago.

They have a decent medley relay. What they really need badly is a 100/200 freestyler. All they need is one. If that happens, Sjostrom could finally be in the same position as our freestylers have been forever for medal counts. If they can get someone to rise up for the Olympic year, she could potentially take home up to seven medals from Tokyo.