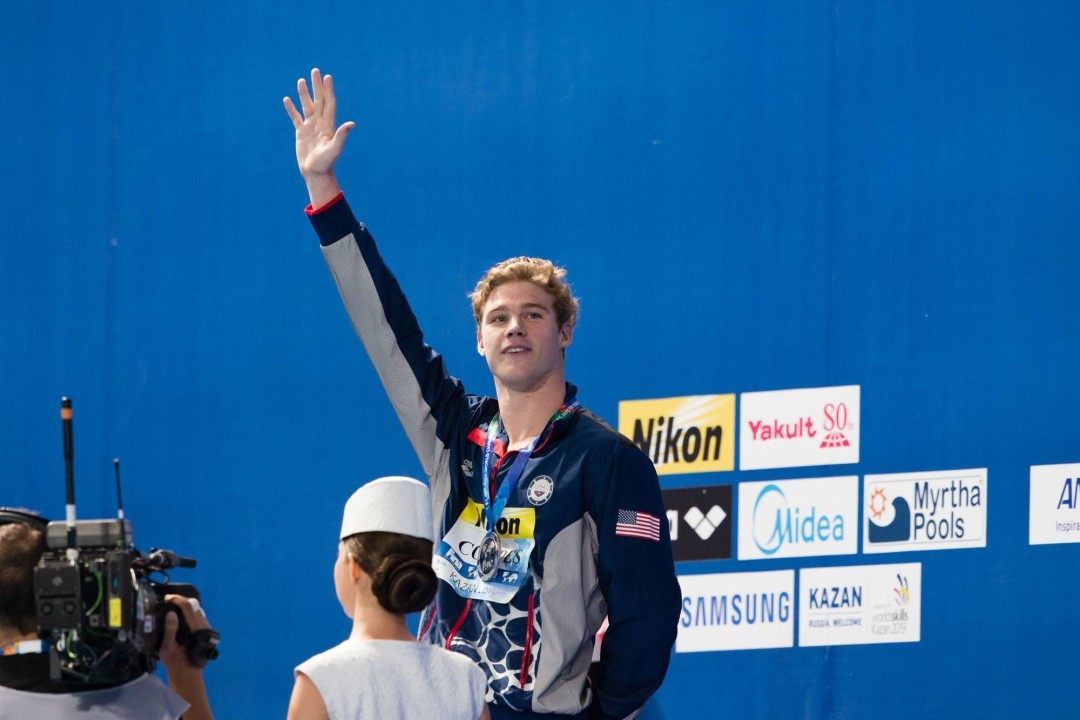 Kevin Cordes is the favorite to win the 200 breast in Omaha (Photo: Tim Binning)

Kevin Cordes has long been America’s next hope for breaststroke greatness since Brendan Hansen’s departure from the sport competitively. The Illinois native and University of Arizona grad has been relatively quiet since winning a silver medal in this event at the 2015 World Championships, and is making his final preparations for this summer under the tutelage of Sergio Lopez in Singapore.

His 2:08.05 from World Champs is the fastest time done by an American from last May to now, though he’s been inconsistent this spring. In January at the Austin stop of the Arena Pro Swim Series, he showcased a promising in-season 2:10.63. At a senior level meet in Singapore though, in March, he produced a lackluster 2:13.45. That being said, he’s only raced at two meets this calendar year, so it’s not quite fair to pass too much judgment on how he’ll do this summer. He also holds a personal best of 2:07.86 from 2014. Having spent the last year with Lopez, it would seem that Cordes is ready for a big summer ahead.

Josh Prenot finished 2nd to a Will Licon record in the 200 breaststroke at NCAAs. (Photo Courtesy: Tim Binning)

After Cordes comes a big pack of swimmers all with Olympic potential. NCAA rivals Josh Prenot and Will Licon will have a little extra heat between them after this collegiate season saw Prenot edge Licon in the 400 IM before Licon got the upper hand in the 200 breast. Short course is short course, and Prenot has proved himself more in the big pool with a 2:08.90 that won him gold at last summer’s World University Games. More recently, Prenot was 2:08.58 at the Canadian Olympic Trials. Licon’s 2:10.02 from last summer is solid, but that time definitely won’t cut it in terms of an Olympic berth. The Longhorn has made big strides in this race in SCY, so one would think that he has potential to be well under 2:10.

Cody Miller and Nic Fink are two post-grads who have been around for several years. Fink comes in with the 2nd fastest time in the last year after his 2:08.89 showing at a France-based FINA World Cup meet in August. Miller, for his part, went 2:09.08 in Moscow just days before Fink. These regulars will be joined by a new face– Andrew Wilson. Wilson, who’s been training at the University of Texas with Coach Eddie Reese after taking a year off from NCAA competition for Emory University, blew up in long course after becoming a Division III sensation in just a few seasons with the Emory program. His best time of 2:09.84 is from 200 breast prelims at U.S. Nationals last summer, where he finished third behind Craig Benson and Licon in finals with a showing of 2:10.35.

Reece Whitley is the top 18& under in this event going into Trials (photo: Mike Lewis)

Looking to join the above six in the final at Omaha is NAG-smasher Reece Whitley. Whitley might be the youngest Olympic contender in the field, but he’s also perhaps the biggest, checking in at 6-foot-8. Age and height aside, Whitley has been 2:11.30, registering that time to win the B final of the 200 breast at U.S. Nationals last summer. Notably, that time tied the great Michael Phelps, who swam the exact same time in the A final to finish 5th. The 15-year-old has improved each season at an impressive rate, and could bring the 15-16 NAG down under 2:10 this summer.

BJ Johnson has been as fast as 2:10.09, done at the 2013 U.S. Nationals, but has only been 2:11.90 in the last year. The 28-year-old might have his days of best times behind him, but a best time might not be necessary to make the final in Omaha. Brendan McHugh and Sam Tierney will both be fighting for a spot in the final, too. McHugh has hit his stride in his post-grad years, and the 26-year-old’s three best times were all done last year. Tierney, a Mizzou grad, swam a 2:12.49 at Winter Nationals this past December to make him competitive for this summer.

Dark Horse: University of Florida commit Chandler Bray swam a 2:14.13 in prelims of the World Junior Championships last summer. He dropped from 54.12 to a national high school record-breaking time of 52.65 in the 100 breast in February, and hasn’t swum a tapered 200 breast, yards or meters, since those World Jr Champs. He’s riding a steady improvement curve and could make some magic happen this summer.

Find links to all of our U.S. Olympic Trials Previews here

Cordes is always a big taper swimmer, and Lopez clearly made an impact last summer after only a short time. After a year? He’ll be great.

These picks are difficult to argue with. The biggest thing I am watching in the event though is Whitley. I think he can go sub 2:10. Although I still think he will have to wait until summer 2018 to make his first senior international team. That’s also exciting because he will have chosen a school by then and I honestly have zero gauge on where he wants to go.

Whitley and Licon I think are capable of going faster than those predicted times.

Certainly for Whitley, his rapid progression makes for a reasonable prediction of something sub-2:10. How far under remains to be seen.

Regarding Licon, his NCAA performance and his coaching by the legendary Eddie Reese surely equate to something spectacular to be seen. With not much LCM performances in recent months to really draw upon, it’s hard to say but I think an estimate around 2:09 is reasonable and anything 2:08s is possible.

Yes the video is on YouTube. Just watched it. I think Licon will surprise everyone–that 2:10 from summer nationals is a poor indicator (Licon was still recovering from Mono). Amazingly, I think the top 2 could be Licon & Miller rather than Cordes & Prenot! Of course Miller needs to keep his kicks under control & not dq. This could be quite a show at OT’s. There could even be 4 swimmers sub 2:08, & 8 swimmers under 2:09. Wilson will probably drop a chunk after working out with Licon for a year, and Whitley might just be ready for the big time. Can’t wait to see it!

Licon just swam 2:13, swimming alone (with 14 year olds) at a Longhorn LC meet in Austin, in the middle of heavy training. Do not discount he beat already Cordes and Prenot in NCAAs and that counts psychologically too. Licon swims under 2:08.00 and qualifies for Rio.

I predict Cordes in 2:06.9 in WR, Prenot very close behing also under the WR. Hate me for predicting this, but I think it can happen!

No, Cordes will probably break the 2-minute barrier at trials.

I either hope that was you mocking the Penguin, Mssr. Gigi, or you meant to say the 2:07 barrier

I concur. 2:05.9 is not out of the question with how much the stroke has evolved. No other event are there half a dozen swimmers within 1 second of the WR in a 200.

Rio dude. It’s not 2008, WR aren’t going to be falling left and right at trials. That being said, I think that time is very realistic on a full taper with olympic final adrealine

hahahaha 2:06.9 for cordes, very funny. Multiple dolphin kicks may achieve that but it will still be hard even with multiple dolphin kicks. I don’t think anybody will break the world record even in Rio because I,m not one of those who think swimmers are machines who will keep breaking world records indefinitely. At some point world records will stop being broken and may become a once in a century event. Take a look at track and field. world records in track and field are as rare as a solar eclipse. Maybe even rarer and swimming may well have gotten to that point or if not they will get to that point soon. Very soon.

I can have my opinion, you can have yours.

Swimming is different than track in the sense that we operate in a medium we weren’t built for. We will constantly be changing technique to make swimming faster and faster. Eventually we will reach a point where it will be harder to break a world record than it currently is, but I don’t think it will ever get as hard as it is in track

Not even close to the end of time improvements in swimming. take a look at men’s ncaa champs this year, an event that has gone on for almost a century in a country that has been the world leader for much of that time. Yes, it is not long course but speed through water is speed through water and it will eventually translate. Also consider the improvement of swimmers from none traditional swimming nations over the last 20 years, that is not going to stop.

Not sure where you’re getting this multiple dolphin kick stuff from, I haven’t seen Cordes doing anything but a very lean and straight streamline from dives and walls. He has always had the potential to be a great long course swimmer with his stroke, nerves have merely gotten the best of him in recent years and a lack of international experience. For sure Sergio has been working this out with him, both by being his coach and by coaching him abroad in Singapore (which brings about fresh experiences and an excitement). 2:06 is definitely feasible for him.

Wait what? Like the rate of world records might decrease eventually but how can someone breaking this record be laughable? I can think of like ten dudes who are within striking distance. That kid Yamaguchi might pop off again who knows. The Phelps effect has brought so much more talent and athleticism into this sport and taught us what to maximize. We’re getting kids like Cordes who are 6’6 and athletic or Dressell who can jump through the roof. This record especially though has a long way to go, wouldn’t even be shocked if peaty broke it!

I would….peaty wouldnt give up his speed for the endurance

it doesn’t exactly work like that but okay lol

I know that. That,s why I stated my opinion.

Not sure the WR in the 200 breast will be broken but if it is broken, it will probably be someone with consistent 2:07 swims. The only one right now is Marco Koch. Gyurta is the second most consistent 2:07 swimmer so I say the WR will be between those two. That is if the WR is even breakable at this point.

Or, by someone who’s already at 2:07+ but young enough to keep getting improved. Like, maybe, Cordes for example?

the fact that there have already been so many men at 2:07 means its going to be smashed. that cant be said for most other events

That’s exactly right, this seems like a very vulnerable record considering how many people are knocking on the door.

I think the order will be largely the same, but I predict a few guys get into the 2:07 range. Licon and Prenot will have to battle it out for that second spot.

With that being said, Cordes is unpredictable. It could go smoothly and he grabs the 100 and 200 spots, or it could be a rough showing and he leaves disappointed. I’m hoping he’s on point though.