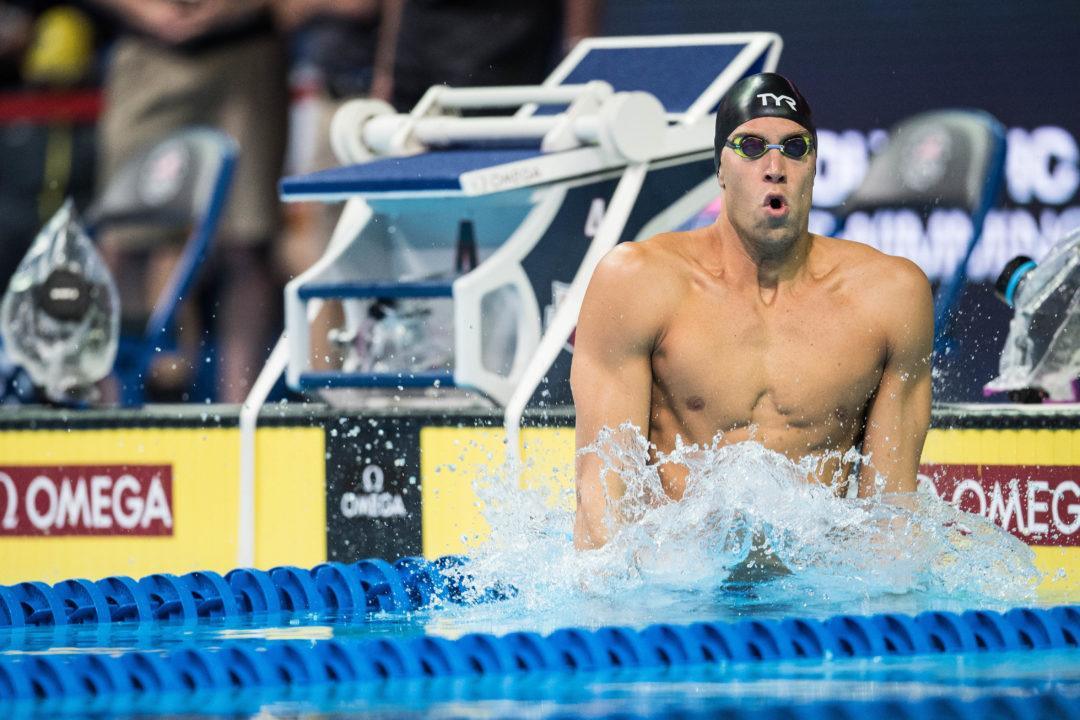 2008 and 2012 USA Olympian Matt Grevers will be back in action this week at the Austin Pro Swimming Series, six months after just missing the 2016 USA Olympic Team.  Grevers will be swimming the 50 free on Saturday and his signature event, the 100 back, on Sunday.

Going into Trials last June, we expected that it would be a tough three-way fight for the two spots in the 100 back, with Grevers facing Ryan Murphy and David Plummer.  Someone was going to be left out, and it was Grevers, who seemed to be contemplating his future in the sport in the days after, but eventually clarified that he was not retiring.

His post-Trials debut this week will come shortly after Plummer officially announced his retirement, which should help open up Grevers’ path to making the World Championships team this summer.  He’ll still have to contend with the new world record holder, Murphy, along with a slew of younger backstrokers, like Jacob Pebley, who will also be competing in Austin this week.  While it’s first meet in a while, Grevers had looked to be in great shape leading up to Rio — he broke the 100 back SCM world record at the Duel in the Pool in late 2015 — and at the age of 31, he’s still an elite swimmer.

Hali Flickinger is the other Olympian on the Austin psych sheets who we haven’t seen at a meet since Rio.  This will be her first year full swimming since her NCAA eligibity expired, after helping guide the Georgia Bulldogs to a victory as a senior at last year’s NCAA championships.  She’s entered in seven events total, including the 200 fly, where she’s the top seed after finishing 7th in that event in Rio.

There will be plenty of other Olympians making their long course debut this week, although we’ve seen them swimming major meets in either short course yards or short course meters formats in the past few months.

Ryan Held and Beryl Gastaldello are both still swimming NCAA, and have represented their schools in dual meets and their respective fall/winter invite meets.  Most of the rest of the Rio Olympians who we’ll see this week competed at short course world championships in December, including (but not limited to) Simonas Bilis, Penny Olesksiak, Josh Prenot, Taylor Ruck, Daiya Seto, and Amanda Weir.

Lot of entries and also a strong international field. Interesting that a meet in January in the USA can have such a deep entry list while the FINA world cups almost get no swimmers.

I am so glad that Grevers is in the pool. As well as his continued elite swimming capacity, in my opinion he is already an excellent role model for the younger competitors and has everything it takes to be a team captain candidate this year if punches his ticket for Worlds.

He’s also a great role model for older competitors. There was nothing cooler than when he showed up at Master’s Nationals a few years back, swam a bunch of races, and hung out on deck having people swarm him for photos. Class act.

That was very cool. He signed a poster for my daughter and she was over the moon.

Definitely thought he’d retired. (I feel like I remember him swimming the 200 back, scratching the 50 free and saying he was done at Trials?)

I think he implied he was done, but never actually stated it directly. Either way, I agree, great to see he’s going to continue at least for a little bit. He’s a great guy. A gentle giant 🙂