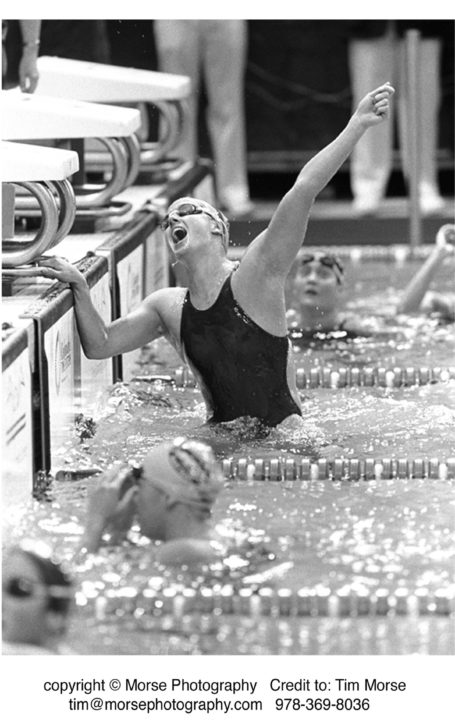 Olympian Katrina Radke is a part of the cast for long-running reality TV show Survivor's 35th season, which premieres this fall.

Olympian Katrina Radke is a part of the cast for long-running reality TV show Survivor‘s 35th season, which premieres this fall. That’s per Entertainment Weekly, which announced the full cast this afternoon.

The 35th season is titled “Survivor: Heroes vs Healers vs Hustlers,” with three tribes divided based on their positive character traits. Per the season’s first preview, members of the “Heroes” tribe are “heralded for their courage, their achievements, and ideals for which they stand.”

Radke (now Katrina Radke Gerry by marriage) was an American Olympian in 1988, finishing fifth in the 200 fly in Seoul, South Korea. She was also a two-time gold medalist at the Pan Pacific Championships in 1985 and 1987. Radke is now a sports psychologist and therapist, running a coaching/counselling business with her husband.

Radke will be joined on the Heroes tribe by a former NFL football player, an ex-Marine, a firefighter, a lifeguard captain and an actuary.

The Heroes will square off with the Healers (featuring a surgeon, a nurse practitioner and a therapist) and the Hustlers (made up of a Hollywood personal assistant, a bellhop and an owner of a self-started moving business, among others). The season premieres on Wednesday, September 27 at 8 PM Eastern.

You can check out her cast introduction video below:

My money is on Trina

Maybe they can cut the nonsense with the carnival games and eating 10 bugs challenges and do a 200 fly instead.
Trina to PLEASE make a solid Final 3 pact/alliance with the ex-Marine and the heroic actuary. <3
P.S. Does "Hustlers" = social mediawhores? Trina to vanquish this entire tribe immediately. KTHX

They’re defining “hustlers” as people who hustle in their job, like bellhops and such. The definitions of each tribe are vague because they come up with the theme for the season usually after they cast the people.

Radke’s husband, Ross Gerry, was one of my all-time favorite Masters swimming coaches. I’m sure he will share some of his Zen Master/Jedi-Knight mind tricks with her so she can outwit the “Hustlers” and the “Healers.”

Was he her coach?

Top of the Day GA