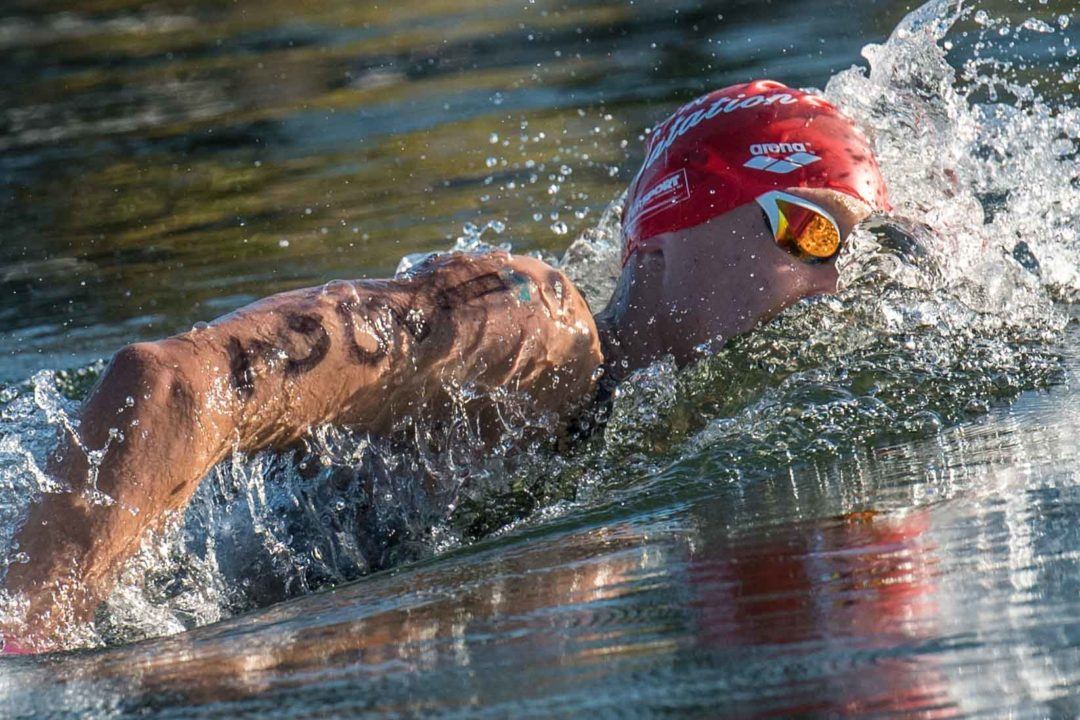 France's Marc-Antoine Olivier won the first gold medal of the 2017 FINA World Championships with a win in the men's 5k.

After preliminary diving and synchro action kicked off the 2017 FINA World Championships on Friday, the first medals were on the line Saturday as the men’s 5k Open Water event took place.

In what sometimes becomes a wild sprint finish from a large pack of swimmers, especially in this the shorter 5k distance, the sprint for gold came down between two men.

France’s Marc-Antoine Olivier and Italy’s Mario Sanzullo had broken from the pack, and were alone as they sprinted for gold. Olivier got there first, registering a time of 54:31.40 to win the first gold medal of these World Championships. Olivier was the bronze medalist last summer in the Olympic 10k. Sanzullo was half a second behind for silver in 54:32.10.

Great Britain’s Timothy Shuttleworth managed to break free of a large group at the end of the race to snag bronze, ten seconds back in 54:42.10. Shuttleworth holds long course personal bests of 3:48.06, 7:50.52, and 14:55.68 in the distance freestyle events in the pool, so it’s no surprise he had some speed to close the race.

Russian Kirill Abrosimov toook 4th, Brazilian Fernando Ponte was 5th, and Andrea Manzi made it two Italians in the top 6.

Sanzullo and American David Heron were the only two two who finished in the top 10 in Kazan who managed to do it again in Budapest. Sanzullo moved up from 8th to his silver, while Heron was 10th after finishing 6th in Kazan.

The women’s 10k will take place tomorrow at 10 AM local time.

Repeat for Aurelie Mueller. Very happy for her after the Rio robbery

I find it amazing how these 90 or 120 or 300 minute races somehow come down to tenths, or sometimees even hundreths of seconds. It shows how tatical these race are.

I don’t know the OW rules how they differentiate between two places when the times are the same. E.g. 6th and 7th places. Hundreds, in this case why not written? Photo finish? Somebody could help.

Of all the medal winners, the Frenchman had the balls, well deserved gold and a real threat over 10k too. Props to Shuttleworth after a disappointing trials 1500m.

Aurélie Muller world gold 2 years ago
Marc-Antoine Olivier today
Sharon Van Rouwendaal olympic champion last year
I don’t even talk about Laure Manaudou.
And some people still dare to criticize my methods? 😆
https://www.youtube.com/watch?v=hOc3O7em_2o
Even Amaury “hamburger” Leveaux has thanked me after London. And yet, he hated me more than once in training…. 😆
https://www.youtube.com/watch?v=u7JSTIADxnc

This is either a huge revelation or the greatest troll of all time.

Literally, I was going to ask earlier, after the “my swimmer” comment… Brain = Fried

Think it’s an elaborate troll though… I remember commenting on Leveaux once and Bobo saying he didn’t know he had such a fast 1500m lol… Or he may be a master of irony ??

There is one minor flaw in you posing as Phillipe Lucas. He doesn’t speak english.