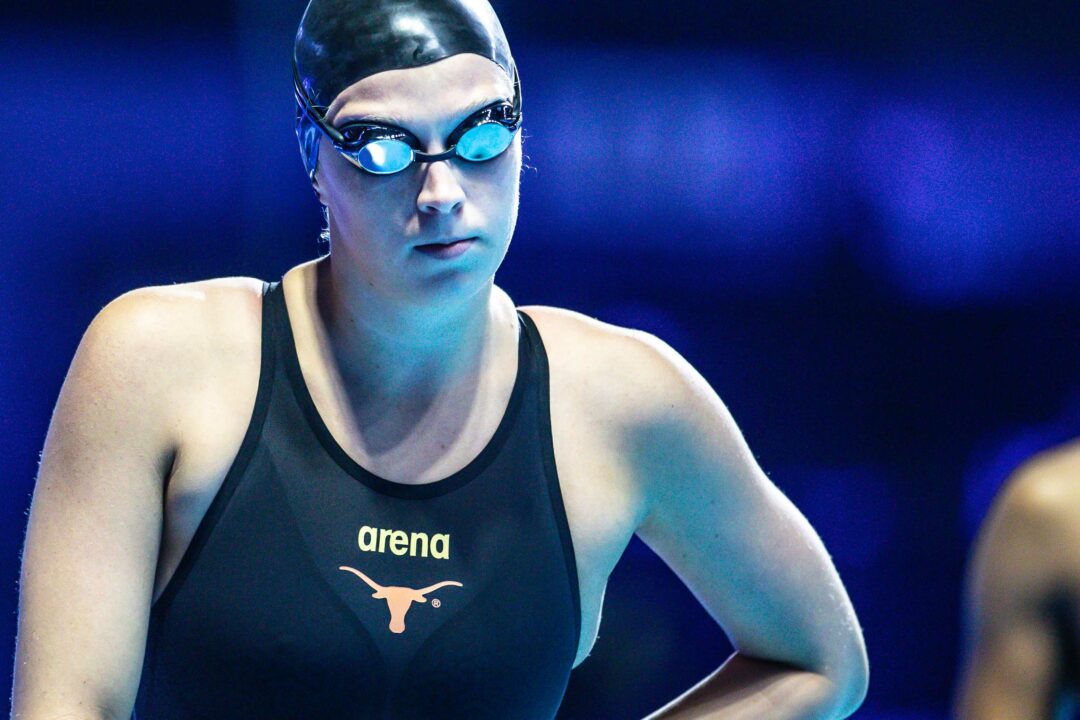 Olivia Bray of Texas won two individual events (100 butterfly, 500 freestyle) and was part of the winning 200 medley relay as the Longhorns beat the Tar Heels in North Carolina.

On Friday, UNC beat Duke 154-146, where they posted several seasons and lifetime bests. The Tar Heels changed their lineup almost entirely from the Duke meet, and Saturday marked their senior day festivities.

In spite of losing the meet, UNC continued their fast swimming with more season-best times.

In the 100 breaststroke, Texas’s Eledt won in 58.08, which set a pool record. The previous record was 59.28 by Andrea Podmanikova of NC State.

For the German sophomore Elendt, this year has been an overall breakout season. On Friday, against NC State, she swept the breaststroke in 59.25/2:08.13. On Saturday, where there was no 200 breast on the race schedule, she managed to find more than a second off that 100 breast time.

She has been better at every turn this season than last season. Her 58.08 from Saturday almost matched her personal best of 58.06, from Texas’ Covid-season opening meet against TCU last year, and was 8-tenths of a second faster than she was at NCAAs last year.

Elendt was one of two Pool Records set at the meet, with the other being set by her teammate Olivia Bray.

In the 100 butterfly, Bray broke the pool record in a winning time of 51.33 seconds. The previous record was owned by Kylee Alons of NC State (51.52). That swim is already faster than Bray was at last year’s NCAA Championship meet, though still well short of her lifetime best of 50.19 from high school.

Elendt and Bray also broke pool records nearby at NC State on Friday.

Grace Countie was the Tar Heels’ sole individual winner of the day. In the 50 freestyle, she touched first in 22.10 seconds, which is a season-best result from her and about matches her swim from ACCs last year. She swam 22.29 at UNC’s mid-season invitational this year, and her lifetime best from 2021 NCAAs is 21.81.

Sticklen is primarily a butterflier, but with a deep Texas fly group, she didn’t swim any butterfly races at this meet. Instead, individually she swam that 100 back and the 200 free, which she won in 1:47.82. VanNote was 2nd in 1:48.19, which is a new personal best time.

Olivia McMurray is a huge name (8:35.3 in the 800 FR). World JR’s top 8 finisher, 2x member of JR team, and potential NCAA scorer in the mile coming out of high school. She will defiantly have a huge conference season if she’s going 4:47/9:51 in a dual meet!

There’s no problem if she is. It’s not the same thread. And more importantly she’s saying positive things about other swimmers which can’t be a bad thing!