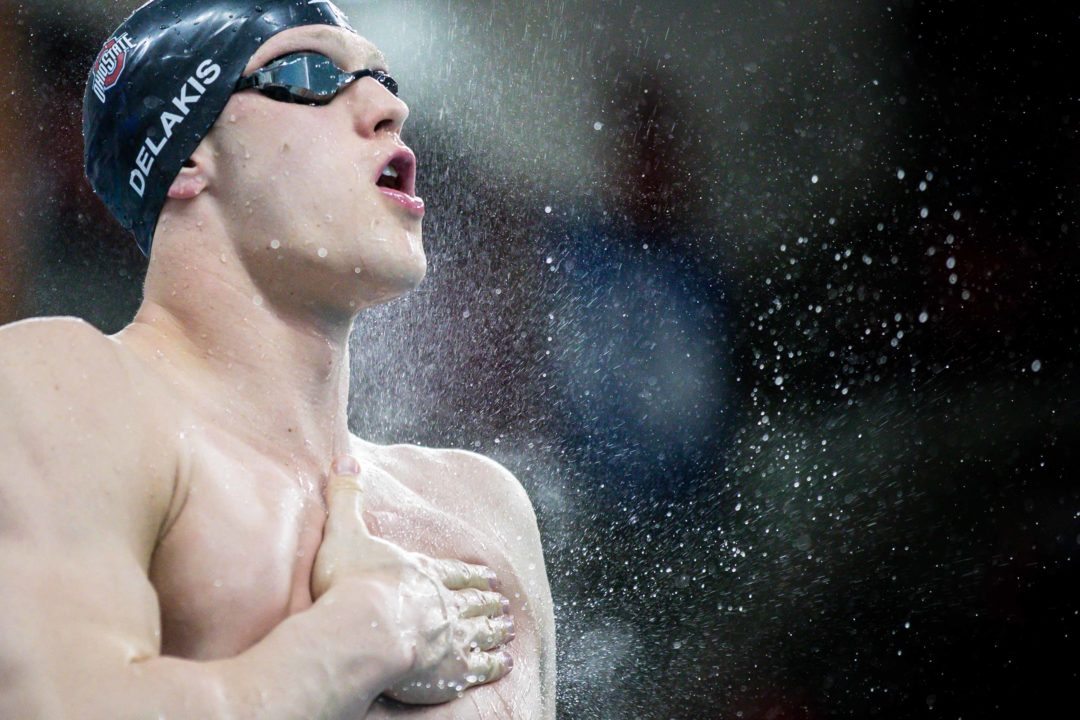 Penn State’s men and women (and one diver from Rutgers) came to Columbus this weekend, making for a very competitive meet against Ohio State. The men’s meet was close, and the women’s meet came right down to the final relay.

Rutgers was initially going to have their season debut here with swimmers and divers, but a week ago, news surfaced that their roster was ‘fluid’ and they’d be redshirting most of their roster this season. Per head coach Jon Maccoll last week, only three swimmers and three divers are physically on campus as COVID-19 has complicated their season plans.

The women’s meet was quite close, with things coming down to the wire in the final stretch of events.

Another strong event for the Buckeyes was the 100 free, where seniors Taylor Petrak and Freya Rayner went 1-2 in 50.74 and 50.78, respectively, followed by sophomore teammate Amy Fulmer in third (51.19). The other winner for OSU yesterday was Josie Panitz, who clocked a 2:14.95 to secure the 200 breast.

Marie Schobel led the Nittany Lion charge, as she swept the backstroke events. She was part of a massive initial effort for PSU, who won every event in the first half of the meet except for the 1000 free. The junior was 53.83 in the 100 back, winning by over a full second, and then 1:57.35 in the 200 back to lead a PSU 1-2 with senior teammate Stephanie Szekely (1:57.96).

With two events left, Margaret Markvardt picked up a crucial win for Penn State in the 200 IM, going 2:01.87 to easily handle OSU’s Kristen Romano (2:03.47). That brought Penn State within striking distance again (seven points) after getting decimated on the 1-meter, forcing it all come down to the 400 free relay.

Sophomore sprinter Abbie Amdor was a notable absence for the PSU women.

Ohio State had key showings from freshman distance specialist Charlie Clark and a deep diving group as they kept an upstart Penn State crew at bay.

Winning big in the 200 free was senior standout Paul Delakis, the favorite for the 2021 conference crown in the same event after finishing second last season and having the top returning time in the Big Ten. Delakis was 1:37.68, claiming the win by almost three seconds.

The other big winner for OSU was Jason Mathews, who took the 100 breast by over a full second with a 53.41, while WVU transfer Hunter Armstrong tied for the 100 free win (44.62) with PSU’s Will Roberson. Meanwhile, on the boards, Joseph Canova won both diving events as the Buckeyes took the top four spots in both.

Penn State had a fantastic meet, though, keeping things close with the Buckeyes. Before Roberson’s tie in the 100, he led a 1-2 finish in the 50 free, clocking a 19.85 as freshman Jake Houck was second in 19.92.

Michael Daly swept the backstrokes for PSU, posting a 47.24 in the 100 back and 1:44.04 in the 200 back. His 47.24 in the 100 back was a lifetime best by over a second; he typically focuses on the 200 back and distance events. Another win for the Nittany Lions went to sophomore Daniel Raisanen, who was the breast leg on their winning medley relay. Raisanen, a Swedish national, clocked a 1:58.89 in the 200 breast to upset Mathews by a few tenths after Mathews won easily in the 100 breast.

Notable absences for the Buckeyes included sophomore backstroker Jonah Cooper and redshirt sophomore sprinter Ruslan Gaziev. Gaziev was supposed to be back with the team this season after an Olympic redshirt year last season. Star sprinter Gabe Castano was also out for the Nittany Lions.

Sad when a team feels the need to suit up to feel like they can compete. Save it for champs?

Sad when you win a meet and STILL come on the internet to complain.

I can’t think of a Big Ten meet in the last 5 years where Ohio State hasn’t had some complaining about suits.

If I were a recruit, I wouldn’t be interested in surrounding myself with this kind of negativity.

I’m in no way associated with Ohio St. I actually have more issues with Penn States rep

It was discussed before the meet that both teams would suit up. Last minute change clearly.

Normally, I would agree but considering the fact that the Big 10 wasn’t able to compete until this month, I would give them a pass. There aren’t many chances to be suited this season.

How much does suiting up really help if they are old suits and no rest or shave? A little, probably, enough to have made the difference in 1-2 races… maybe. Honestly, in this meet, diving likely made a bigger difference in the outcome of the meet.

Maybe just be happy these athletes are getting a chance to compete at all. They have all made huge sacrifices to meet COVID requirements to get to compete. At this point with so many programs at risk of being cut, I was just happy to get to watch some B1G swimming and some great racing.

nonono. You missed the narrative. We’re NOT supposed to be happy that everyone’s swimming, because not everyone CAN swim.

It’s like lent. Thou shalt abstain from tech suits so that you too may know the suffering of jesus teams on the west coast.

Penn state wore tech suits while Ohio state did not

I anticipate the weight room making a profound impact for him.