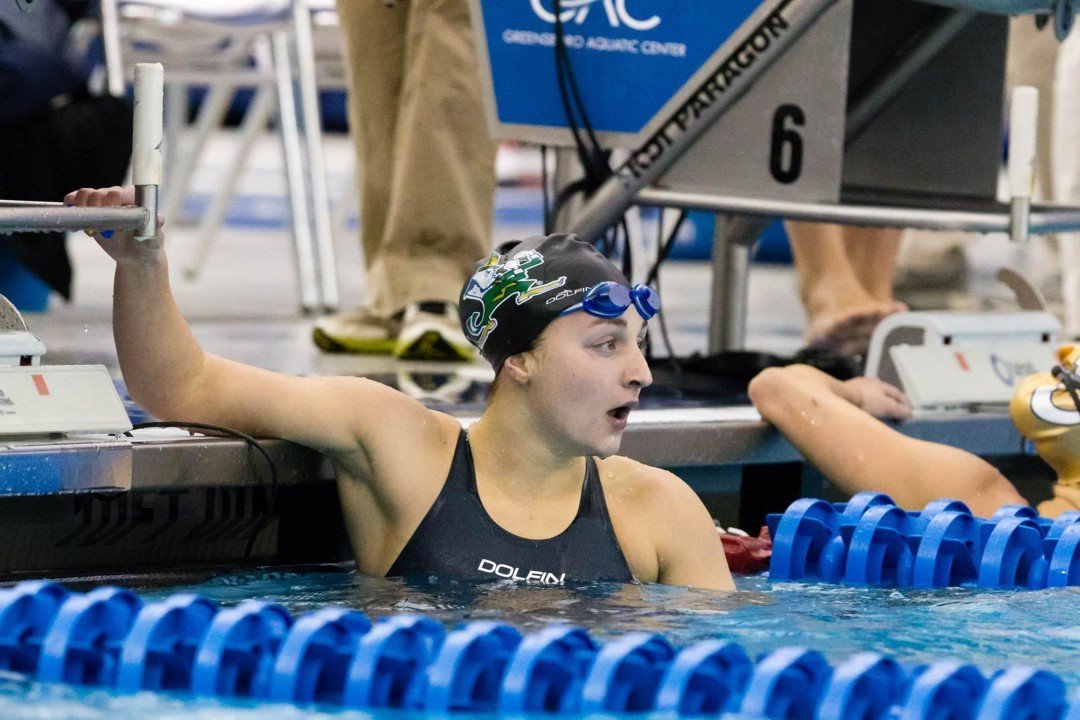 TALLAHASSEE, Fla. – Complete team competition and effort allowed the University of Notre Dame men’s and women’s swimming and diving teams to take a day one lead at Florida State. More of the same followed for the No. 22 Irish on Saturday, as Notre Dame claimed a crucial Atlantic Coast Conference (ACC) sweep over the No. 20/25 Seminoles by way of a 191-162 men’s score and a 193-160 decision on the women’s side at the Morcom Aquatics Center.

The Irish men’s squad (7-2) rode six race victories and a pair of NCAA B-cut times to pull away from the 20th-ranked Seminoles on Saturday. Senior Rob Whitacre was a triple-winner for Notre Dame on the day, taking the 200 backstroke and 200 IM titles along with swimming in the triumphant 400 medley relay. Junior Tabahn Afrik added wins in the 100 free and with the 400 medley relay, while freshman Zach Yeadon swept the meet’s distance events with an NCAA B-cut win in the 500 freestyle. Senior Joe Coumos completed the weekend diving double with a win off the 1-meter board.

The Notre Dame women’s team (9-1) was vaulted ahead by three event wins and a number of point-earning swims to defend its sizeable lead from day one. Both junior Alice Treuth (200 backstroke) and sophomore Abbie Dolan (100 freestyle) posted Saturday victories for the Irish, while freshman Lindsay Stone put on another stellar performance in a 500 freestyle win.

“A great win by both of our teams this weekend. Our women continued to perform as a focused group and got off to a great start by taking the 500 freestyle, 100 freestyle and 200 backstroke. Florida State made a great charge in the last few events but we had gotten our work done. I am very proud of this team, and am very excited to see what they can do in the championship month of February.”

“Leading by only eight points after yesterday, our men put the meet to rest by winning an all-important 400 medley relay. That event was key as FSU truly has some strong relays, and the points swing spurred a 1-2-3 finish in the 500 freestyle. Tabahn Afrik came from behind to win the 100 free, and Rob Whitacre continued a great senior year with wins in both the 200 backstroke and 200 IM, pulling off a triple. Joe Coumos added a diving sweep, and we reached our goal of 177 points before the last event. It was a fantastic effort by our guys as we look ahead to February.”

Men’s 400 Medley Relay – The Notre Dame contingent of Rob Whitacre, Steven Shek, Justin Plaschka and Tabahn Afrik raced to victory with a time of 3:14.30. The Irish entry of Jack Montesi, Garrett Clarke, Matt Grauslys and Daniel Speers finished fourth with a time of 3:21.20.

Women’s 500 Freestyle – Lindsay Stone swept the weekend distance slate with a winning time of 4:50.98 to take the victory by more than five seconds. Teammate Molly Treble was runner-up with a time of 4:56.03. Reilly Lanigan placed fourth with a time of 5:02.08.

Men’s 500 Freestyle – Zach Yeadon led a dominant Notre Dame effort in the distance that saw a podium sweep for the Irish. Yeadon’s winning time of 4:21.62 was well under an NCAA B-cut. Sadler McKeen took second place with a time of 4:29.51, while Richard Mannix was third in 4:30.00.

Women’s 100 Freestyle – Abbie Dolan picked the win by touching the wall in 49.91 for the race triumph and an NCAA B-cut. Skylar Fore was runner-up in 50.47, and Lauren Heller placed fourth with a time of 51.25.

Women’s 200 Backstroke – Alice Treuth completed the backstroke sweep for the meet, scoring a win with a time of 1:56.28 for an NCAA B-cut. Kyra Sarazen was runner-up with a time of 1:59.92, while Carly Quast placed fifth after touching in at 2:03.14.

Women’s 200 Breaststroke – Meaghan O’Donnell was the top Notre Dame finisher, placing second with a time of 2:17.26. Sherri McInteefinished fourth in 2:18.04.

Men’s 100 Butterfly – Justin Plaschka paced all Notre Dame competitors with a second-place time of 48.33 to just miss an NCAA B-cut. Matt Grauslys finished fourth with a time of 49.06.

Men’s 1-Meter Diving – Joe Coumos capped a weekend sweep with a winning score of 327.53 points off the 1-meter board. David Waszak was fourth with 286.95 points and Peter Myers fifth with 266.02 points.

TALLAHASSEE, Fla. – The nationally ranked Florida State swimming and diving teams suffered a close loss to No. 22/22 Notre Dame in a 19-event two-day dual that came to a close on Saturday at the Morcom Aquatics Center.

“I thought we stayed tough with how we competed,” FSU head coach Neal Studd said. “We did have some great performances for this time of year and I’m very encouraged on our progress as we head towards championship season. Hats off to Notre Dame. They are a very good team.”

The women were victorious in six of the nine events on Saturday, including five straight to finish the meet.

Florida State opened the session with a victory in the 400 medley relay, clocking a 3:40.52 behind freshman Madeline Cohen along with seniors Natalie Pierce, Tayla Lovemore and Alexi Smith.

After Notre Dame claimed first and second in both the 500 free and 200 back, Pierce stepped up and won the 200 breast by almost three seconds, touching with a time of 2:14.62 while junior Natalie Purnell finished third (2:17.80).

Lovemore followed with a victory in the 100 fly with a time of 54.60, leading from start to finish.

The Seminoles claimed first and second for the second straight day in diving, as sophomore Ayla Bonniwell won 3-meter with a score of 306.00 ahead of senior Blaire Mulka who tallied 298.43.

Smith ended the meet on a high note with a 22.56 anchor leg to lift the team of Lovemore, freshman Emma Terebo and junior Leila Johnston to a comeback win in the 200 free relay with a time of 1:32.47.

In the opening 400 medley relay, the team of seniors Connor Kalisz and Matt Ankerholz along with juniors Kanoa Kaleoaloha finished second with a time of 3:14.52.

Ankerholz held off the Irish for the second time this weekend, securing the 200 breast win with a time of 2:01.32 while freshman Julia Horrego grabbed third (2:02.95).

Kaleoaloha gave the Noles back-to-back wins after a dominating win in the 100 fly, clocking a 47.62.

Florida State showed its sprinting depth by finishing first and second in the 200 free relay. Senior Chad Mylin led off the top team with a split of 19.81 before handing the near one-second lead to Plechy, junior Emir Muratovic and Kaleoaloha for a final time of 1:19.76.

The Noles had a strong back half of the relay from the ‘B’ team as freshman Oszkar Lavotha, Ribeiro de Souza, sophomore Vladimir Stefanik and junior John Vann held off Notre Dame’s top team for second, clocking 1:21.97.

Florida State will compete in its final dual meet of the season on Jan. 27 at the Morcom Aquatics Center at 11 a.m. against Florida Atlantic.