Notes and Quotes From Day 4 at the 2015 SEC Championships 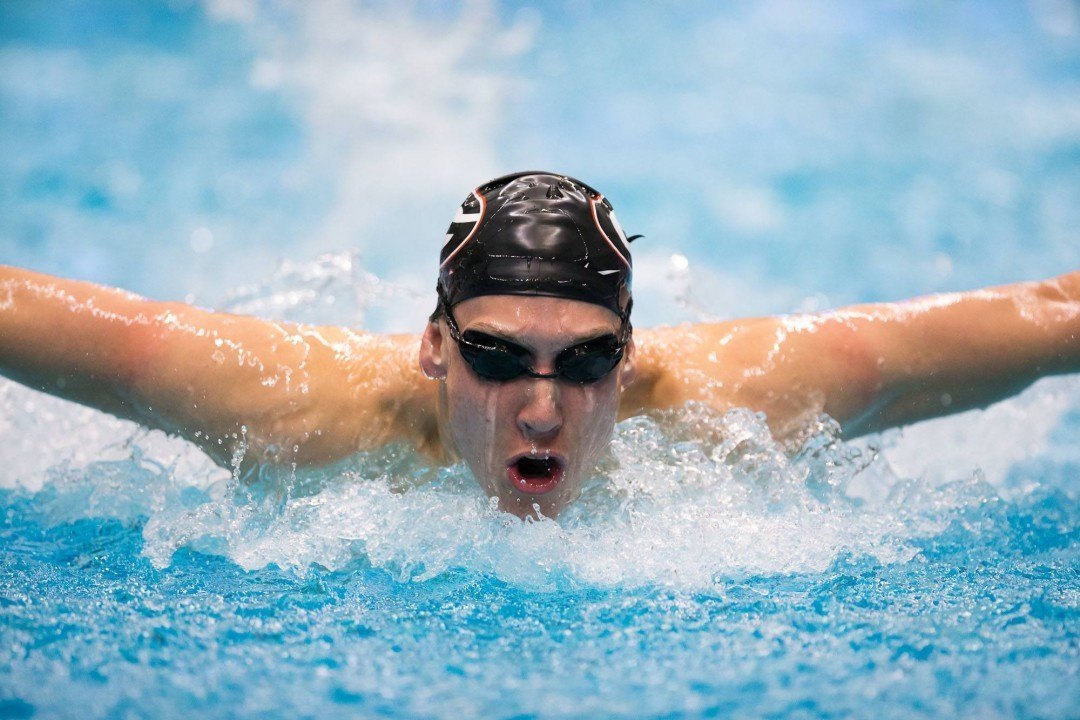 See what event winners and coaches had to say about Friday at the SEC Championships, plus notes about school records and other top accomplishments for each school, including Chase Kalisz (above). Archive photo via Tim Binning/TheSwimPictures.com

“I’m really happy with the win. My goal for this meet is to get as many points for my team as I can. I just swam my own race. I stayed back and stayed patient and utilized my strengths.”

“I feel like I’m on a high right now, I’m so excited and proud to be a Wildcat and represent my team. My approach tonight was whatever it takes to win. I knew this morning in the prelims I went out a little bit too fast, so I wanted to back off a little bit in the finals. When I noticed I started to catch up in the last 150 meters, my mentality was to keep kicking out of that last turn and I can win. I feel so lucky and honored to be on this team.”

“It’s surreal. I never really expected to do that. My goal at the beginning of the season was just to get on the podium or get top-8 again. This morning I just had a break out swim and I was very surprised, but now I know all the hard work and training is paying off.”

“(Runner-up Kylie Stewart and I) have been training all season and racing each other, so it was so nice to have her next to me. She pushes me to be better. It was awesome to have so much Georgia representation in the backstroke.”

“I’m certainly proud to have won this event four times. This one is a tribute to the whole year. It’s not just something that happened here. It goes back to the training, the hard work and my teammates pushing me all year. They have made me a better swimmer.”

“I talked a little bit this year about having fun this year, and I don’t know what is more fun than winning in my senior year. It still hasn’t really hit me yet.”

“This is what we’ve been training for all season and I’m just really happy that the hard work we put in all season has paid off. I’m also very glad to have done it with my teammates. Having three of us in the final is really rewarding. It shows that LSU showed up and we are going to fight until the end.”

“It is a tough double. I had to do the 100 back again and I went the same exact time.  Even though I’m hurting I had to get pumped up for the relay. It was awesome. SEC record; I don’t think any of us expected that. Once again shout out to a great coaching staff, great teammates, and great support from our families. It has been a surreal experience here. These SEC’s have been great.  We still have one more day, so I’m excited.”

“It’s great to see some of our freshmen stepping up, people stepping into these relays who wouldn’t usually be on them. Both in my (100 breaststroke) race and on the relay, I was hoping to be a little bit faster. But based on where I am in my training and with the season, I was very pleased with it.”

“Our ladies stood up again today with a great morning and a great evening. We were able to stretch out our lead today. If we have a good morning (Saturday), we’ve got a good shot at another championship.”

“Georgia had a real big day, but we’ve got to come in and swim well again tomorrow. It is what it is. If we come in and race and take care of business then we will be fine.”

— Alabama is up to five SEC titles – three individual and two relays – already this week with one day of competition remaining. Kristian Gkolomeev won the 50 freestyle while he, sophomore Alex Gray, freshman Luke Kaliszak and junior Brett Walsh won the 200 freestyle relay on the meet’s second day.

— Kaylin Burchell won the 100 breaststroke in a time of 58.87. She was the only woman under 59 seconds in the meet. It was the Tide women’s first individual SEC title since 2009 when Alabama won a pair of diving championships. It was Alabama’s first 100 breaststroke title since Olympic bronze medalist Anne Poleska won in 2002. Burchell swam a 58.48 in prelims, lowering her own school record.

— Connor Oslin won the 100 backstroke with a school record 45.45, a time he matched leading off the Tide’s championship relay. He was the only swimmer under 46 seconds in finals, bettering the field by more than a half second. It was Alabama’s first SEC 100 backstroke title since Bryan Jennings won it in 1985.

— Alabama’s 400 medley relay bettered the previous conference record, set by Auburn in 2009, by a quarter of a second. Connor Oslin opened things up with a fastest backstroke split of the night (45.45) while Kristian Gkolomeev closed things out with the best freestyle split (41.33). Alabama was almost a second ahead of runner-up Florida.

— Hugo Morris recorded the first-best time in school history with a 1:42.11 in the men’s 200 fly championship

— Michael Duderstadt’s 51.93 in the men’s 100 breast final is the second-fastest time in school history

— Junior diver Kahlia Warner set a school-record on the women’s platform dive with a score of 326.45 points

— Nicolas Fink is the fourth Bulldog and the ninth overall to win an SEC event all four years. He joins fellow Bulldogs Sebastien Rouault (500 and 1,650 free) and Mark Dylla (200 fly).

— Smoliga is UGA’s first SEC champion in the 100 backstroke since Neka Mabry in 2001.

— Senior Christina Bechtel won the SEC championship in the 200 butterfly with a time of 1:52.78. Bechtel’s first SEC title, she becomes the 13th Wildcat in program history to win a conference title. Bechtel is the third UK swimmer to win a title in the 200 butterfly, after Rachel Komisarz won in 1998 and Daniel Cruz claimed the title in 2005.

— Sophomore Danielle Galyer recorded a program-best time with a 52.17 to place fourth in the 100 backstroke.

— UK broke its seventh school record time of this year’s championships with a 3:34.71 in the 400 medley relay.

— Along with Bechtel and Galyer, sophomore Kyle Higgins advanced to the A final and placed eighth overall in the 200 butterfly with a 1:43.36 after a 1:43.64 in the prelims, the second-fastest time in UK history.

— Both LSU 400 medley relay teams broke school records. The men’s record was originally set in 2013 and the women’s was set last year.

— Diver Cassie Weil won gold and broke her own school record with a score of 331.60.

— Bettridge finishes SEC Championships by accounting for 87 points for the women. That’s the most by an athlete in LSU Swimming and Diving history.