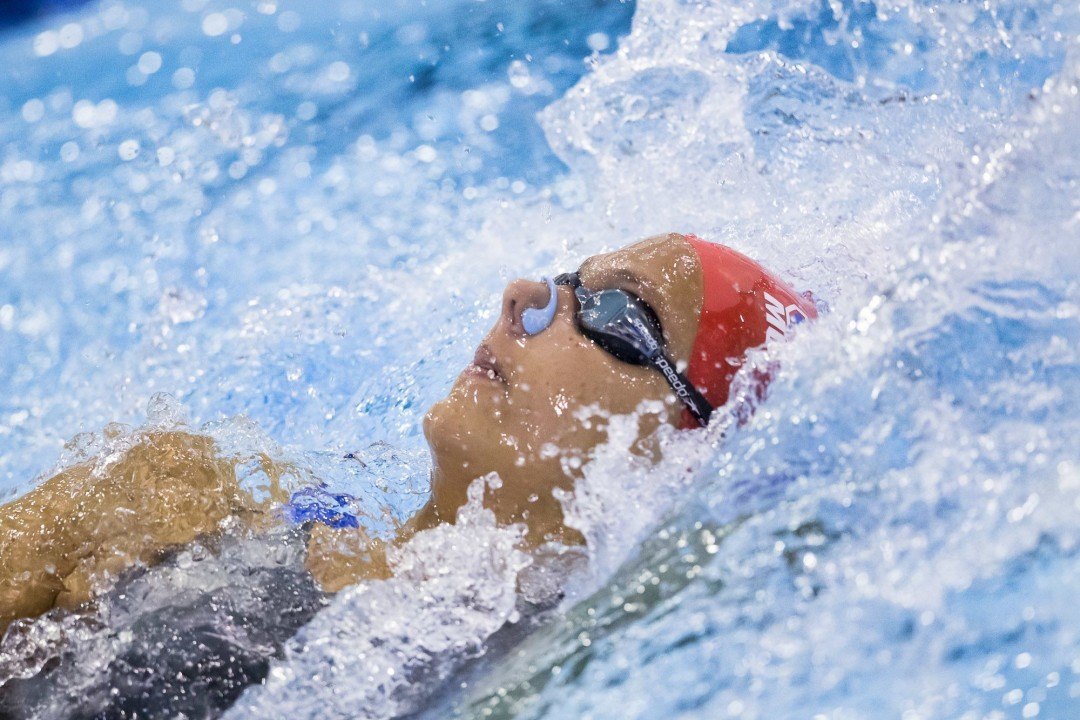 SMU's Isabella Arcila broke another Conference Record on Day 3 of the 2015 AAC Championships.

GREENSBORO, N.C. –  SMU’s women added five event wins Friday to build a sizeable lead in the team standings, while East Carolina took over the top spot on the men’s side heading into the final day of competition at the American Athletic Conference Swimming and Diving Championships at the Greensboro Aquatic Center.SMU won five of the seven events competed Friday, giving the Mustangs a 122-point lead in the women’s standings with seven events remaining. The Mustangs have 550 points to hold a comfortable margin on second-place UConn, which has 428 points. East Carolina is third with 391.5 points, followed by Tulane (331.5), Houston (314) and Cincinnati (295).

The race is much closer on the men’s side, setting the stage for an exciting day of competition Saturday. East Carolina won just one event Friday, but the Pirates’ depth pushed them into the lead in the team standings with 609 points. SMU, which held the lead through the first two days, remains well within reach with 576 points, followed by UConn (498) and Cincinnati (392).

SMU’s first win of the night on the women’s side came in the 400-yard individual medley as sophomore Kirsty McLauchlan, who was the runner-up in the 200 IM Thursday, turned in an NCAA ‘B’ time of 4:14.82 to win by more than four seconds. Sophomore Marne Erasmus followed with a win in the 100 butterfly as she defended her 2014 American Athletic Conference title with a time of 52.28 seconds.

Another Mustang sophomore, Tara-Lynn Nicholas set the meet record in the 100 breaststroke as she led a 1-2 SMU finish in 59.12 seconds, automatically qualifying for the NCAA Championships. Senior Rachel Nicol, who won Thursday’s 200 IM, was second in 59.94.

SMU added another meet record to its Friday haul as Isabella Arcila set the conference standard in the 100 backstroke, touching the wall in 52.90 seconds, leading a group of four Mustang swimmers in the championship final. Arcila earned her second individual title and meet record of the 2015 championship as she took the 50 freestyle Thursday night.

The Mustangs closed the women’s portion of Friday’s competition with a win in the 400 medley relay as SMU edged East Carolina for the top spot. The Mustangs clocked 3:40.18, while the Pirates turned in a 3:41.46 effort.

Cincinnati sophomore Jackie Keire picked up her second individual win of the 2015 championship as she broke her own meet record in the 200 freestyle. Keire finished in 1:44.70 to complete a sweep of the 200 and 500 frestyle events for the second straight year.

Houston, which took the top four places in one-meter diving Wednesday, continued its dominance on the board as the Cougars took three of the top four spots in three-meter diving. Sophomore Taylor Olanski, last year’s American Athletic Conference champion on the platform, took home the springboard title with a meet-record 325.30 points. Danielle Shedd, who won the one-meter springboard Wednesday, was the runner-up Friday with 314.40 points, while last year’s three-meter champion, UConn’s Taryn Urbanus, took third with 314.20.

On the men’s side, East Carolina’s only event win Friday came in the 100 breaststroke as senior Rokas Cepulis, the only Pirate in the championship final of that event, took the first-place points by finishing in 53.00 seconds. Cepulis won the 200 individual medley Thursday and added his second American individual title to his collection with the 100 breast performance.

SMU junior Samuel Straughan was a double winner Friday as he led a strong performance for the Mustangs in the 100 butterfly, winning the event in 47.18 seconds. The Mustangs also took second and fourth in the event as Tyler Rauth was the runnner-up in 47.24 seconds and Tucker Wells was fourth in 48.45. Straughan went on to win the 100 backstroke as he finished in a meet-record 46.60 seconds, provisionally qualifying for the NCAA Championship.

SMU freshman Christian Scherubl won his second individual title in his rookie year as he went 1:34.89 in the 200 freestyle, his fastest time of the year and a provisional NCAA qualifying mark. Scherubl took the 500 freestyle Thursday night as well.

The Mustangs closed the competition Friday by erasing the meet record in the 400 medley relay. SMU won the event in 3:10.89 to edge East Carolina, which finished in 3:11.73 and saw its streak of three straight relay wins snapped.

Cincinnati’s Ryan DePietro gave the Bearcats their first individual title of the 2015 championship as he won the 400 individual medley, defeating last year’s champion, UConn’s Sawyer Franz, by more than four seconds. DePietro touched the wall in 3:49.08, while Franz was second in 3:49.36.

Competition concludes Saturday, with preliminaries at 10 a.m. ET and finals at 6 p.m. ET.

For complete coverage of the American Athletic Conference Swimming and Diving Championships, visit The American’s Championship Central atwww.theamerican.org/swimdive. Updates will also be published to the @American_SwimTwitter handle.