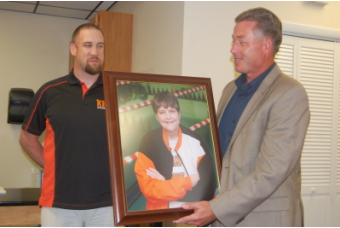 Former Whildin swimmer Scott Miller presents Joe Kovalchik with a portrait of Gwen, provided by her sister Sara, to be placed in the pool area.

Back in January, we reported on the death of legendary Pennsylvania high school swimming coach Gwen Whildin, however, her legacy will continue to live on through the actions of one of her former athletes. Scott Miller found that the best way to honor her name and her numerous accomplishments as a coach was to rename the Northampton Middle School pool the “Gwen L. Whildin Natatorium”.

Miller began the process by creating an online petition to prove to the school board that there was support from the community, and her former athletes that have since moved away, to make this change. Once the school board passed the notion, he went out to collect donations for the sign that will display the new name of the pool. He raised over $9,200 to fund the sign, a plaque that will list her stats and championship titles, and a scholarship fund in her name.

As a coach for the Northampton High School boys swim team, Whildin coached her athletes to 18 individual state championships, eight Mountain Valley Conference team titles, and the 1993 PIAA State Championship title. From 2006-2007 she coached the Emmaus High School girls team to a state championship, winning six individual titles in the process. She returned to Northampton for the 2009-2010 season and was awarded the 2014 Express-Times Swimming and Diving Coach of the Year.

The unveiling of the sign will take place on December 12th at Northhampton’s first home varsity swim meet.