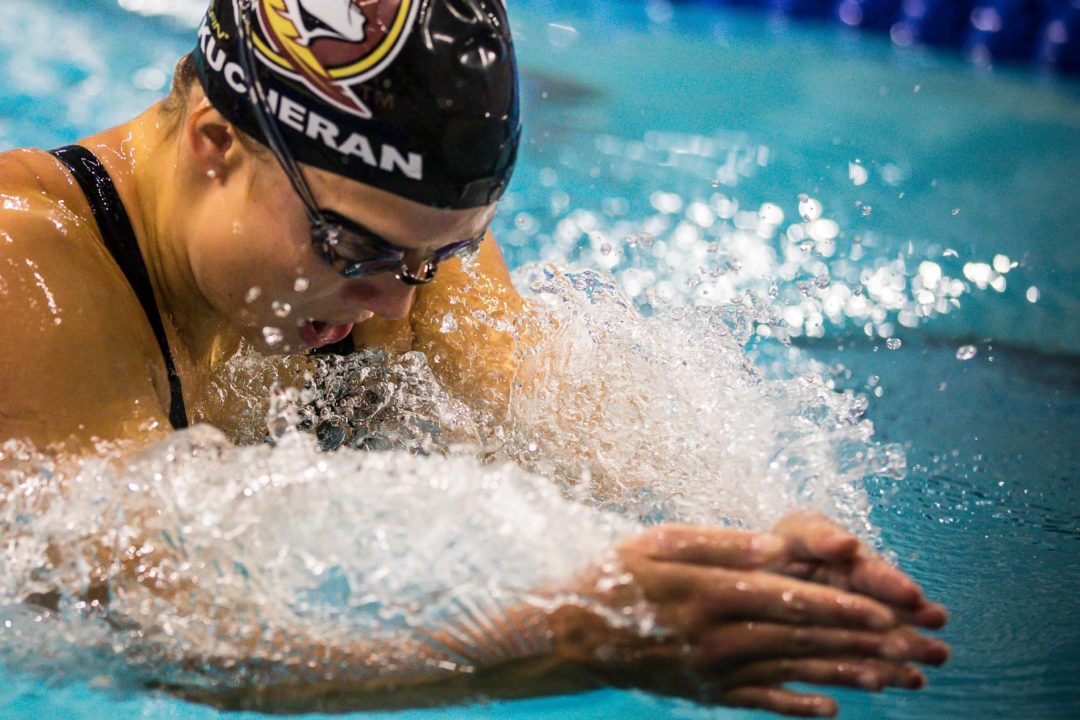 Kucheran would have been Florida's only 100 breaststroker this past season under the 1:00 mark as her best time stands at a 59.02. Archive photo via Jack Spitser/Spitser Photography

Nina Kucheran has announced she will be using her COVID-19 fifth year of eligibility at Florida. Kucheran originally committed to Cal back in May before any abuse allegations came out about Cal’s head coach Teri McKeever.

Kucheran made the announcement by placing “UF Swim ’23” in her Instagram bio. Kucheran told SwimSwam that Florida stood out to her because she “had a tough time deciding between UF and Cal the first time around.” She was accepted into a masters in Kinesiology and human performance at UF which she said: “lines up really well with my goals beyond swimming”.

She spoke about staying in Florida after spending time at Florida State saying “I also really love Florida and am excited to stick around in the region.” She also spoke of the coaching staff at Florida saying they have “done an amazing job with the team in the last few years and I’m excited to learn from them and be somewhere that lines up well with my swimming and academic goals!”

Kucheran has the potential to make an immediate impact for Florida at both the conference and NCAA levels. Kucheran’s best time in the 100 breaststroke would have been the fastest on Florida’s roster this past season by almost two seconds, making it the only time under the 1:00 mark.

Her best time of 59.02 from ACCs would have made the B final in the 100 breaststroke at NCAAs. Florida had no breaststrokers qualify individually at NCAAs where the Gator women finished 13th overall.

The team was relatively thin in the breaststroke events partially due to Cecilia Porter only competing in one meet during the 2021-2022 season as well as Vanessa Pearl‘s medical retirement midway through the season.

Fml will cal ever be good again?

Her best time would break the school record (59.22) in the 100 breast. Great pickup for Florida and massive upgrade for Nina!

Nesty can you train her to be a 1:05 LC 100 Breastroker too for Canada’s sake

Nina Kucheran upgrading her Florida team by a lot!

Will Cal keep Teri even if she has no team to coach? Could they hurry up and hire a new head coach already?

No and no. Have to wait for the legal process to play out.