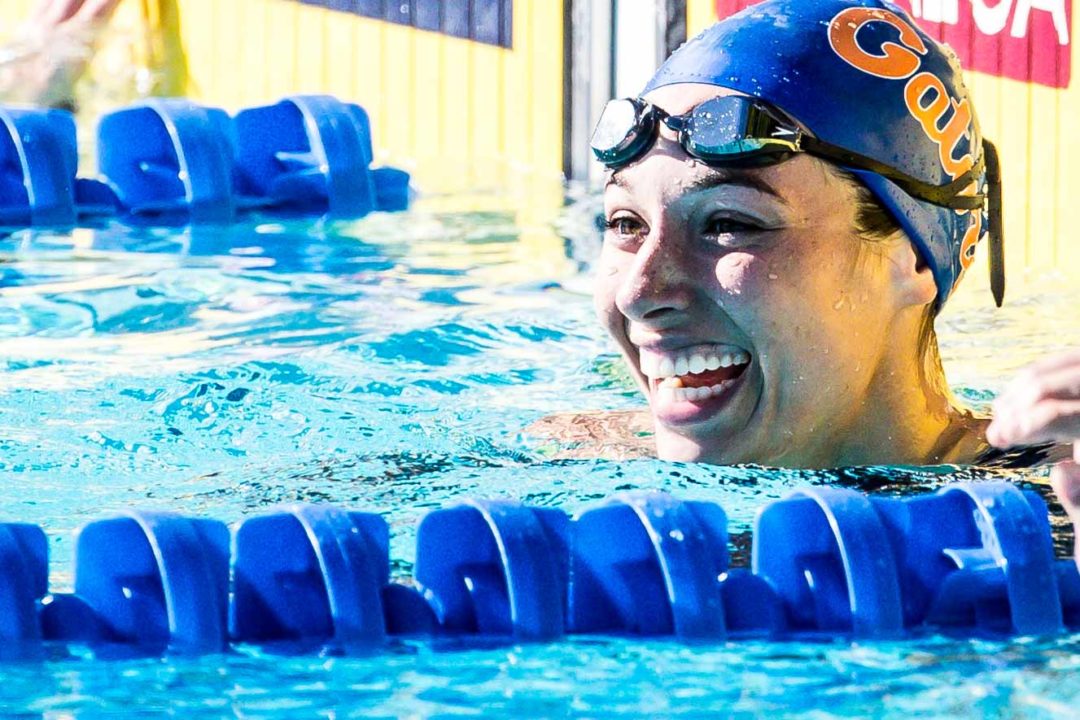 Without Vanessa Pearl (above) or Cecilia Porter, the University of Florida women's team faces big breaststroke challenges ahead of the SEC Championships. Archive photo via Jack Spitser/Spitser Photography

University of Florida swimmer Vanessa Pearl has medically retired. After sitting out the fall semester, Pearl told SwimSwam on Wednesday that she made the decision to end her collegiate swimming career in December.

She does plan to remain at the school to complete her degree.

This would have been Pearl’s 4th year of collegiate swimming. Pearl was a three-time NCAA qualifier, earning eight career All-America honors. That included two as a freshman, five as a sophomore when the CSCAA gave All-America awards to all qualifiers after the NCAA Championship meet was canceled, and another as a junior.

Her junior season saw her highest individual finish at the NCAA Championships, placing 10th in the 200 IM. She also finished 25th in the 400 IM and 36th in the 200 breast at that meet.

As a freshman and sophomore, she was also the team’s primary breaststroker on its medley relays. She was bumped for that spot by Cecilia Porter as a junior.

Porter, who is on the Gators’ roster as a sophomore, has also been absent for most of this season. She raced at the team’s opener against Florida Atlantic, winning the 100 breaststroke, but hasn’t raced since. The school has declined to comment on her absence, and she has not responded to messages.

This has left the Gators very thin in the breaststroke races. Their top performer so far this season, Tyler Mathieu, was 1:00.95 at the midseason Georgia Tech Invite, which ranks her 17th in the conference.

Mathieu has primarily been a distance freestyler to this point of her college career, though she’s been swimming more breaststroke this season to fill in that gap.

With the challenges on the breaststroke leg, Florida’s 400 medley relay ranks just 10th out of 12 teams in the SEC so far this season.

Pearl was the Gators’ second-highest scoring athlete, and highest-scoring swimmer, at the 2021 SEC Championship meet. She scored 74 points, led by a runner-up finish in the 200 IM, as the Gators placed 2nd overall.

Pearl was the #6-ranked recruit in the high school class of 2018 when she committed to Florida. A native of McKinney, Texas, she was the 2018 Texas 6A High School State Champion in the 100 breast and 200 IM, a US National Team member in the 2017-2018 season, 2017 US Open High Point Winner, and USA Swimming Scholastic All-American.

Florida’s next meet is the 2022 SEC Championships, which will be hosted at the University of Tennessee from February 15-19. Based on a Swimulation of current season-best results, Florida would finish 5th at that meet in swimming points.

Medical retirements generally offer athletes who suffer career-ending injuries an opportunity to still have their education paid for. Athletic directors have the option to pay out a student’s scholarship or offer them financial aid; it is essentially a form of insurance for college athletes.

Best of luck to Vanessa in all your future endeavors!

Just an observation, but looking at the rankings for the class of 2018, many of the top 10 recruits have had similar issues. #1 Eva Merrell I don’t believe ever swam for Georgia, #2 Taylor Ruck has been very public about her struggles, #3 Zoe Bartel retired, #5 Cassidy Bayer has been public about her eating disorder, #6 Vanessa Pearl medically retired.

I’m glad these girls are not only doing what’s best for them, but also shedding light on some of the issues facing swimmers and elite athletes.

Add in Grace Ariola in there.

All kudos to these individuals for doing whats best for them and also being vocal for others to potentially relate to the same struggles. All the best to them

some might say that is small sample size but some other might say maybe there is something wrong somewhere is swimming in USA….

Congrats to Vanessa on the conclusion of outstanding swimming career and for making an important, difficult decision. She’s a Lady Gator forever and will soon be a UF graduate! So many exciting events to look forward for her…

She posted on her Insta in 2020 that she’s had chronic migraines daily for the past (then) ten years, and it had gotten to the point where she was having multiple migraines per day and unable to concentrate on anything but the pain. My mother suffers from severe migraines, and she all but has to hole herself in a quiet, completely dark room until they subside. She becomes a shell of herself for hours after. It takes a huge toll mentally. How Vanessa was able to get through practices with them is incredible. That she was able to break the school record in the 200 breast at 2020 SECs after sitting out most of the fall is a testament to… Read more »

In the last 3 months, there’s definitely been a higher prevalence of medical retirements for mental health reasons. I’ve got lots of theories on this, but I’d like to vet them a little first before I put them out there.

I swam in the early 2000s and swimmers did it back then too. I think it’s more publicized now with social media and sports media. Back then, you just didn’t hear swimmers say mental health but it happened a lot.

I swam in the late 2000s and plenty of swimmers quit for mental health reasons, often eating disorders. I don’t think most were given the option to medically retire though, because it wasn’t seen as a medical issue. They just quit the team. I’m glad that’s changing.

Can I speak to a manager?

Good Luck Vanessa. This has a been a rough two years on so many. Best wishes in all your future endeavors. Be well.