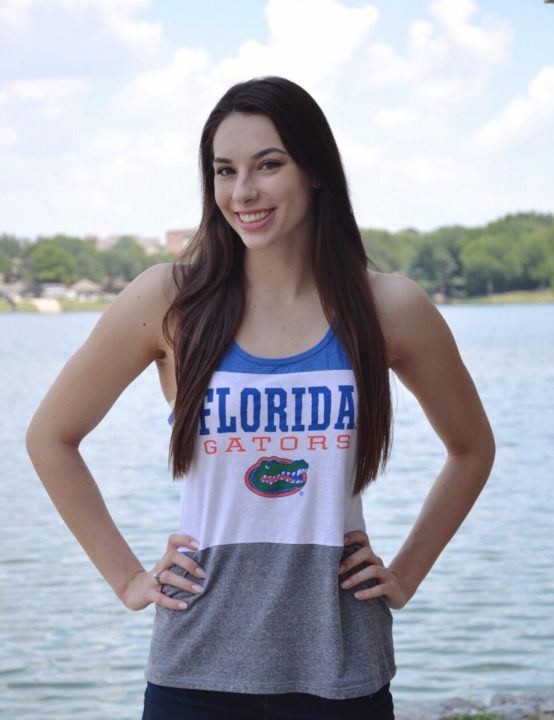 Our 6th ranked recruit for the 2018-19 season Vanessa Pearl has verbally committed to the University of Florida. Current photo via Vanessa Pearl

Vanessa Pearl of Metroplex Aquatics announced her verbal commitment to the University of Florida Wednesday, breaking the news over twitter. She attends McKinney Boyd High School in McKinney, Texas.

Extremely excited to announce my verbal commitment to swim for the University of Florida! Go Gators! ??? pic.twitter.com/TYkAkgBOyy

Pearl, a native of Allen, Texas, is the #6 ranked recruit in our recent top-20 rankings for the 2018-19 season. Pearl is very versatile, boasting the accolade of being the top 400 IMer in the class. Her personal best of 4:06.73 would have easily scored at NCAAs last year, just missing the A-final cut (4:06.00). Florida has been known for producing excellent IMers in the past, with examples including Ryan Lochte, Elizabeth Beisel and Conor Dwyer.

Along with her 400 IM prowess, Pearl was also a national junior team member in the 200 breaststroke back in 2015-16. Her short course best of 2:08.51 would have also cracked the consolation final at NCAAs in March, giving the Gators some much needed star power that was lacking this year. Despite all of the success the men’s team has had recently, the women went scoreless at NCAAs for the first time in program history this past season. Pearl will be a welcome addition for the Gators in 2018. Her 200 breast is ranked 2nd amongst the 2018-19 class, trailing only #3 Zoe Bartel‘s 2:07.73.

Discussing why she chose Florida, Pearl mentioned she had an instant connection with the coaches, and loved the campus and her program.

“I chose UF because I believe it is the best fit for me. I quickly had a great connection with the coaches and feel that they will push me to become the best swimmer I can be. I fell in love with the program and the people who are in it. The campus is absolutely breathtaking and I adore the location. In addition to swimming I will be pursuing environmental engineering as my major.”

She began swimming at the age of 6, and also played volleyball and basketball as a kid. At the age of 11 she decided to drop volleyball to focus solely on swimming. “I started swimming when I was 6 years old and have always loved the sport and I have a deep appreciation for how much it has taught me throughout the years.”

Though no family members of hers swam collegiately, her father played basketball for the University of South Alabama and went onto play three years professionally in Belgium after school.

If you have a commitment to report, please send an email with a photo (landscape, or horizontal, looks best) and a quote to[email protected]

Well, I did try to persuade her to apply to Princeton. I work out sometimes in the natatorium used by Allen High School and Metroplex Aquatics where Brent Mitchell coached both teams. I talked with her and her mother at the McKinney college fair also. She will be joining Rachel Ramey at Florida who won the 5A state championship in Texas in 2016 in the 100 breast in 1:01.78; Ramey swam for Frisco Heritage High and Texas Ford Aquatics. Her record was broken today by another North Texas swimmer, Emma Garfield of The Colony, who went 1:01.74. Meanwhile, in the 6A final Pearl took first in both the 200 IM (1:57.20) and the 100 breast (1:00.12). The latter broke the… Read more »

She will join Texas Ford’s star breaststroker Rachel Ramey in the Class of 2021. A disappointment for me as I tried to get both interested in Princeton, a school with a long and prestigious tradition in swimming going back to 1904, which I documented in my 133-page online history of Princeton swimming and diving, recently reviewed here in SwimSwam. Though Princeton offers no athletic scholarships, its financial aid is given as grants, not loans, and can often be better financially for athletes in a sport like swimming where full scholarships are rare. Moreover, unlike athletic scholarships, this kind of aid cannot be withdrawn by a coach but is guaranteed for all four years.

Welcome to the SwimSwam peanut gallery, Vanessa. You know you’ve arrived when the commenters think they know what’s best for you. Best of luck at UF.

Yep, just like when people said that going to Florida was a mistake for Dressel

Did they do a good job with Hrafnhildur Lúthersdóttir from Iceland?

Yes. Got better every year. She was in the Olympic Final in Rio and I believe was 2:22 in the 200 Breast and won a medal at the 2016 European Championships.

Then I don’t understand all the hate on her decision.
1. She choose one of the great swimming schools
2. Florida has great academics.
3. and it looks like she will have a pretty good IM and breast training group.

I hope she will focus on breaststroke first there. She’s one of the best American hopefuls in the 200 breast. She can make the US olympic team in 2020.

Meili and king will still be here and Hannis as well.

Meili and King aren’t particularly strong in the 200.

I’d like to think that what happened this year at NCAAs was a wakeup call for UF and an event that will never be repeated. The team is very young and made some pretty massive time improvements this year. Breaststrokers have always been sorely needed, but that doesn’t seem to be a problem now with Rachel Ramey, Layla Black, and now Vanessa Pearl coming. They’ll have some pretty competitive medley relays in the future now with breaststroke options that don’t involve converting freestylers into utility hitters. Pearl’s 200 breast time is within a few tenths of the school record already.

Good for her! Great athletic tradition at Florida. While it’s true they didn’t score at NCAAs last year, they did have a lot of improvement and I’m sure Vanessa will be part of a bright future!

Improvement? They won NCAA not too long ago..