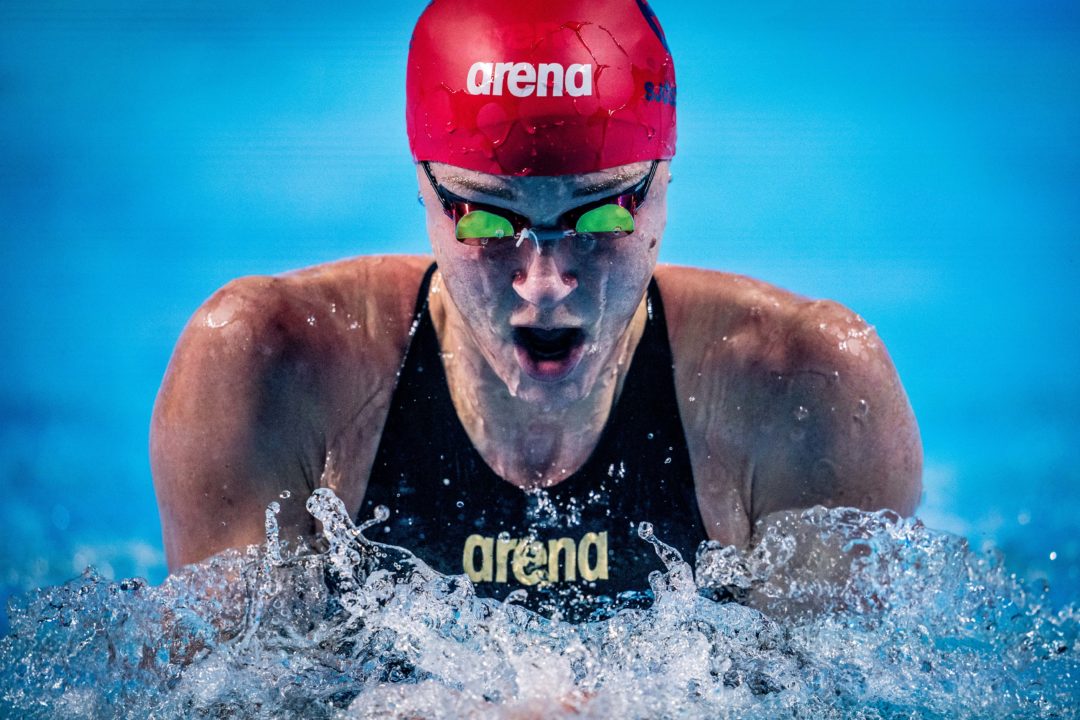 Sarah Sjostrom is in strong command of the Season 3 ISL MVP race, and the $100,000 prize that comes with it, for the second time in three seasons. Archive photo via Mine Kaspoglu/ISL

The team battle looks like it could come down to the wire in the 2021 International Swimming League championship match, especially after a big relay DQ swung momentum from Cali to Energy Standard at the end of day 1.

But there’s an even higher-stakes race on the line for the individual athletes: MVP.

The winner of the match MVP receives $20,000, double what Playoff MVPs scored.

Nic Fink, thanks to his big upset in the 50 breaststroke, little upset in the 200 breaststroke, and a lot of Jackpot points takes the day 1 lead in the MVP standings. With most of the swimmers at the top of the standings locked out of the ‘Skins’ standings, this battle could get very interesting.

It doesn’t look like Sjostrom has “big Jackpot” form at this meet, but if Fink can get another one in the 100 breaststroke, and Cali can win the mixed medley relay (which he will likely be on), then he’s got a chance at holding on.

The highest-ranked swimmer in the match MVP standings with a chance at a skins win is #7 Anastasiya Shkurdai, who will swim the 50 backstroke for Energy Standard. She has a 200 backstroke win during this ISL season, and was 2nd in the 50 individually on Friday, so that’s

While Energy Standard’s Sarah Sjostrom wasn’t at her best on day 1, she’s doing enough to ensure that she’ll be the Season 3 MVP. That’s her second MVP award in as many ISL seasons.

The only way Sjostrom was realistically going to be caught was if Siobhan Haughey went ham on day 1 (she had a good day, but not a massive Jackpot day), or if the women’s skins race was free, and Haughey finaled while Sjostrom did not.

There was only a little movement on day 1 of the finale (remember: no double points for the final anymore). Caeleb Dressel jumped Tom Shields into the top 10, largely on the strength of superior Cali relays, with both getting the chance to swim butterfly skins on Saturday.

The biggest movement was Ilya Shymanovich, who was upset twice on Friday by Cali’s Nic Fink, in the 50 and 200 breaststroke. He’s used to winning those races and getting big Jackpot points in the 50 breast. He’s in very little danger of sliding lower than 5th, however, regardless of what happens on Saturday.

In theory he certainly could. Shymanovich only has one individual left. Assuming Fink doesn’t completely fall apart tomorrow, at most Shymanovic should get a 24 point jackpot. He’ll probably win the MMR for another 6-8 points as well. So best case scenario he’s looking at 32 points tomorrow, but if he loses the 100 breast it’ll be more like 15 points.

So yeah. Assuming they both win, it all comes down to how big the jackpots in the 100 breast and 400IM are.

Yes, I kind of hope Fink upsets Shymanovich once again in the 100 breast which could even possibly earn him the final match MVP title.

At this point, I have no idea who’s going to get the match MVP, I’d say Dunks has a great chance too.

I would love this but I don’t think I see it. Even if he swims a PB in both the events he has left, his max points is around 58, and Fink, Sjostrom and Haughey are all likely to beat that.

If Fink really takes the win in 100 breast, he surely deserves the MVP.
As for Sjostrom, I think there is a possibility that she’s not going to get as many points as expected given her form on Day 1.
Despite being such a huge fan of Haughey, I think Mckeon is going to win the 100 free, so the only possibility for Haughey to get the MVP would be pulling a huge jackpot in 200 free.

Dunks is still in the line. Fun MVP race to watch, isn’t it?

And if Fink wins the 100 breast, it’s pretty much confirmed that Dunks is going to get 4th in the overall MVP standings, which is still a good thing.

I hope you’re right about Emma and Duncan! Seeing an Emma win and a Duncan MVP after all the bad luck the Roar have had would be fantastic.