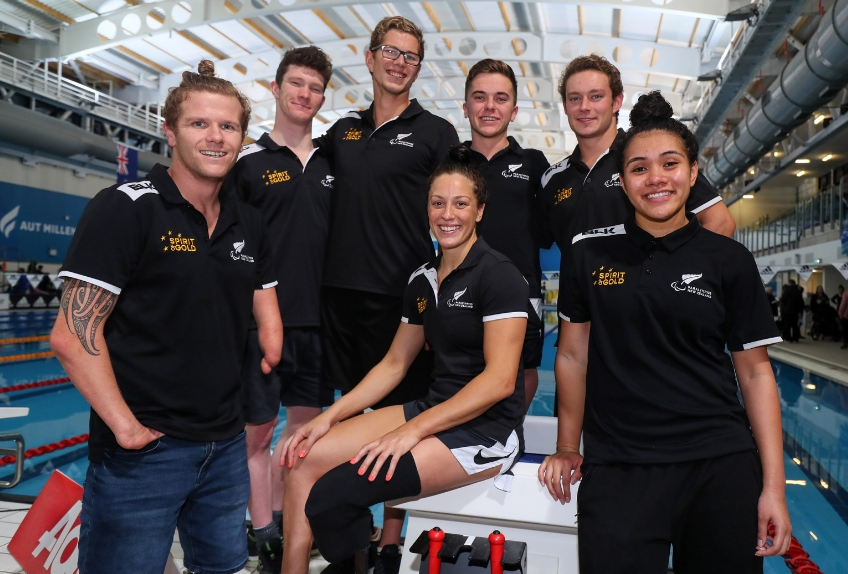 Malcolm Humm (PNZ High Performance Director) said, “We are thrilled with the quality of the Team we have announced today with 5 Paralympians and 2 further Para swimmers with extensive international experience. The Championships will provide an opportunity to test ourselves against full competition with over 600 competitors from 60 nations.”

Sophie Pascoe has taken the NZ Open Championships by storm this week setting an astonishing 4  world records and numerous personal bests. She attributes this success to mixing up her training and increasing her land-based sessions. Pascoe will go into the World Para Swimming Championships in September with her competitors and the world watching. She will be aiming to build on her success of this week as she sets her sights on the Tokyo 2020 Paralympic Games just over one year away.

Cameron Leslie will go into the World Para Swimming Championships with #1 or #2 world rankings in 3 of his favored events, and 2 other events waiting in the wings, including his favored Men’s 150m Individual Medley. Last year Leslie was appointed as National Para Swimming Coordinator with Swimming NZ working to grow Para swimming and the pathways from a regional swimmer to higher honors.

Tupou Neiufi has produced some excellent performances in Para swimming since her change in classification in Melbourne earlier this year and will go to London ranked world number 3 in her favored 100 m backstroke. At this week’s NZ Open Championships Neiufi also took a huge 14 seconds off her personal best time in the Women’s 200m Individual Medley SM8. This will be her first World Para Swimming Championships and she will be looking for continual improvement on her personal bests with an eye on the podium.

Hamish McLean will join Neiufi as a World Championships debutant, although already having made his Paralympic debut in Rio 2016. Christchurch based McLean who currently studies a Bachelor of Engineering will be looking to improve on his performances in Rio 2016 as he continues to build his international experience.

Jesse Reynolds has had a number of solid performances this week and qualified for World Para Swimming Championships selection on day one. Reynolds made an outstanding Paralympic debut in Rio 2016 swimming personal bests and making finals. More recently at the Gold Coast Commonwealth Games Reynolds was just outside of the medals placing fourth twice by the narrowest of margins. He will be looking to go one better in London.

Chris Arbuthnott will make his World Championships debut in September providing an opportunity for Arbuthnott to learn and perform with the best Paralympians and Para athletes in the world. Arbuthnott who moved to Auckland from Palmerston North two years ago to focus on his Para swimming career, will be looking to perform to his best in London under the watchful eye of coach Simon Mayne.

Celyn Edwards has made a meteoric rise through Para swimming in recent years cumulating to date with two top 6 finishes at the Gold Coast Commonwealth Games. Following this week’s NZ Open Championships he is now ranked 6th in the world for the Men’s 200m Individual Medley SM8.

The 2019 World Para Swimming Championships (London, England) will take place from 9 – 15 September with 600 competitors from 60 nations. The Championships will see this event take place at the Aquatic Centre that was used for the London 2012 Paralympic Games.