Never Do a Swimming Drill Again! 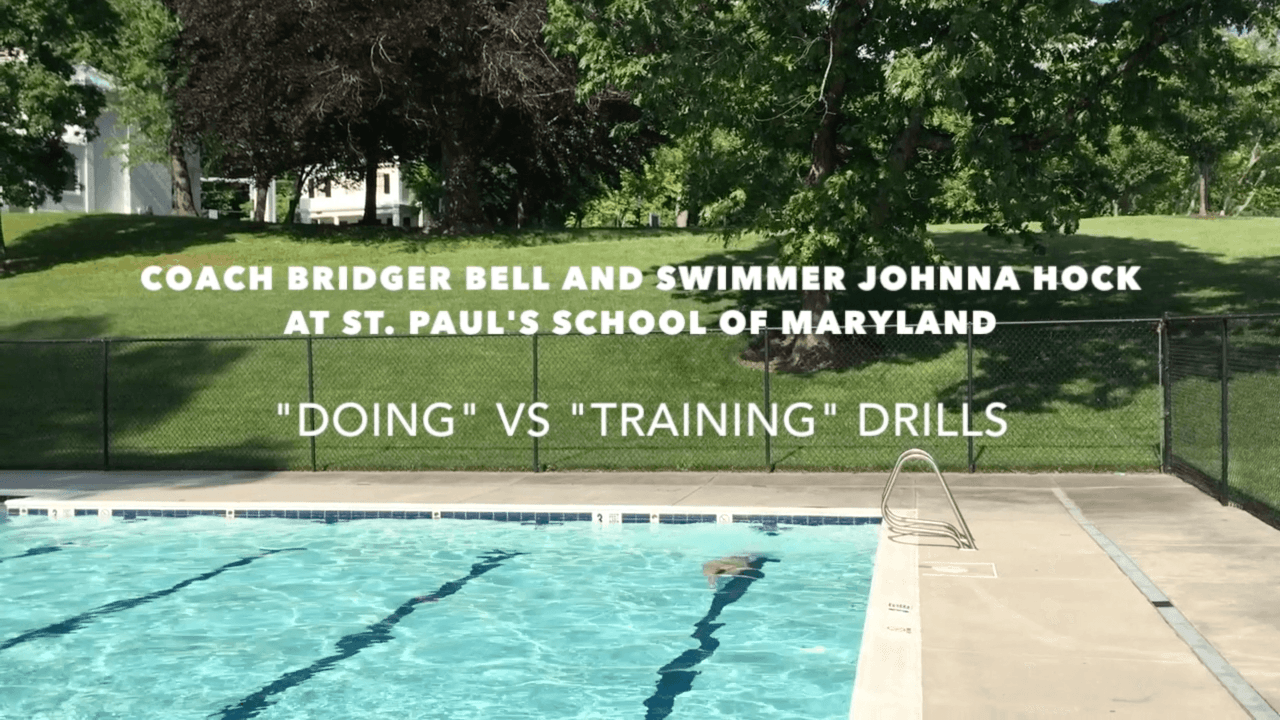 “Ultra-Short Race-Pace Training” (USRPT) advocates the exclusion of drills and equipment. While many programs could benefit from moving partway in that direction, the extreme that USRPT advocates may not be ideal for most: it rejects the use of kickboards, fins, paddles, etc. as well as stroke drills in training. Taking a more nuanced position, this article argues against “doing” drills but in favor of “training” drills.

It might be tempting to view that as a silly semantic distinction. It’s not. Words matter. Language structures our thoughts, which then influence our behaviors. When we speak of “doing” drills, it may promote:

• “doing” drills without sufficient attention to how they program the body to perform desired movements and engage desired energy systems for an actual race. (Indeed,USRPT’s rejection of drills is based in part on drills’ irrelevance to training the energy systems that are actually used in racing.)

Yes, you “did” one-arm freestyle, but HOW did you do it? To what end? What was the timing of your breath within the stroke cycle? Was your kick strong and fast throughout? Was your nose pointed at the bottom of the pool when you initiated the catch? [Coaches, was each and every swimmer in the water performing the drill in a way that will effect the particular stroke changes you want to see?]

Yes, you “did” the drill, but when did you revisit it? A few weeks later (rather than almost every day)? Doing a drill a few times a season won’t effect motor learning. Without thousands of stroke cycles over an extended period of time, the drill will have no effect on muscle memory programming and thus no effect on your racing stroke.

• “doing” drills without sufficient speed and application of force to translate into racing.

Yes, you “did” single-double butterfly drill, but did you apply the same force with each pull that you would in a race? Was the tempo of your kick/stroke cycle the goal tempo for your races? Did your kicks have the speed and force you’re training to race with? Was your head position consistent throughout with the position you want in your race?

Yes, you “did” breaststroke with a flutter kick, but was your catch explosive? Did you hide your head between your arms when you extended them? Did you whip through the top of the stroke to the extension in the blink of an eye?

Yes, you “did” a particular freestyle drill to effect a particular change in your stroke, but then did you come back the next day and warm up with poor technique that most likely just reinforced all your old bad habits, undoing any progress the drill had set you toward?

The idea of “doing” a drill often becomes akin to checking a box. Have we “done” drills? Yep. Check! Move on.

The better alternative is “TRAINING” drills.

• “Training” drills means sticking with a drill for more than a month, training it (nearly) every day for thousands of stroke cycles to program muscle memory.

• “Training” drills means ensuring your technique is correct, which means you and your coach must know exactly which aspects of the drill effect which outcomes in your racing stroke; then, perform the drill with exacting, unfailing precision every stroke cycle.

• “Training” drills means performing them at full speed/tempo with the same timing as your racing stroke and the same explosive force with which you sprint.

• “Training” drills means you don’t UN-train them, which means ensuring the technique developed by the drill translates into your full stroke every time you swim it in practice. This means avoiding long, slow swims of full-stroke that leave too much room for bad habits to resurface. Slow swimming begets slow swimming. Water is elastic: if you don’t apply explosive force, you slip through the water and it becomes forgiving of stroke mistakes / bad habits. When you’re “training” drills to effect changes in your strokes, be judicious about when and how you train the full stroke. Make each lap count. Know the purpose and find the value in each lap. Protect your progress.

Leave no swimmer behind (peer coaching):

When we introduce a new drill to a practice group, we want each swimmer to master the essential aspects of the drill before training it. It does no good to train a drill if it’s not being performed correctly. Often, the introduction of a drill is a great opportunity for peer coaching: “Team, help each other get there.” They often coach each other more effectively. Once everyone has mastered the drill, we train it and train it and train it. Swimming is a muscle-memory sport.

“Doing” a drill is a waste of time. “Training” a drill for thousands of stroke cycles over an extended period can effect desired stroke adjustments for racing and foster faster swimming.

Session enrollment is limited to ensure quality instruction with small coach-to-swimmer ratios. Expand the limits of your abilities, have lots of fun, and enjoy making new friends. Remember, availability is limited, so please call as soon as possible.

Bridger Bell’s articles/videos are becoming great resources for swim coaches. I do not know off hand of any swimmers he has brought to the elite National level yet, but he does an amazing job of articulating many ideas/concepts I think coaches want to apply but cannot verbalize or organize in their heads. Good luck in your new position.

I agree a lot with this article. Coaches love to make their swimmers do drills and yet fail to make them purposeful. I agree a lot with the USRPT idea of cutting drills. They should only be used if absolutely necessary. In a younger swimmer who doesn’t understand a technique you are trying to change or improve a drill can be very helpful. In more elite swimmers I believe drills should almost entirely avoided. Only if a swimmer can’t make the change with their normal stroke should a drill be used. If you have good technique whats the point of doing a drill? The metaphor I like to use is: If you’ve learned a guitar solo well and don’t make… Read more »