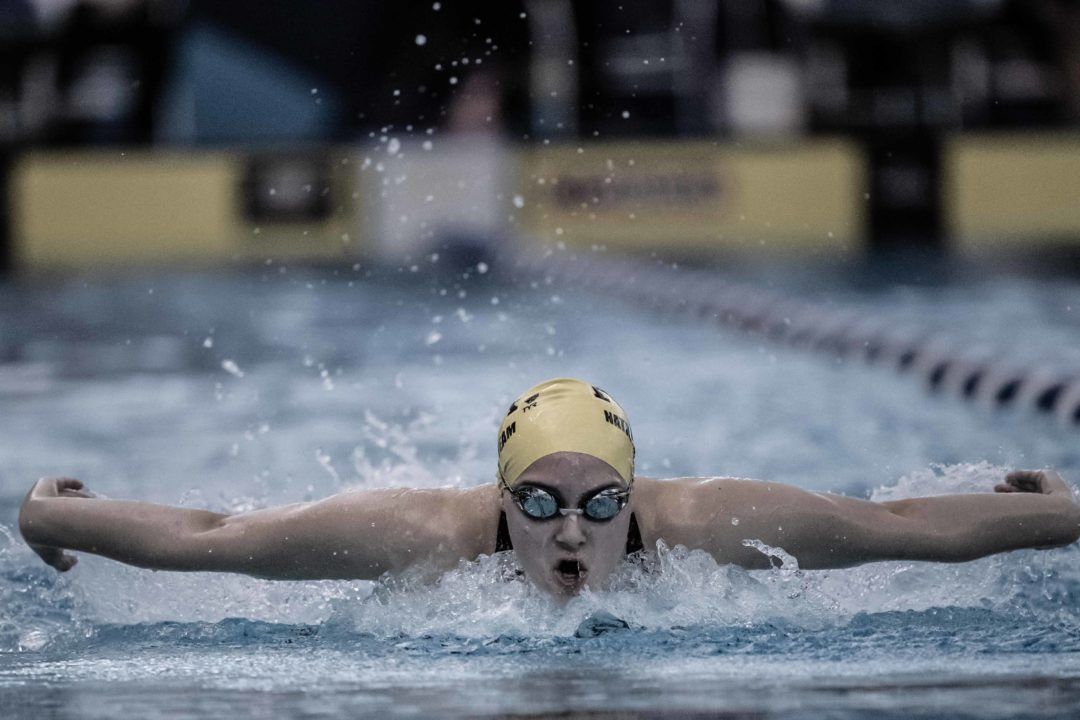 Tiffanie Ruan, Megan Cziezczak, McKenna Stone (above), and Rachel Stege swam a 400 free relay faster than all but one college team has this season. Archive photo via Mike Lewis/Ola Vista Photography

Despite the training difficulties swimmers endured around the world due to the coronavirus pandemic, 3 high school records fell in Naperville, Illinois today, just west of Chicago. Neuqua Valley High School warmed up with a virtual dual meet win, breaking 3 school records in the process, and went on to dominate sectionals all in the same week.

The meet marks the end of the girls’ high school modified season, which won’t have any state championship events, but instead is focused on smaller Sectionals meets.

Because of the lack of relays at the official sectionals meet, swimmers were allowed to enter up to 4 individual events.

In the virtual dual meet between NVHS and Waubonsie Valley High School, NVHS’s 400 free relay of Tiffanie Ruan, Megan Ciezczak, McKenna Stone, and Rachel Stege won in a time that both shatters the school record and ranks them 2nd among NCAA teams this season (3:20.65). The relay would place ahead of Georgia and right under Missouri (3:18.47).

The National public high school record in that event is a 3:15.38 done by Carmel High School in Indiana in 2015. That relay included Veronica Burchill, Claire Adams, Kendall Smith, and Amy Bilquist.

They missed the National public high school record in this relay, also set by Carmel High School in 2015, by a mere .30 seconds. The Carmel relay team consisted of Burchill, Adams, Smith, and Trude Rothrock.

Stone, who has committed to Cal, is a recent addition to the NVHS team. She competed for Metea Valley High School last year where she was the state champion in the 100 fly. Stege has committed to Georgia, Ruan to SMU class of 2025, and Ciezczack to the University of Kentucky.

In long course, Stone and Stege are qualified to compete at the 2021 US Olympic Trials.

Last year’s DuPage Valley Conference (DVC) diving champion Jane Riehs also competed at the meet in the 1 meter event. She finished in 1st place with an overwhelming lead of 295.05 points and set a new school record.

Neuqua Valley High School girl’s swim and dive is coming off of 2 Illinois State Championship wins in 2018 and 2019, while the boy’s team placed 2nd both years.

Neuqua Valley went on to win their Sectionals meet a day later on Saturday at Matea Valley High School, where only individual events were contested. There they won all but one individual event at the meet.

GIRLS SWIMMING: Congratulations to Neuqua Valley for taking home the sectional title. Unfortunately no State swimming but what a way for the Wildcats to end their season. @swimNVdiveNV pic.twitter.com/RrQ24fkt01

Other standout swims from the virtual time trial:

Winners and standouts from sectionals: