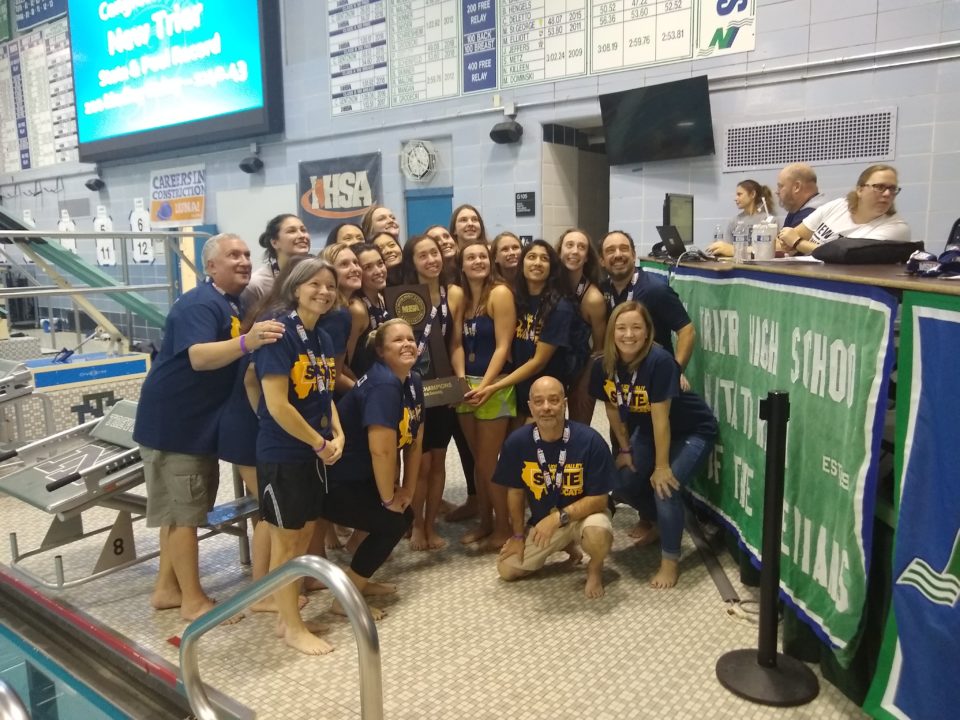 The tight battle for the state title fired off in Winnetka as the host New Trier aimed to dethrone 2018 state champion Neuqua Valley. After twelve events and five new state records, it was the Neuqua Valley girls who successfully defended their state championship title.

After placing third in the event last year, Lyons senior Cal Dunn crushed the 200 IM and won her first state title with a time of 2:01.10, blowing out the field by more than a second.

Future Texas Longhorn Oswego East senior Grace Cooper was the sprint queen of Illinois for the second-time in a row as she swept both the 50 free (22.39) and 100 free (49.29). New Trier’s Carly Novelline tried taking down Cooper in the finishing strokes of the 100 free, yet settled for a tight second place with a 49.38.

However, Novelline did not walk away empty-handed as she added a second state title to her collection with her 100 back winning time of 53.92. Taking second place in the event was the 2018 state champion Megan Armstrong of St. Charles North (54.79).

Neuqua Valley’s Jane Riehs won the 1-meter boards by 16 points over the rest of the top three. Her and teammate Elle Jacobson (7th) were able to contribute 26 points towards Neuqua Valley’s score.

In her only individual event after taking 2 runner-up finishes in 2018, Metea Valley’s McKenna Stone topped the 100 fly by over a second with a 53.38.

At this point in the meet, Neuqua Valley was on track to sealing their second-straight state title. Yet New Trier sophomore Gridley gave the home crowd one last hurrah in the 100 breast by defending her title with a 1:01.53.

The fast that 23.39 took the 50 fr in this very competitive swimming state puts some perspective on how fast Smoliga’s 21.99 was. I know a couple of other HS girls have now gone sub 22, but 21.99 is still smokin’ fast!

Cooper was 21.8 anchoring the 200 free relay. Not the same as a flat start, but still awfully impressive

Back to back! Way to go NVHS ladies!

Plus they swim in a 6 lane bath tub. The IL champs are one of the two most exciting meets I’ve ever attended.

You must be thinking of Evanston, where the boy’s championship is held. This event was at New Trier, where the pool, while still old, is 25y x 8 lanes.