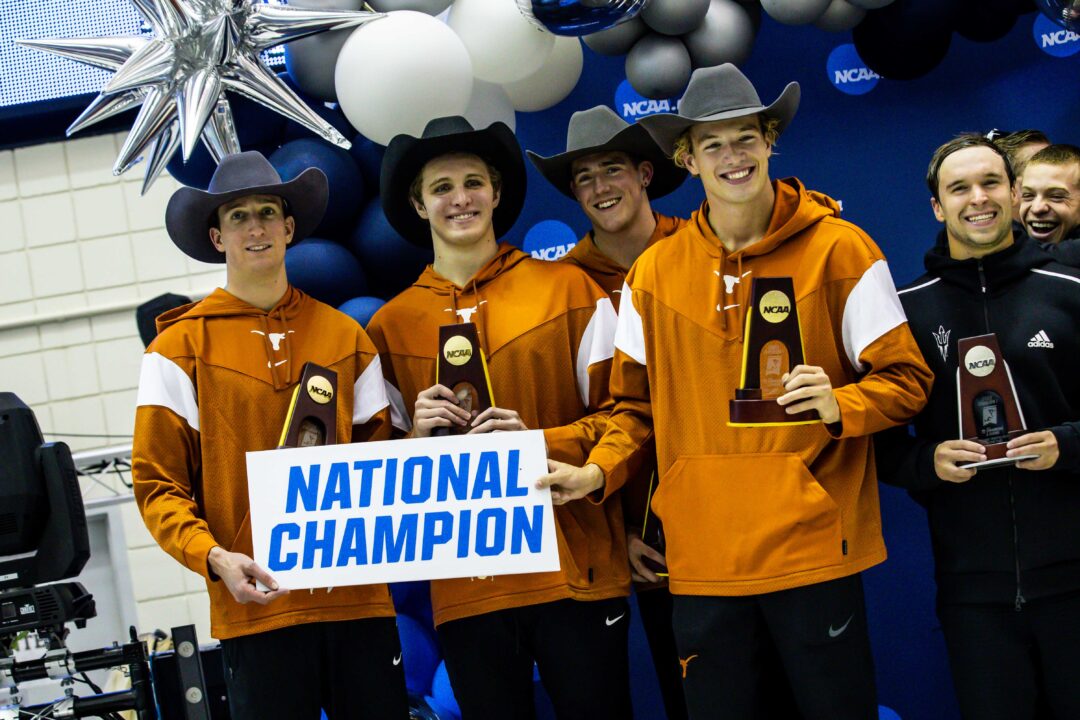 Just four months after winning the NCAA title in the 400 free relay, the Texas sprint cupboard could be on the cusp of being the barest it's been in years.

Imagine with me, if you will, for a moment, that college swim teams could post want ads targeting a specific type of swimmer they need to fill one or more gaps in their lineup. If this were a thing, further imagine that Texas coaches Eddie Reese and Wyatt Collins could be very well right now composing something along these lines:

Texas Longhorn Men in need of sprint freestyler (or two). Preferably have NCAA DI Championships scoring ability in the 50 and/or 100 free. Immediate opening for 2022-2023 season.

NCAA swimming success is almost invariably built on dominance in the sprint freestyles, and while the Longhorn men may be known primarily as a 200 free powerhouse, their run of top-two finishes over the last eight NCAA championships has coincided with Texas being a sprint free factory too.

Last year, three Longhorn men — Drew Kibler, Cameron Auchinachie, and Daniel Krueger — formed the core of Longhorn sprint excellence. Kibler scored in the 50 free, and all three scored in the 100 free. That trio, along with rising senior Caspar Corbeau, primarily a breaststroker, finished 3rd in the 200 free relay and won the 400 free relay.

But with Auchinachie having exhausted his NCAA eligibility (we’re 99% sure), and Kibler announcing that he’s gone professional and will not take advantage of a fifth year, it’s down to Krueger. He may yet return — some commenters have insisted that he is, but no one has officially confirmed that for us. If he doesn’t come back, this will be the first year since at least 2004 that the Longhorns won’t bring back any scorers from the previous NCAA champs in either the 50 or the 100 free.

We started this article a day or two after Kibler announced he wasn’t taking a 5th year (yes, it’s been a while, life happens), and since then, we’ve found out that Tim Connery is transferring to Virginia; the soon-to-be-sophomore actually had the fastest flat start 100 free time of any Texas guy not mentioned above, and his eastward move exacerbates Texas’ lack of freestyle sprint speed.

Before we go any further, take a deep breath Texas fans. The Longhorns are certainly not devoid of sprint talent (e.g.,  Corbeau had some gnarly free splits) and we’ve seen plenty of Longhorns who weren’t primarily 50/100 freestylers throw down some epic relay splits. But, the fact remains that the Longhorns appear to heading into a season where they’re taking a big step backward on the sprint free relays, and sprint free scoring, especially if Krueger doesn’t return.

But, let’s take a look at what Texas has returning in the sprint freestyles.

With Krueger, the Longhorns are looking at roughly a 1:15.5 (assuming Krueger leads off and subtracting one sounds from the aggregate times for relay takeoffs).  The Longhorns went 1:14.4 last year, finishing 3rd and climbing up the all-time ranks.  A time of 1:15.5, while only a second off, would’ve placed 7th or 8th at in 2022. If Krueger doesn’t return, the aggregate time (again, with an adjustment for relay takeoffs) comes out to roughly 1:16.1, which would’ve dropped the Longhorns to 11th or 12th.

Note from the above list how many of those guys haven’t improved their 100 free time since high school. That’s not saying that they haven’t improved in the event, but all four of those guys don’t swim the 100 free at championship meets because they focus on other events. Could any of them jump in on the 400 free relay and put up a big split? Sure, we’ve already seen that happen with Corbeau.

But that further illustrates the point we’re trying to make here — Texas has, for them, a historic lack of purebred sprinters with NCAA experience. If Krueger doesn’t return, there will be exactly one swimmer on the Longhorns’ roster who swam the 100 free at NCAAs, and that’s Zac Van Zandt, who finished 52nd with a 43.78. By way of contrast, the Longhorns’ arch rivals, the Cal Bears, had four underclassmen swim the 100 free at NCAAs last year.

With Krueger leading off a hypothetical Longhorn relay in a valiant 41.3, we get a total of 2:47.9, just inside the top eight at last year’s NCAAs. Take away Krueger, and that adds two seconds to the relay, at which point we’re talking about Texas barely scoring.

So, if Texas is advertising for a sprinter, where are they going to look?

First and foremost, Krueger coming back would be a huge boon to the Longhorn sprint corps. Never underestimate the value of someone who has not only been to NCAAs, but swam these events and has been part of several victorious relays.

It’s also quite possible that there is some impact transfer waiting in the wings to make an announcement. Over the last few years we’ve seen transfers like Jake Sannem, Chris Staka, Alvin Jiang, Maxime Rooney, and Auchinachie make an immediate impact. We figure it’s at least even money that Texas will pull in at least one more  transfer this summer, but, will he be a sprinter? Will Chan announced he’s transferring from Michigan. Like Corbeau, he’s primarily a breaststroker, so he’s not the slam dunk 50/100 free sprinter the Longhorns could really use, but he could factor into the free relays.

We could also be underselling the freshman a bit. Charlie Crosby and Alec Filipovic appear in the lists above, and they appear to be the closest to classic 50/100 free types, and they may very well develop into NCAA scorers. But again, their best times currently sit at 19.57/44.10 and 20.0/43.67. By way of comparison, Kibler and Krueger were 19.38/42.90 and 19.48/42.50 coming out of high school, so guys like Crosby and Filipovic would need an incredible amount of improvement in a short time to have the sort of impact Kibler and Krueger had as freshmen.

Lastly, of course, other guys on the roster could continue to improve and step up. Anthony Grimm dropped from 19.67 to 19.37 in the 50 free last season, and should continue to improve in his second year of college training. Peter Larson and Coby Carrozza could put more emphasis on the 100 free instead of the 200 back or the 200 fly (or could perhaps pull a John Shebat and find themselves on the 400 free relay even without a new focus). Luke Hobson could continue his Townley Haas impression and switch from the 1650 to the 100 free this season. He has a best time of 43.34 from high school, and given his massive improvements in other events last year, and his 49.59 LCM time, it seems like he should be able to go at least 42-low-to-mid on a relay start.

So again, there’s plenty of possibilities for the Longhorns, and it’s a safe bet that the Texas coaches will figure out some way to plug the relay gaps, with or without Krueger. But, as the old adage goes, “a bird in the hand is worth two in the bush,” and as the Longhorns look towards what promises to be another close battle with the Bears next month, having another proven NCAA-scoring sprinter or two definitely wouldn’t hurt.

Did Texas pay for this want ad?

Yup, I was doing my pre season research last few weeks and Texas will need to solve the 50/100 riddle to have a shot at beating Cal. Relays might end up “ok” but individual event scoring will be a problem.

On top of that you can expect the 800 relay to be very strong again, but schedule conflicts mean the individual 200 is a little weak.

Filipovic and Crosby may be important pieces in the relay puzzle. Also need Grimm to develop some scoring in the individual back and free

He can only swim 3 ind events!

Then there’s a 2 Back problem.

Cal for sure lost 4 super solid guys in Grieshop, Carr, Mefford, and Julian. Not sure about Hugo and Whitley. The guys mentioned are point scorers and good leaders. I think Cal took a much bigger hit, especially if Danny comes back. And Texas diving will be back with a vengeance next year.

No mention of foster in this article but I am confident he will be able to throw down a 41 split on a 100 free along with Carrozza and Hobson…the 50 may be a little to short for them.

I think Cal was sort of in this situation last year graduating Hoffer and a few relay pieces but they made it work with Lasco stepping up and a few impact freshman.

They still had Bjorn after Hoffer graduated, but Texas is relying on a potential fifth year swimmer to lead their sprint group.

Yeah that’s true but even on their other relays like the 800fr relay they used two freshman and a 5th year. My point is that programs filled with versatile top recruits will almost always find a way to make the relays work.

I think Carson could go a 41.9 flying start or even faster but if you want to win this relay or even be top 3 you need a few guys hitting 41.0 or faster (and 18’s on the 200 relay) and that’s the point of the article. Not that Texas doesn’t have depth. Tons of it. But the top line sprint talent isn’t there right now. The DQ and relay splits didn’t help either.

That is why you have transfer portal, something like reloading thru portal does not seems to be common place in swimming, maybe Wyatt should speak to Coach Sark about it…..

Swimming is a hyper-concentrated sport. It is very, very rare that an impact swimmer hits the portal (relative to sports like football, anyway), and of those who do, they concentrate in very, very few programs. Which is similar to recruiting. Athletes who are on a clear Olympic path will only consider very, very few programs. Yes, some of the other programs have turned out Olympians, but in almost every case (think Brooks Curry), that athlete was not an obvious Olympic-track athlete out of high school (look at Stanford women, for example).

I’m sure you’ve seen this stat, but for next season 58 out of the projected 131 starting QBs at FBS programs will be transfers. 44.3%.