NCAA Season Ramp Up: Which Meets to Pay Attention To This Week 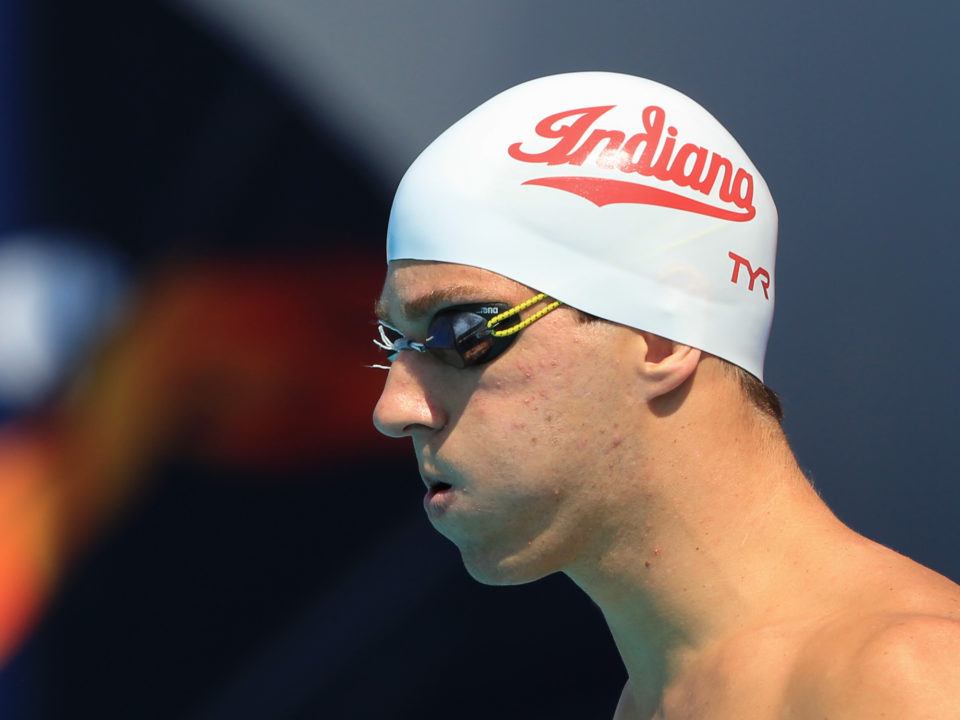 Zach Apple is set to make his IU debut this week as the Hoosiers host Kentucky, Mizzou, and Notre Dame in a quad clash. Archive photo via Tim Binning/TheSwimPictures.com

It’s October, so the NCAA swimming & diving season is getting into full swing. With over sixty meets going on across the country this week, zone in on a few big ones that should produce fast swimming, great races, and set the tone for how the 2018-19 season will progress.

Why you should pay attention: This is match-up featuring top programs from three different power conferences. Lilly King and Zach Apple are obvious ones to watch for IU, with Apple getting his start at IU after transferring from Auburn. Annie Ochitwa from Mizzou is one of the best sprinters in the country, while Asia Seidt and the Kentucky backstroke group is always fun to watch. ND continues to rise in an ACC that keeps getting tougher.

Why you should pay attention: Cal is the #2 team in the country on both the men’s and women’s sides. For their women, keep an eye on the backstroke, where All-American Amy Bilquist and highly-touted freshman Alex Sumner have yet to make a competitive splash for the bears. Andrew Seliskar had his breakout LCM summer and could impress in a range of events, and we’ll see what Reece Whitley can do after a very impressive NCAA debut last week.

Why you should pay attention: The Yuri Suguiyama-led Wisconsin Badgers kick off their Big Ten schedule against Minnesota, as two top teams on the Big Ten women’s side clash. Beata Nelson is looking to back up her huge sophomore season, while breaststroke star Lindsey Kozelsky and the seasonal stalwarts Minnesota will look to drop the Badgers in Madison. On the men’s side, something is brewing with the Gophers, or at least rumors about a fast 100 breast from freshman Max McHugh at their intrasquad would suggest as much.

Why you should pay attention: This is a fun Carolina crossover between ACC giant NC State and a fast-rising South Carolina team buoyed by an exceptional distance program on the men’s side and a valuable IM presence from Emma Barksdale on the women’s side. This is the first we’ll see of the NC State men, who will try to cope with Ryan Held’s graduation. For the women, sprinters Ky-lee Perry and Sirena Rowe are expected to suit up and could change the course of things for the Wolfpack women. Plus, with the huge success Louise Hansson has had in the NCAAs, we’ll see what little sister Sophie Hansson can do in her first yards meet.

Why you should pay attention: Stanford’s women were a bit sluggish against Utah today, but that doesn’t take away from fantastic outings from Ella Eastin and freshman Amalie Fackenthal (and they still dusted the Utes). We’ll see if they’re a bit more on their game against the Cougars, but in any case, this is the #1 team in the country, so of course you should be paying attention.

Why you should pay attention: Three ACC teams with something to prove will battle in Sergio Lopez’s new home pool. These are all teams trying hard to move up in the conference, and we’ll get a chance to see top 20 recruit Easop Lee in action for the Blue Devils.

Why you should pay attention: This is the UGA women’s first time out, and their #2-ranked freshman class will get its first chance to shine. Most intriguing will be to see if Eva Merrell is racing, as she has no logged times in the USA Swimming database since summer ’17. Arkansas quietly snagged Anna Hopkin, who won the 50 free at the 2017 British Summer Nationals, and she’ll have her first yards racing this weekend with good shots at some event wins.

Why you should pay attention: SMU will host women’s squads from USC, Virginia, Louisville, Iowa, and Miami (FL). Notably, ACC’s top two women’s teams, UVA and Louisville, will be racing with USC, one of the best teams in the Pac-12. We could have a barn burner if Mallory Comerford and Louise Hansson end up going head-to-head in the 100 and/or 200 free, but even if that doesn’t come to fruition, there will be a ton of fast swimming here. Teams generally suit up for this one, so fast means FAST.

The meet format is uniquely its own, with each team selecting eight swimmers and one diver to represent them throughout the two days. Swimmers are permitted three events per day, one of which must be a relay. Each team will field two swimmers per event, one swimming in the championship final and one in the consolation final. Relays will only have a championship final.

Why you should pay attention: Another cross-over, this one features OSU of the Big Ten, Louisville of the ACC, and Texas A&M of the SEC. While Louisville’s top women will be at the SMU Classic, the Aggie women are a team of interest as they are dealing with heavy 2018 graduations. The men’s meet will be great, too, as the Aggie men have one of the (if not the) best freshman classes they’ve ever had, and OSU freshman Ruslan Gaziev has already been making waves.

Nick Alexander for mizzou on the national team and doesn’t get a shout out?

Why would Louisville schedule two multiple team meets at the same time? Obviously they’ll get destroyed without their best swimmers.

Only two swimmers per event at the classic…

Probably because the team scores don’t count for much in these meets. Might as well get as many swims for as many of your swimmers as you can. It gives your third tier more experience against top talent. Swimmers who wouldn’t otherwise get to travel get to. The coach can see how the second tier swimmers handle pressure for relays. And helps the psyche of swimmers 9, 10, and 11.

I mean these meets matter, people care about the scores. Seems like you swam at IU, doubt people didn’t care about dual meet scores at IU

I’d also like to note the imminent domination that is about to occur when Gordon Wheeler touches the pool at the Zip Classic. Swim fans beware, this is a legend in the making.

Whats the rumor about the minnesota intrasquad?

Relax. also It seems that Stanford could use some sprint free… even if you use the 4 fastest splits from them Utah would have won that relay at the end. We know their distance crew can preform, time for the sprinters to step up.
On another note, great last swim from Utah in that relay. They always seem to get hyped for that relay.

Why do you just assume I’m talking about the men

Great to see so many cross-conference meets! Maybe these larger triple or quad duals will become more popular in future years…