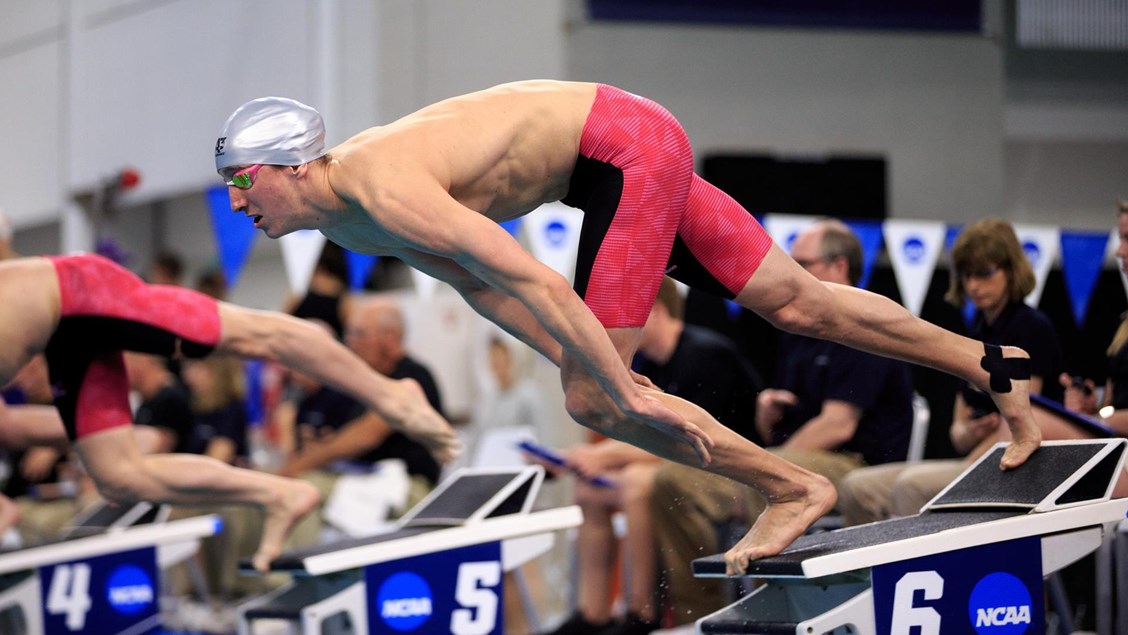 2019 NCAA Championships scorer Cameron Auchinachie, will use his 5th year of eligibility for Texas this fall after not competing for Denver last season. Archive photo via Denver Athletics

The Texas Longhorn men published their 2021-2022 roster yesterday, and there was at least one fairly big surprise: former University of Denver standout Cameron Auchinachie now appears on the defending champs’ roster as a grad student.

Those prelims times from 2019 remain his lifetime bests, but he matched his 19.13 in the fall of 2019 at the Big Al Invite. He didn’t swim any short course during the 2020-2021 season, ultimately dropping off the team roster after a huge percentage of the team was suspended for violating the school’s COVID-19 regulations. Last year was Auchinachie’s traditional senior year, but because he didn’t compete, this should be his final season of eligibility (athletes who didn’t compete last season don’t get the ‘extra’ year of eligibility afforded by the NCAA because of COVID).

Barring any additions to the Texas roster, Auchinachie and Alvin Jiang appear to be the only 5th years competing for the Longhorns this upcoming season. If Auchinachie can match his best times, he should help Texas out on the sprint free relays, where they’ll need to replace two legs on each relay.

While we reported yesterday that Texas A&M star Shaine Casas plans to transfer, possibly to Texas, he doesn’t appear on the Longhorns’ roster at this time.

Why does Casas not have to sit out a year?

This 👆🏼👆🏼👆🏼Is the million dollar question!

With the new NIL rules, it would be extremely easy for wealthy alumni to “sponsor” swimmers if they attended their alma mater. I wonder if any alumni would do that for a swim team, but maybe if they swam and are passionate, who knows…

That’s not what’s going on with Texas (I think people are just willing to spend the $ to be there, and swimming is a sport with a lot of rich families)

This is absolutely untrue.

i went into this on the Casas post but here’s where that puts Texas:

The rich get richer

Imagine being a 19.1 41.8 sprinter and potentially being the second most valuable transfer a team gets that year.

I think, with Casas, it’s a better team than that team for sure. Best ever? The 2015 team with peak Schooling, Will Licon, Jack Conger, Clark Smith was a pretty dang good team. The early 2000s teams were really good too.

Forgot about the early 2000’s teams, hard to beat a team that has Crocker/Hansen/Peirsol as the main trio. The 2015 team was really insane too, I’m thinking Casas/Jiang/Kibler/Foster^2 can match or surpass the point total set in 2015 by those guys. I just see more stars on this year’s team, but obviously we’ll have to wait and see how it’ll play out. Obviously depends on Casas and if he actually joins, since I don’t think it’s a sure thing yet, unless I’ve misunderstood something.

Conger, Haas, Licon, Schooling, Smith. If you can call him that, Licon was the sleeper, one of only a handful of people ever to have won 4 different events at NC’s

That 2015 team is the same team that put 6 guys in the A final of the 100 fly right? That’s still one of the most insane accomplishments any NCAA team has ever done – imagine being the 6th fastest flyer on your team but still making an NCAA A final. At any other school you’d be the star and likely be the flyer on every relay, but instead you’re the sixth fastest guy

I think because that team wasn’t loaded with Olympic medalists like the early 2000s team was, and because Schooling was such a long course flash-in-the-pan, it gets underrated, but evaluated purely as a college team, they were absolutely nasty.