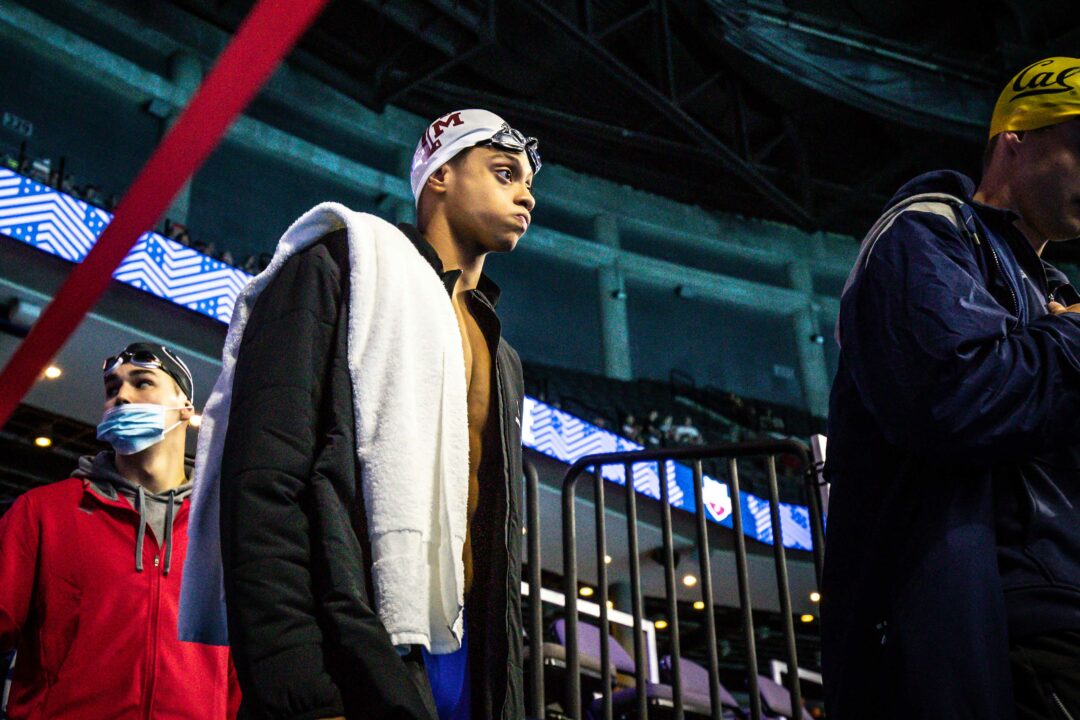 Arguably the best swimmer in the NCAA, Casas is leaving Texas A&M with plans to join the defending NCAA Champion Texas Longhorns as soon as this season. Archive photo via Jack Spitser/Spitser Photography

One of the best swimmers in the NCAA is on the hunt for a new team.

Shaine Casas, who won three titles at the 2021 Men’s NCAA Championships with the Texas A&M Aggies, informed teammates that he would be entering the transfer portal on Monday. A source later indicated that Casas is planning to join the University of Texas team with an eye toward both the remainder of his collegiate career and subsequent pro career.

The move would give the Longhorns, who have won five of the last six men’s NCAA team titles, arguably the most dominant swimmer in college swimming.

Casas has been a star throughout his three-year career in College Station but really elevated his game to a new level as a junior, sweeping his individual events at the NCAA Championships with victories in the men’s 100 backstroke, 200 backstroke and 200 individual medley. That made Casas one of just two swimmers to go three-for-three individually at the meet, with the other being Cal’s Ryan Hoffer, who graduated after last season.

The rising senior is also tied for sixth-fastest in history in the 50 back (20.61), which, although it’s not traditionally raced individually in collegiate competition, is another valuable asset potentially for the Longhorns on the 200 medley relay.

His 2020-21 collegiate season also included winning a pair of individual SEC titles in the men’s 200 back and 200 IM, adding a third-place finish in the 100 fly.

At the Art Adamson Invite in November, where he set what remain his lifetime best times in the 200 IM and 100 back, Casas dropped a 1:36.62 200 back from the ‘B’ final despite showing up in a walking boot earlier in the day.

After the conclusion of the 2020-2021 collegiate season, Casas was arrested for public intoxication in early May, just six weeks out of the U.S. Olympic Trials. Casas ended up finishing third in the men’s 100 backstroke at Trials in a time of 52.76, four one-hundredths shy of his best time and less than three-tenths outside of an Olympic berth. The McAllen, Texas native also placed sixth in the 200 back. He entered the meet as the 2nd seed in the 100 back and 3rd seed in the 200 back.

The owner of four individual SEC titles during his career, Casas’ move would not be considered intra-conference despite the fact that the University of Texas recently accepted an invitation to join the SEC. The Longhorns won’t officially join the conference until July 2025. Texas A&M and Texas were formerly conference foes in the Big 12 before the Aggies departed in 2012.

When Casas would become eligible to compete is unclear. The Longhorns and Aggies are scheduled to have a dual meet on October 15.

SwimSwam has reached out to Casas regarding the transfer, and he has said that he is not yet ready to comment publicly.

Is that really Shaine commenting in this thread? Declined to speak to Swim Swam but is will to inject snarky comments? If it is someone electing to use his name as a handle it is very unfortunate and you should stop immediately. It is definitely giving off less than stellar teammate vibe. Future teammates and coaches might take pause. Toxicity on a team can be contagious and completely ruin them. So stop trying to ruin Shaine before he even gets a second chance.

If it is Shaine please stop. I know you are feeling attacked. Take the high road. When less is said there is less to mend. All will pass eventually.

His comments were pretty benign. Saying he doesn’t care when internet warriors attack him… seems like taking the high road to me.

He declined because they approached him before he entered the transfer portal. He didn’t officially enter the portal until today.

if only Hoffer had come back for an extra year too 🤯

Congratulations to Shaine! He is a great kid, great talent and has been a good teammate of my swimmer. Why you all have to mention a ticket for drinking in this article is beyond me. Did none of you ever go to college and it is completely unnecessary to write about in this article. You all have turned a magazine less about swimming and more of the “People” magazine of swimming. Stick to the swimming.

Lol Anne doesn’t want us to know that her son Mark was with Shaine that night and left him in the gutter blacked out instead of helping him get home.

It’s totally swimming related. He was obviously not taking his approach to Trials very seriously – and it showed in his results.

Welcome to Austin, Shaine. You’ll find plenty of bars here, plenty of parties, and hopefully some focus to achieve your potential.

Anne – if in your mind it’s no big deal, why do you think it should be hidden?

Seems like you’re either acknowledging it’s a big deal, or that nobody should be mad about the world finding out.

Uhhhh sorry but is there anyone on earth who didn’t already know about this? It’s not like it’s breaking news.

Maybe this is why Eddie is back

Nah. Wyatt was and is ready. Texas AD on the other hand was not ready to have 3 new head coaches (bb, football, and swimming). Just my guess, no inside information here.

That makes absolutely no sense.

2 weeks Texas ago looked very strong but with big holes in fly/back. Then they bring in 2 guys with 44 in both strokes. That’s frustrating for all the teams who have to train somebody into their roster holes

Are you counting Jiang as one of these? Because Texas did train him into that roster hole. He was a 46.2 1Fly before coming to Texas.