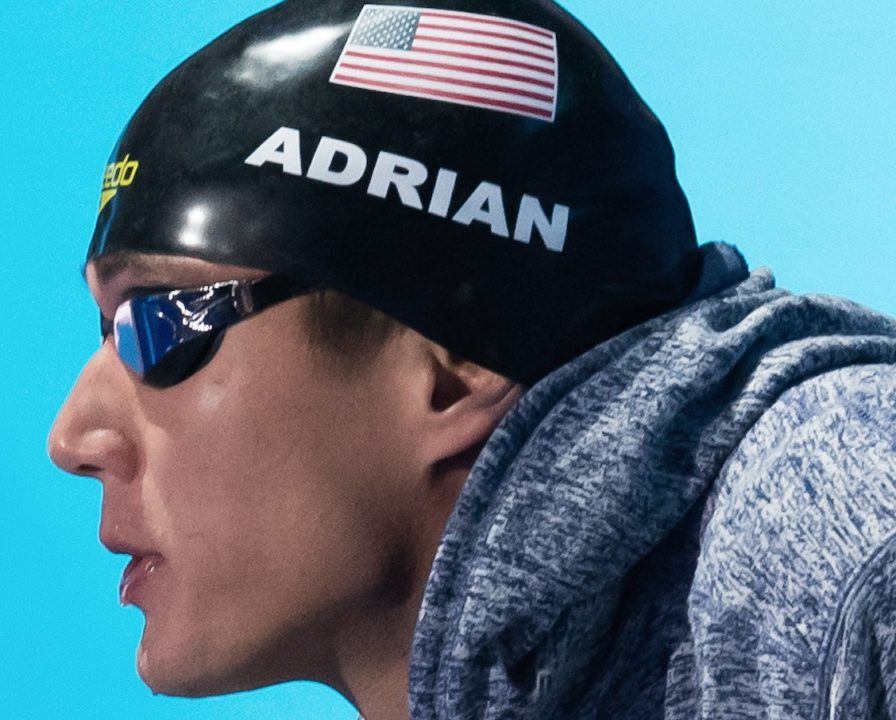 #1 class of 2022 recruit Baylor Nelson (above) and other SwimMac teammates, including Grace Rainey and Caleb Maldari, competed at a suited SwimMac only meet.

Adrian and Copeland, who are the owners of the AC Swim Club, will combine operations with the Westside Aquaducks, a USA Swimming team, on Wednesday. They’ll take over the program from retiring head coach Dea Ann, who founded the club in 2006.

As part of the transition, Adrian and Copeland will bring in Jon Hiett as the head coach of the Aquaducks. He spent the last 4 years as the head assistant coach with the Tualatin Hills Swim Club in Oregon, which is a USA Swimming silver medal club.

The swim school is located in San Rafael, California, while the Aquaducks train out of Petaluma, which is about 20 miles away.

Copeland retired from swimming after the 2012 Olympic Trials, but made a comeback for the 2016 meet, where he qualified for the finals of the 100 free and placed 7th – missing the Olympic Team by .34 seconds. He also lost a swimoff that would have earned him a place in the 50 free final as well.

Copeland won a medal at the 2011 Pan American Games as the leadoff leg on the silver-medal winning American 400 free relay.

As current owners of the AC Swim Club, Nathan Adrian and Will Copeland have expanded their involvement in swimming by taking over operations of the Westside Aquaducks, a USA Swimming team located in Petaluma, CA. The pair will bring in Jon Hiett as the head coach. Hiett will be joining the Aquaducks after 4 years as the head assistant coach with the Tualatin Hills Swim Club in Oregon, and will be filling the role left by Dea Ann Joslin, who started the club in 2006.

“Since the Olympic Trials, I’ve spent a lot of time in Petaluma getting to know the Aquaduck family. What Dea Ann has built is something special and we are going to continue to provide a safe place for young swimmers to pursue their dreams.” says Adrian. “From the minute we became involved with the Aquaducks, I knew Jon was the guy we wanted in the head coach position because of his successful coaching at every level. A huge thank you to Dea Ann, the current board members, and all of the team parents for trusting us with this responsibility.”

Joslin has been the head coach of the Westside Aquaducks since its inception.

An All-American swimmer in college, Joslin continued to pursue her passion by becoming the first person to solo swim the Maui Channel round trip. She was also the first woman to win the overall Golden Gate swim, has completed the bridge to bridge swim, the Alcatraz loop, and regularly swims the 9 mile length of Lake Sonoma. She currently plans to continue her involvement with the team by coaching the Silver Group.

Hiett brings a wealth of experience and knowledge of the sport to the Westside Aquaducks after spending decades with some of the top teams in the nation. His experience as a collegiate swimmer for two powerhouse teams (Auburn University & University of Michigan) makes him no stranger to elite athletes and coaches. During his All-American collegiate career, his coaching philosophy and expertise were formed by his experiences with David Marsh, Richard Quick, Brett Hawke, Mike Bottom, and Jon Urbanchek.

Hiett started his coaching career with KING Aquatic Club, where he remained for five years. He continued his coaching evolution by embracing a position with Tualatin Hills Swim Club. While with KING and THSC, Hiett coached athletes at all levels of the sport, including many National Age Group Records holders and several Olympic Trials qualifiers. The influence on his teams is evidenced through the accumulation of team championships, and the achievement of Gold and Silver Medal Clubs statuses.

“I am beyond excited to be joining a team with so much potential and an already strong foundation. The support and enthusiasm shown by Dea Ann, the current coaching staff, and the Aquaduck families amplify my excitement for our team’s future. I am extremely grateful for this opportunity from Nathan and Will and for their belief in me and my coaching. I look forward to seeing what we can accomplish together.”

Is this an indication that Adrian is done competing?

He has always been a competitor and will never be done competing.

Or an indication he now has an extra mouth to feed?

This is no way a knock at Adrian, just something I learned recently that boggles my mind. Adrian is known as one of the best American sprinters ever. Michael Phelps has a fast 100 free that Adrian. Blows my mind just how far up and down Phelps could swim.

Congrats to the Golden Bears! 🐻

Brings a big smile to my face. I think people will be real lucky to be involved with this swim club.