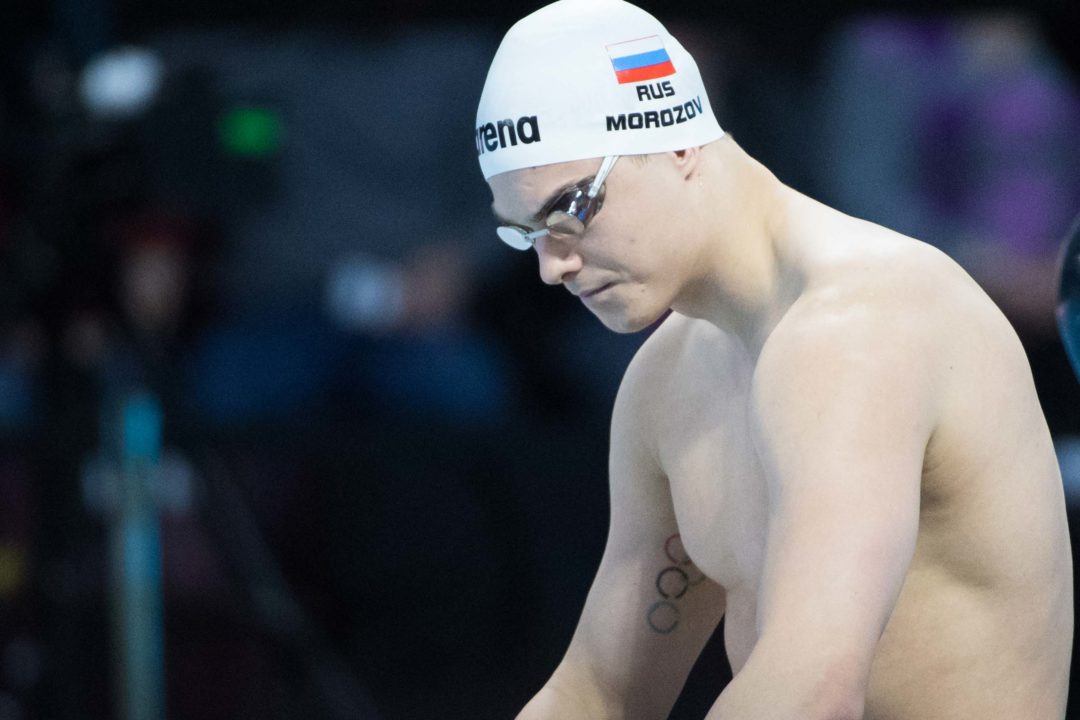 It's not often we see a swimmer dominate the 50 free by close to a full second, but Morozov did just that at this meet. Archive photo via Mike Lewis/Ola Vista Photography

Trojan Swim Club’s Vlad Morozov, a former NCAA champion for USC, got the ball rolling with a speedy 50 free. It’s not often we see a swimmer dominate the 50 free by close to a full second, but Morozov did just that at this meet. His 21.91 was good for gold, as he finished 8 tenths ahead of club teammate Cristian Quintero (22.71).

After taking 2nd in the 50 free, Quintero picked up another victory for the Trojans at the end of the session, showing off his range with a victory in the 400 free. He led the race from start to finish, touching in 3:55.68 ahead of Cal’s Nick Norman (3:57.32).

The Cal Golden Bears also brought in a pair of wins on night 2. After winning the 400 free last night, Katie McLaughlin completed her middle distance free sweep tonight, putting up a 1:59.63 in the 200 free to beat teammate Amy Bilquist (2:00.52). Later in the session, Bilquist bounced back, giving the Bears another win with her 2:12.56 in the 200 back.

Hmm, that 58 from Amanda Kendall is noteworthy. After Worrel, there is no clear favorite for second

My dream is Mallory – Leah – Katie – Katie with the world record. Despite Simone Manuel fits this picture as well I’d rather to not have her at this relay. She has very tough task to prove at individual races at 100 and 50 free. Media is pushing her making the failure to medal at these distances at WC as an indicator that Olympic gold medal was just a lucky accident. A lot of pressure. I’m not sure she will risk her individual races by swimming at 100% of her capacity the relay race. I’m still puzzled with her 53.36 relay time that followed by gold 52.7 in a few days in Rio. Her exceptional leadoff performance could easily… Read more »

Prove? Simone has nothing to prove. If she stopped swimming tomorrow, she already has 2 gold and 2 silver medals at age 20. She’s still a kid. She probably won’t even peak until 2024.

If she’s achieved already her swimming career goals in the competition where other contenders with superior personal bests significantly underperformed due to different circumstances then I agree with you – she has nothing to prove. It isn’t even necessary to be at least one more time under 53 sec.
I think Simone would be flattered by your opinion but would disagree that she has nothing to prove. Her immediate genuine reaction on the result of the race explicitly says that it wasn’t expected. This 52.7 result stays far away from everything she has ever swum. If she doesn’t better it or at least shows something near to it she will be remembered as a swimmer of one lucky race.

One lucky race can happen at worlds or continental championships. If it happens at the Olympics it’s always just called a gold medal.

Nobody argues with that. The luck is important part of sport competition. In a short time after Olympic Games nobody remembers who a silver medalist was or how and with what time the gold medal was won.
Does it matter for Maya Dirado that she was two seconds (at 200 !! ) slower than Missy Franklin in London? Not at all.
But this particular race is different. It is remembered first of all as missive failure of leading contenders.
52.7 is an exceptional result. It is very close to the best ever times with the exception of Cate Cate Campbell’s and rubber suite races. In the case of Penny Oleksiak nobody has doubts that she will be… Read more »

I think she is still off form slightly from 2015 worlds. She needs to find one more gear to make an impact.

Why does Abbey Weitzeil swim 200 free at any meet? Hasn’t she had enough of it in college? Or that is a part of her training exercise to make her a faster sprinter? Or she wants to challenge Cate Campbell or Simone Manuel at everything they are swimming? Interesting.

Swimmers train the 200 for their 100. Notice in every training meet Simone Manuel and Caeleb Dressel are always entered in the 200 free. That’s why they can come home like a freight train. ?

Oh, that’s why! Abbey wants to be like a freight train.
Somebody has immediately to notify Sarah Sjostrom of what she is missing. She with her new coach are so naive in believing that one thing excludes other: either sprint or 200. Chooh-chooh-chooh, tooh-tooh!!! (or whatever freight train speaks in English 🙂 ) Come back Sarah to 200. Tooh-tooh!!!!!!!! 🙂