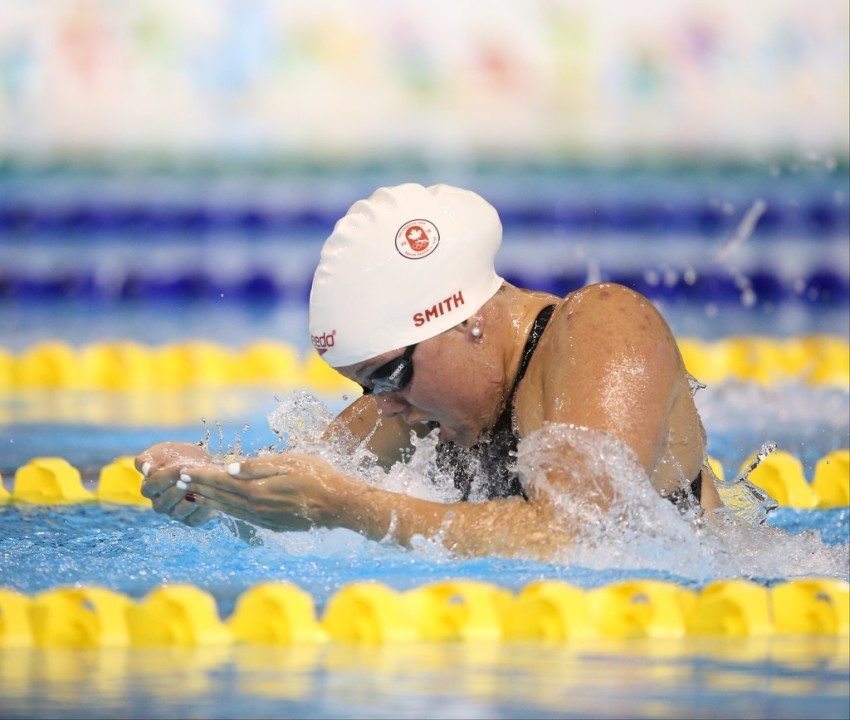 Kierra Smith coasted to a win in the women's 200 breast at the Mel Zajac International meet in 2:25.25. Archive photo via Chris Tanouye

Day 2 of the Mel Zajac Jr. International wrapped up tonight, with plenty of exciting races taking place. The meet features many of Canada’s best, including some of their World Championship squad, along with the U.S. Junior team that has performed well so far.

The 200 breaststroke was the last individual event of the night, and there were two very notable names at the top of the podium.

As she predicted, Kierra Smith came away with a win in the women’s 200 breast, and a decisive one at that. Smith clocked an impressive 2:25.25, less than a second off her season best of 2:24.36 that ranks 12th in the world. Coming in over six seconds back for 2nd was Erika Seltenreich-Hodgson in 2:31.59.

The men’s 50 free featured a battle between Canadian Olympian Yuri Kisil and US Olympic Trials finalist Dillon Virva. Kisil got to the wall 1st in 22.69, with Virva 2nd in 22.85. Kyle Robrock from the University of Denver took 3rd in 23.10. In the women’s event American junior Katherine Douglass cleared the field easily in 25.56, followed by Robrock’s German teammate Johanna Roas (26.04).

The women’s 200 IM was arguably the most exciting race of the night, with Island Swimming’s Sarah Darcel emerging in 2:15.27. Darcel, who swam three finals on the night, was run down by Kelsey Wog on the breaststroke leg before holding her off in the freestyle. Wog touched 2nd in 2:15.63, and 2016 Olympic bronze medalist Hilary Caldwell took 3rd in 2:16.62 after leading at the 100m mark.

2:25.2 is and impressive in-season swim for Smith. She was 2:25.96 I’m Atlanta a few weeks ago. I’ve also been very impressed with Who at this meet. She seems to have bounced back after a rough trials. Her 100 brst was around half a second faster than it was at nats. Her 200 im was a lifetime best by well over a second, and she finished in the top 5 I’m the 50 free and 50 fly. Excited for Her 50 brst. Also disappointed she didn’t swim the 200.

Also thought Caldwell and Nicol would be faster here, but Thormeyer and Dunk seem to be swimming fairly well

Smith also topped the 2:25.65 meet record held by Annamay Pierse, who held the world record in the 200m breast from 2009 to 2012. Who was the last Canadian before Pierse to hold a long course world record? Was it Allison Higson in the 200 breast in 1988? While looking, I found this interesting article on her. She was coached by Paul Bergen, and when she broke the world record in 1988 at 15, she swam her first 100 meters faster than any US girl had ever swam 100m breast save Tracy Caulkins, who was also coached by Bergen, and still held the American record in the event at the time.
http://articles.latimes.com/1988-07-17/sports/sp-9826_1_100-meter-breaststroke