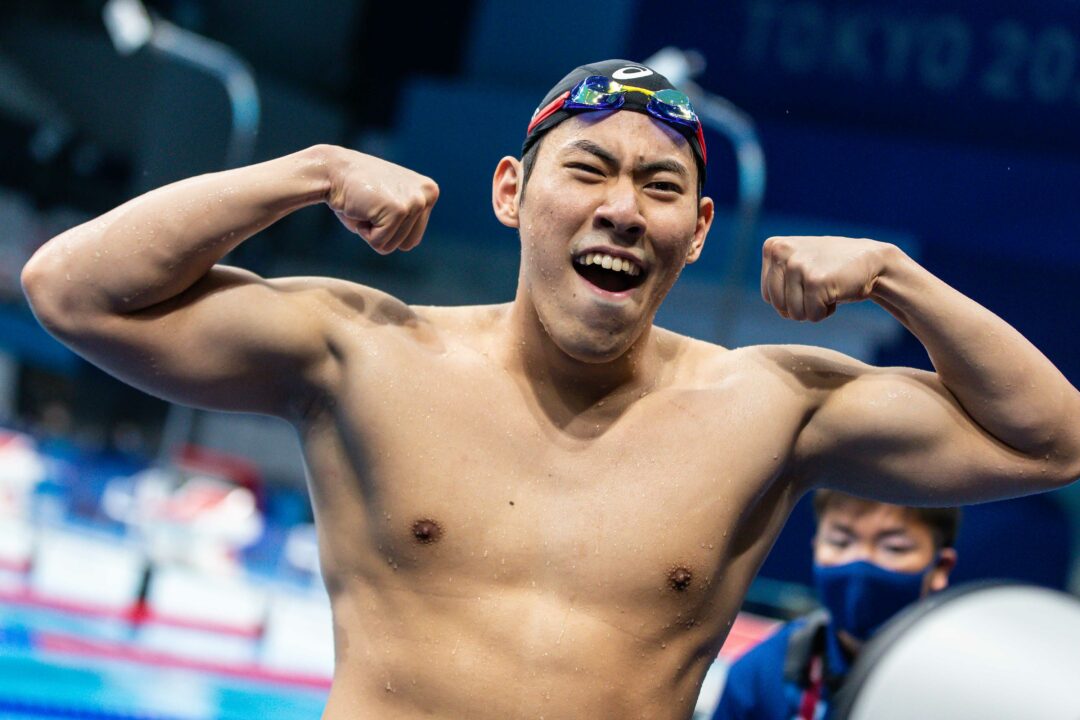 200m fly silver medalist from the 2020 Olympic Games, Tomoru Honda, got the better of Daiya Seto in the men's 400m Im in Tokyo tonight. Archive photo via Jack Spitser/Spitser Photography

We reported how Olympian Reona Aoki already wreaked major havoc on day one of this Japanese Selection Meet in Tokyo, however, there were several other notable swims that lit the Tatsumi pool on fire.

First, for Aoki, the 27-year-old notched a new Japanese national and Asian continental record in the women’s 100m breast, firing off a monster 1:05.19. You can read more about her performance here.

Miyu Namba was another top performer on the women’s side, with the 19-year-old World Junior Championships silver medalist nearly knocking down the nation’s record in the 400m free.

Entering this meet, Namba’s personal best in this event rested at the 4:06.36 she produced at last year’s Olympic Trials. In Tokyo, she wound up clocking a disappointing 4:13.29 to place 20th, well out of the final.

As such, her time here knocked over a second off of her lifetime best, rendering her as Japan’s #2 performer all-time and the 10th fastest Asian woman ever in the event.

Both Namba and runner-up Waka Kobori (4:06.54) dipped under the threshold needed for Budapest 2022.

Leukemia survivor Rikako Ikee was in the water tonight as well, but she settled for silver in the 50m fly. Hitting the wall in 25.78, Ikee was beaten by only .02 with Ai Soma topping the podium in 25.76.

In the men’s 400m IM battle, 200m fly Olympic silver medalist Tomoru Honda got the better of Daiya Seto, but not by much.

Seto, who came down with COVID earlier this year, dropped nearly 5 seconds off of the 4:15.86 he produced in February. Both men easily cleared the 4:14.20 mandatory qualification time needed for Budapest.

Two men got under the 49-second threshold in the 100m free, led by Katsuo Matsumoto. Matsumoto touched in 48.57, nearly a best time. His outing here fell just .20 outside of the 48.37 he put up at last April’s Olympic Trials.

Settling for silver in the 100m free tonight was racing mainstay and national record holder Katsumi Nakamura. He notched a time of 48.90, comprised of 23.50/25.40.

A mark of 48.13 was set forth by the Japanese Swimming Federation (JASF) for Budapest qualification so we’ll have to see if they select discretionarily.

I was convinced that God Honda could go in the first half of 1.53 seconds at 200m Butterfly.

That is a very impressive 450m fly by Mizunuma

A 4:10 is definitely not washed lmfao

im guessing you forgot his performance at sc worlds. or maybe the fact that the winning time at the olympics was like 4.09.xx, if my math(s) is correct, there isn’t that much difference between those times and what seto has put up here. If a swimmer is washed because he loses in a 400m race by less than 1/10th of a second, then you need to take a deep breath. Your comment also implies that Honda is also somewhat of an underdog, did you also forget his performance in the 200 fly at the olympics? He is far from an underdog and just because he beat seto by a tiniest of margins, does not mean seto is washed. Sorry for… Read more »

Idk if I missed it but did Ikee’s time qualify her?

Simce Honda beat Seto in 400 IM, there’s no reason to think he won’t beat him again in 200 fly. Seto hasn’t won a 200 fly over Honda for some time. The change of guard is happening (or has happened.)

It was an extremely small difference and considering seto has been training in a hotel until mid February while he had covid, I think he’s in a decent spot. Not too sure what Honda’s condition has been over the last few months but I think it’s a bit too soon to say the change of guard is happening

idk, if you were to predict the outcom based off last year’s LC performance, Honda should time-wise win. However, you can’t discredit what seto has accomplished coming back, but then again he also contracted covid early-mid february I believe and was training in a hotel up until konami open. He managed to pretty much tie with honda in the 400IM, so it could go either way