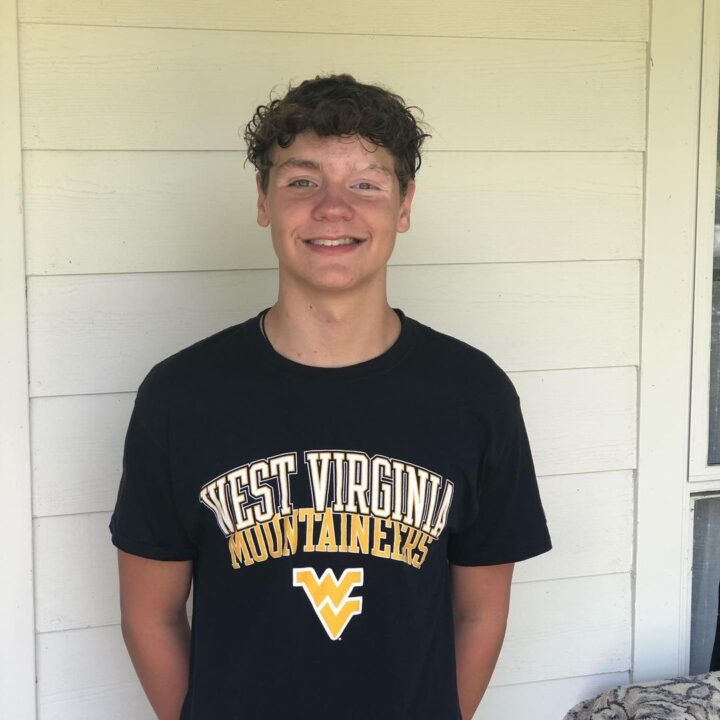 Simpson will have a shot at making Mountaineer relays in his first year after arriving in Morgantown in the fall of 2022.

A multiple-time state champion in Mississippi, Christian Simpson has announced his college decision, electing to spend the next four years competing for West Virginia University. Simpson is currently in his senior year at Tupelo High School and currently swims club for Shockwave Aquatics.

Earlier this fall, Simpson secured a pair of victories at the Mississippi Class 2 High School State Championship meet. The senior easily cruised to wins in both the 200 free and 200 IM, topping the field in each by multiple seconds. In the 200 free,  he stopped the clock at 1:39.91, well ahead of second place Matthew Brian’s time of 1:46.60. His 200 IM performance was just as dominant, with his time of 1:54.47 being one of just two swims to dip below 2:00.

As both a sophomore and junior, Simpson picked up a single win at the State meet. In his sophomore year he topped the field in the 100 back while a year later he claimed the title in the 200 free. Including his two runner-up finishes as a freshman, Simpson has never finished outside of the top-two.

Back in the spring of 2020, Simpson swept the Mississippi Swimming Short Course Championships, finishing in first in all seven of his events. He has since dropped time in all seven of those races.

The addition of Simpson will provide the Mountaineers with quality depth across numerous events next season. His biggest contribution will come in the 200 free, where he would have been the team’s fourth fastest last season. He’ll also be among the team’s best in the 200 back, with his time being just off two seconds behind Justin Heimes 1:46.92 that lead the team in 2020-2021. Heimes was only a freshman last season, meaning Simpson will have two years to train alongside him when he arrives on campus next fall.

Due to the limited number of team’s in the Big-12, swimmers are guaranteed second swim. In the 200 back, only eight non-exibition men contested the event last season, meaning all athletes raced in the A-final at night. Simpson’s best time in the event would have put him 7th, just ahead of teammate Philip Kay. Heimes took 4th in the event.

While the West Virginia men finished third at the Big-12 Conference Championships in 2021, the meet will look very difference in the coming years. Earlier this year, the University of Texas elected to not renew their media rights with the conference, seemingly indicating that they intend to leave following the 2025 expiration date. While the school has yet to apply for membership elsewhere, if they were to leave, it would leave just TCU and WVU as members of the conference by Simpson’s senior year.