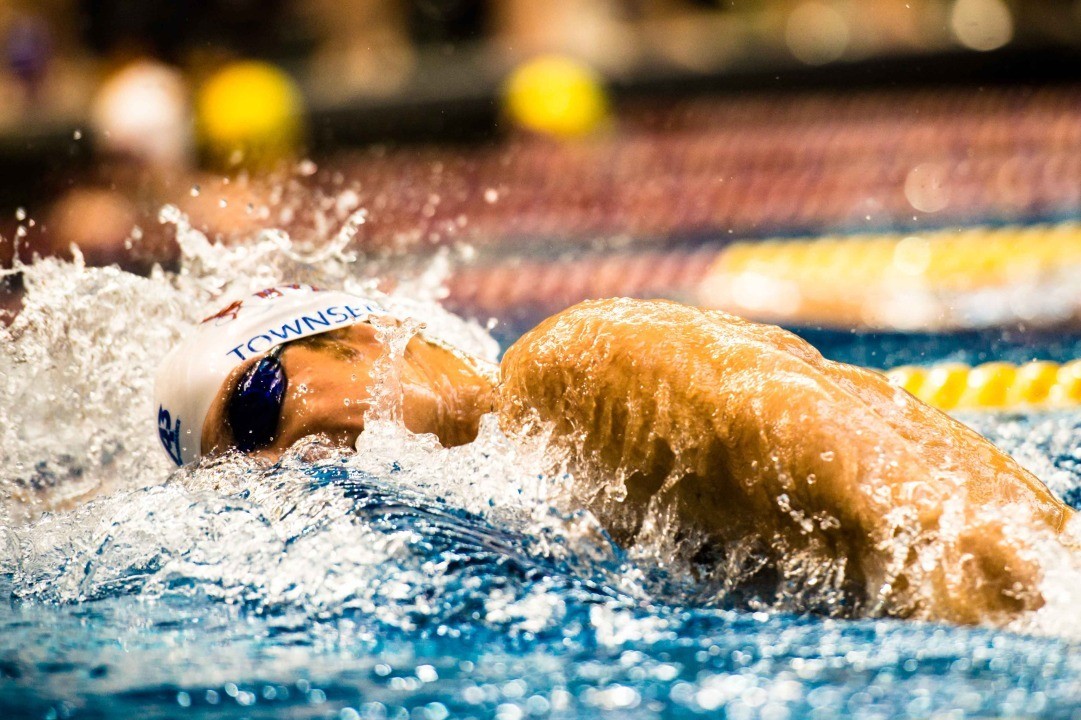 American record-holder Nathan Adrian clocked an astounding 18.83 to win the 50 free final on Day Two of the Minneapolis Grand Prix.

University of Minnesota teammates Madeline Hoch and Jessica Plant led the field in the B-final of the women’s 200 free. Hoch was out in 52.0 to Plant’s 52.2; the pair of Golden Gophers continued to trade stroke for stroke through to the finish. Hoch got to the wall first in 1:46.52, Plant was 1:46.62, and their teammate Lauren Votava was third in 1:46.94.

Top-seeded Shannon Vreeland of Athens Bulldogs led the championship heat, with Hurricanes’ Katie Hoff right on her hip. Vreeland was out in 50.7; Hoff in 50.99. Then Elizabeth Beisel made her way into the mix and began to challenge Vreeland for the lead. Vreeland picked up her tempo and won in 1:43.57. Beisel touched second in 1:43.91, while Hoff was third with 1:44.46.

North Baltimore Aquatic Club’s Conor Dwyer led the championship final from start to finish. He had a body length lead by halfway. Darian Townsend hung with him through the 150 or so, before California Aquatics’ Nathan Adrian and SwimMAC’s Tyler Clary moved into position. At the end it was Dwyer in 1:33.69, Adrian with 1:34.87, and Clary with 1:34.97. Great early-season swims all around.

Justine Bowker of T2 Aquatics led start to finish in the consolation final of the women’s 100 breast. She touched with a comfortable lead in 1:01.63. Second place went to Rae Bullinger of Minnesota with 1:02.83. Anna Belousova of Asphalt Green was third in 1:03.01.

The championship final was never really in question, as Melanie Margalis was in control of the race from the beginning. Margalis was out in 27.61, having built up quite a lead already. She finished in 58.64 with a really solid swim. Hilda Luthersdottir, a Florida post-grad, was second with a lifetime best of 59.40, while Kierra Smith of Minnesota touched third in 59.68.

Brazilian Felipe Lima is making good work in his short time since changing training grounds to Auburn by winning the men’s 100 yard breaststroke in 52.64. While that program is best known for its sprint freestylers, and to a lesser extent butterfliers, Lima so far is providing good evidence that they can train breaststrokers as well.

Lima beat out American Mike Alexandrov (52.64) and Purdue senior Lyam Dias (52.81) for the win. Dias was the top collegiate finisher, and his time should be good enough to send him back to NCAA’s for the third-straight season.

BJ Johnson took 4th in 52.92, Carlos Almeida was 5th in 53.18, and Marat Amaltdinov was 6th in 54.15 – he’s also at Purdue, though just a freshman. The Boilermakers had the two highest-placing NCAA athletes in this race.

Matthew Anderson was the fastest high school finisher in 54.27, and Michael Andrew rounded out the top 8 in 55.38.

Coming off of a state championship in Wisconsin last weekend, 16-year old Beata Nelson traded in her Verona High gear for her Southwest Aquatic Team uni and proceeded to break another National Age Group Record.

Nelson won the race in 51.08, which was both well clear of the 51.70 she did last week in Madison, and the 52.27 that National Teamer Katie McLaughlin swam for 2nd place. McLaughlin held this National Age Group Record until Nelson broke it last weekend.

Minnesota freshman Danielle Nack took 3rd in 53.06. She’s used to swimming fast this time of year – her two fastest times ever came in November and December, respectively – so that swim is of no surprise. It’s probably just a hair short of what she’ll need to qualify for NCAA’s, however, so we may see an exhibition swim from her later in the meet. Either way, she’s part of a very good Minnesota freshman class that gives this program confidence going toward the future even after graduating a big senior class this season.

Nack’s teammates Becca Weiland and Tori Simenec, both part of that impressive senior class, took the 4th and 5th places in 53.14 and 53.26, respectively.

Lisa Boyce, who is a graduate of Princeton currently training with Longhorn Aquatics, took 6th in 53.97.

Winning the B-Final from the Mitchell Aquatic Club in South Dakota was 16-year old Tevyn Waddell in 53.96. That’s an exciting new name to watch out of a state that’s not necessarily a swimming hotbed (though it’s where Michael Andrew got his start). Her best time coming into the meet was 55.74, and she now ranks 76th on the all-time age group rankings for 15-16’s.

Miguel Ortiz has been competing everywhere in the world in the last few months, it seems, which is fitting of his lineage tying him to Japan, Spain, and Brazil. Ultimately, though, the former Michigan Wolverine and current Club Wolverine post-grad made his way back to the United States and swam an electric 45.28 to win the 100 fly.

That’s a new lifetime best for him, which leaves some disappointment as he’s not one of just four swimmers that Spain is sending to Short Course Worlds.

The top collegiate swimmer was again a Gopher, as Daryl Turner took 5th in 47.10.That’s a good setup swim for his primary race, the 100 back, on Friday. Turner hadn’t been faster than 47.8 coming into this meet in the 100 fly.

The best battle of the night came in the men’s 400 IM, where SwimMAC’s Tyler Clary and the defending Minneapolis Grand Prix Conor Dwyer dueled center-stage for victory and a big cash prize. Last year, Dwyer won this race by six seconds. This year, with Clary entered, the race was much more competitive,

Clary opened up a lead on Dwyer on the backstroke, where the former split 55.8 to the latter’s 56.9. That stroke is Dwyer’s biggest weakness on the IM, and Clary took advantage. Dwyer, however, made his move, as expected, on the breaststroke, where he picked up a full second on Clary.

Rounding out the top 5 finishers was Texas commit Ryan Harty in 3:51.00 – the fastest high schooler in the field.

Typically, relays at Grand Prix meets are just an opportunity for teams to get an extra swim in for their athletes, but with NCAA qualifications in play, we’ll give them a little more attention here in Minneapolis.

Specifically, the Minnesota A relay of Lauren Votava (49.81), Becca Weiland (49.49), Jessica Plant (50.02), and Tori Simenec (49.51) combined for a 3:18.83. That missed both the qualification (“A”) and provisional (“B”) standards for the NCAA Championships, implying that the Gophers are lining their season out to go fast enough at Big Tens to earn most of their qualifications. By comparison, they were 3:17.5 last season at this meet with a relay just one-swimmer different.

Former Gopher Derek Toomey, now representing the Badger Swim Club out of New York, led off his third-place relay in 43.73.

Congratulations to 14yr old Iowa City West High School freshman Ruby Martin of IFLY/IA for swimming with the Olympians and national swimmers and finishing 6th in the Women 400IM at the 2014 Arena Grand Prix in Minneapolis MN..
She has already qualified to swim in the 2016 Olympic Swim Trials in 4 events..

There have been several comments about how “slow” Michael Andrews has been. I made several comments last year when folks were saying his times as an age grouper meant he would win 102 world championship medals and 34 Olympic golds that while impressive he may have just matured earlier. That being said, I am going to flip it here. I don’t think he has swum very slow here. In fact, compared to where he was last year at this time, he is substantially ahead of that pace. Even though he seemed to break a record every time he got in the pool last year, he made substantial progress from the beginning of the season to the end of the season.… Read more »

Almost nobody to comment live when I’m not here. 🙁
I will be here for the last 2 days.

I didn’t watch races yet so hard to comment something we didn’t watch but based on the results, I would say that:
– as expected Miss Beisel is the clear favorite for the car on the women’s side.
– as expected, it will be probably a Dwyer/Clary battle on the… Read more »

I meant to say Is Michael Andrew the Freddy Adu of swimming? I guess we’ll see in a few years time.

Michael Andrew is the Freddy Adu of swimming

Surprised that Michael Andrew swam the 400IM, but his times seem to have leveled off for the time being. The 100Fly and 100Breast finals were slower than his morning times as well. Would be curious if he’s changed his training up at all? Maybe he’s doing more yardage now and broken down a little? That 400IM time for him was pretty slow. He was faster than that at age 13.

It’d be super cool if the live results worked. I like to look at the splits for each swimmer and how the B, C, and D finals turned out.

You sir/ma’am are correct, I was told it was a 4:28 and in the ensuing excitement i posted without checking first. I am unworthy to call myself a swim nerd.

Your enthusiasm makes you a bona fide champion and true swim fan/nerd! 🙂