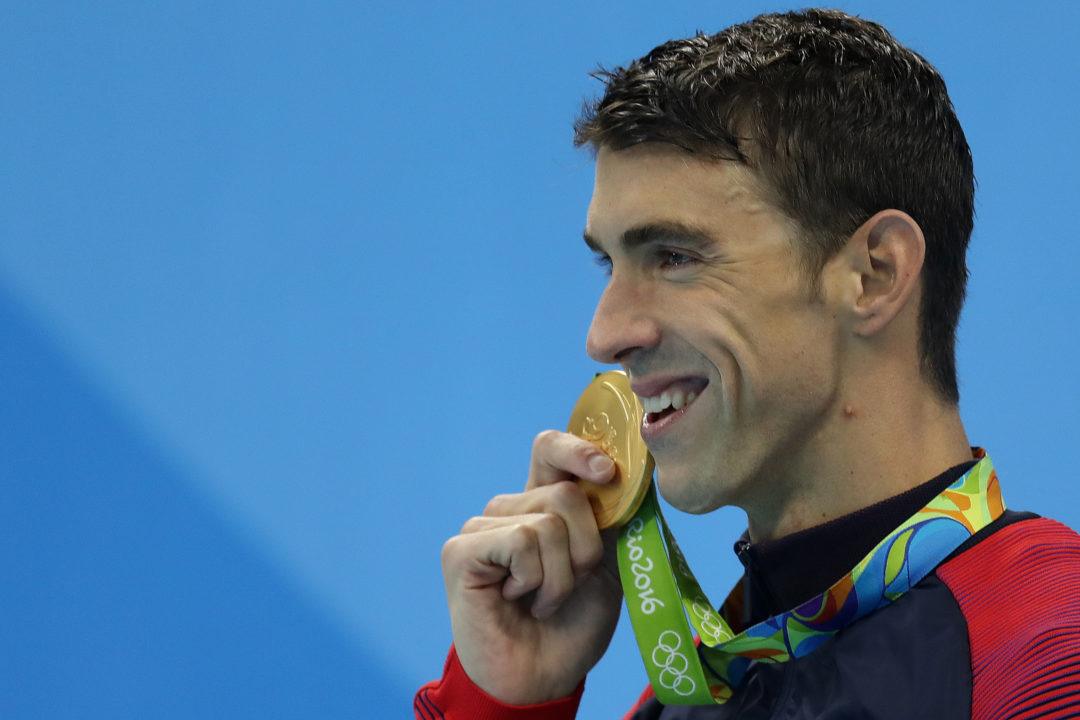 In a profile in the Baltimore Sun, Olympic hero Michael Phelps says he's in better shape now than he was before his 2014 comeback from retirement, but quashed any speculation about a second comeback. Archive photo via Satiro Sodre/SS Press

In a profile in the Baltimore Sun, Olympic hero Michael Phelps says he’s in better shape now than he was before his 2014 comeback from retirement, but soundly stifled any speculation about a second comeback.

Phelps, now 33 and retired exactly two years as of today, said he’s stayed in much better shape than he did after his first retirement following the 2012 Olympics. The Sun profile says he’s “obsessed with riding his Peloton exercise bike” and that he’s stayed at the same weight he swam at in Rio. Phelps admitted that physically, a comeback would be easier this time around – but insisted that he’s not interested in the grind of returning to pool training at his previous levels.

“It would be a lot easier for me to come back than it was for the last one, just because of me being in so much better shape now,” he said in the Sun piece. “But I have zero goals to make me want to go through that grind again.”

Phelps joked that longtime coach Bob Bowman has tried to coax him out of retirement, but Bowman said he’s supported his famous pupil in retirement.

“Did he say I want him to swim? I don’t think I really do,” Bowman said later in the profile. “There’s a delicious irony in the fact that because he’s been on Peloton and takes care of himself really well, he’s in way better shape than he was when he came back in 2013. And I see him swim, you see the stroke and it’s like, ‘Wow, that’s not really too bad.’ But no, I definitely do not want him to have to go through all that.”

The profile serves to quell what is almost inevitable comeback speculation at the end of every season of American swimming. This time around, it’s perhaps even more inevitable for fans to toss around the idea, given that Phelps has already returned from retirement once along with the fact that the first rumblings of that comeback started with some lackluster relay performances by the Phelps-less American men.

In July 2013, Phelps had been retired for about a year following the London Olympics. NBC pulled in the swimming icon for an on-air interview during the 2013 World Championships, where the U.S. men watched France erase a lead and chase them down for gold in the 4×100 free relay for the second-straight year. It also extended the U.S. men’s gold medal drought in that event at World and Olympic meets to three years (2011 Worlds, 2012 Olympics, 2013 Worlds).

A visibly frustrated Phelps told Rowdy Gaines on-air that he wished he’d been on that relay. Thus started a cycle of speculation over a Phelps comeback, speculation that ultimately paid off when Phelps re-entered the USADA testing pool in November and returned to competition in early 2014. Phelps would come back and win just two individual golds at the 2016 Rio Olympics, but swam key legs on all three relays, leading to an American sweep of the men’s relay golds.

But that was 2013. It’s now 2018, and the Americans aren’t coming off an international performance that was widely disappointing, particularly due to some egregious flubs in the relay events, men’s relays in particular. Er… aren’t they?

The timing, then, of Phelps statements this week are extra important. The 23-time Olympic champ has been particularly adamant that this retirement is for good. The Sun profile does note that Phelps’ occasional swims at Arizona State are anything but casual, reporting that he “often asks Bowman to time him,” and that he ended up competing against Australian Olympian Grant Hackett when Hackett was in town. But that’s perhaps to be expected from a swimmer whose legendary competitive spirit isn’t likely to go completely dormant, even in a for-good retirement.

Phelps remains steadfast that his competitive career is over, that he’s on to new and bigger challenges.

“The medals were a part of changing the sport. It was a steppingstone to changing the sport,” Phelps says at the end of the profile. “I still have that journey, but I’m now trying to conquer a bigger, more powerful, more exciting mountain. Doing something that no one had ever done before in the pool, we’ve done it. So now it’s, ‘What’s next?’ ”

You can read the full Baltimore Sun profile, where Phelps and Bowman share lots of fun details about the iconic moments of Phelps career, here.

CD will break that world record.

Never count Phelps out. ….But Caeleb will take100 Fly to a new dimension…..

Funny how Bob likes to pass his texts off as “jokes”

Shame on swimswam for letting this person continue to post this.

It would be amazing to see him race again, but he’s accomplished such a ridiculous amount in the sport and dedicated so much time to it that – as he said himself, he doesn’t want to go through that grind again.

Well he would make so much money off of It yet again. Through sponsors as well as his MP brand…!

No point. Even though he’s used some money to upstart MP foundation, he and his wife will never need to work again.