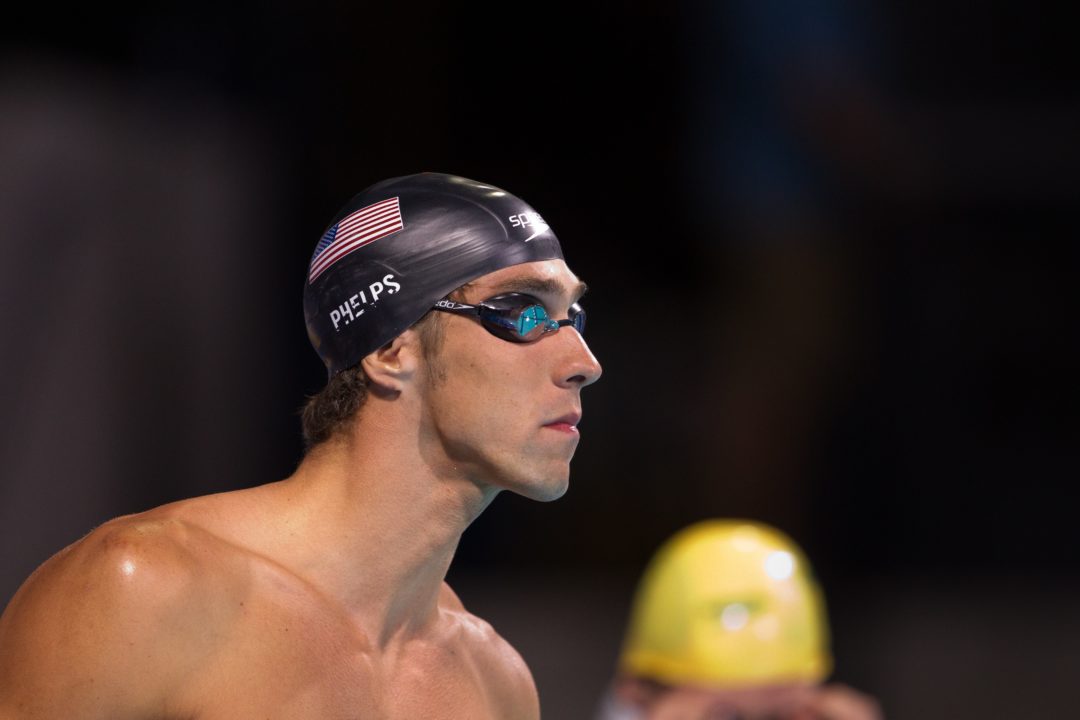 Michael Phelps is targeting the 2014 Mesa Grand Prix as his return to competitive swimming. Archive photo via Tim Binning/TheSwimPictures.com

In a press release today announcing the headliners for the Mesa Grand Prix in Mesa, Arizona from April 24th-26th, USA Swimming has confirmed the intent of Michael Phelps return to competition, to swim his first meet since the 2012 Olympics.

This had been the rumored comeback meet for the last couple of months (after another opportunity to race sooner fell through), as Mel Stewart has hinted at several times here on SwimSwam, but this release is the first confirmation by USA Swimming or anybody on-the-record that the comeback is happening.

There are no psych sheets yet to know exactly what Phelps is swimming, but his coach Bob Bowman implied recently in a USA Today article that it will be a light schedule, and will test his speed more than his endurance. A good guess would be something like a 50 free/100 free/100 fly schedule.

That will make this the deepest Grand Prix field that we’ve seen so far this season. All of the biggest names are in attendance, as are some local stars like defending CSCAA NCAA Swimmer of the Year Kevin Cordes, and Arizona native Caitlin Leverenz.

Phelps will grab almost all of the attention at this meet, but there will be some other good stories here. For Coughlin, it will be her first meet since the Austin Grand Prix in January.

This meet will also be a better test for Ryan Lochte’s comeback from a knee injury. Bad weather cost him all but the final day of the Orlando Grand Prix, and even that, he admitted, might have been too soon.

Really some of your comments….. WTG Michael…. would love to see you swim, anywhere! Years and years spent in the pool, you deserve to have some fun. Grand Prix

Who’s glad he planned this trip out to Mesa months ago? This guy!

Hopefully the USA swimming website will not explode on Thursday 24 for the first race of MP.
There’s a big risk if all swimming fans from all over the world connect at the same time to watch the live streaming.

And now Mesa is known everywhere in the world! 😆
Good publicity for this town.

yeah, i hope i could be able to watch all his races via live streaming. so excited!

How fortuitous that Lochte will also be swimming in Mesa. He’ll be able to collect his bet winnings from Michael!

I definitely think that the one year off swimming last year will prove to be a very good thing for Phelps in 2016. The short break while keeping his fitness rejuvenate him and recharge his fire.

I wonder if Phelps and Lochte will both swim the final of the 100 free at Summer Nationals this year in their quest to be on the 4×100 free. If so, that’s going to make it a very crowded field. Those two, plus the other returners from finals last summer (Adrian, Ervin, Feigen, Grevers, Dwyer, Dressel), plus Cullen Jones, and you already have nine even before Jack Conger, who C final time would’ve placed 1st in the B final and and ahead of Dressel in the A final. All that to say, there’s at least ten swimmers with a very legit shot of making finals in the 100 free this summer. That’s going to be a great race to watch.

I think you can add several more to that list.