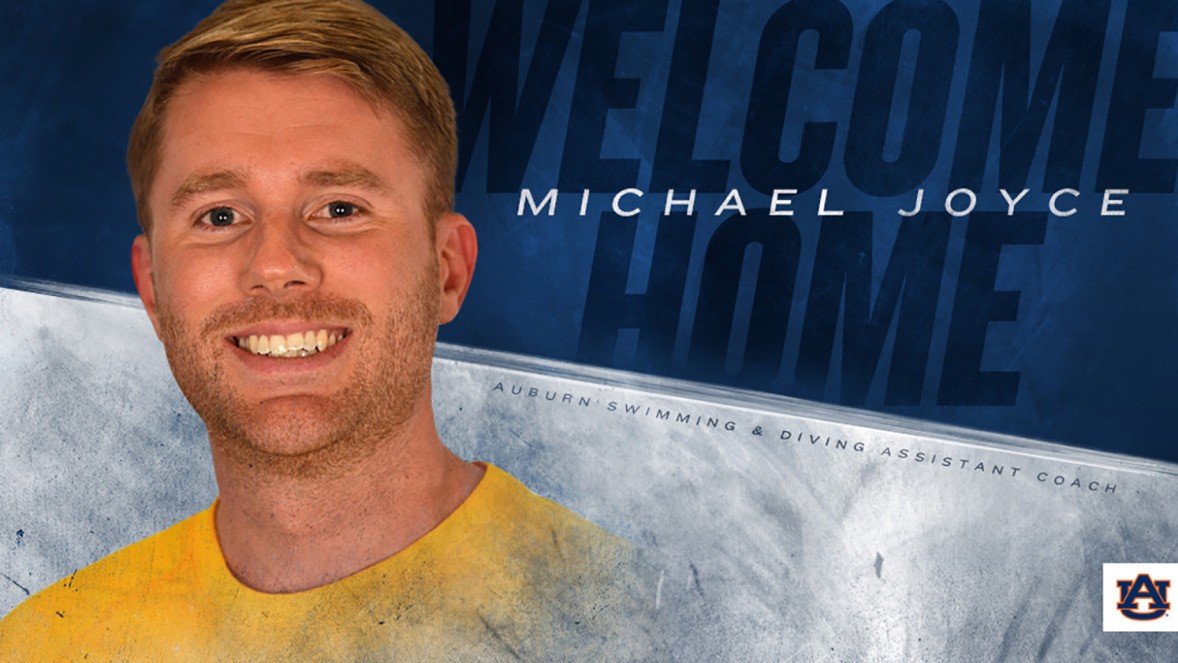 After just adding Duncan Sherrard as an assistant, Auburn has named Michael Joyce as the newest addition to the coaching staff under new head coach Gary Taylor. Archive photo via Auburn Athletics

After just adding Duncan Sherrard as an assistant, Auburn has named Michael Joyce as the newest addition to the coaching staff under new head coach Gary Taylor.

Taylor and Joyce have NC State ties — Joyce was a volunteer assistant for two seasons with NC State before taking an assistant job at Princeton, where he served as the lead Sprint and Middle-Distance coach. Taylor spent the last six seasons with the Wolfpack, serving as associate head coach for the last two.

Most recently, Joyce spent the 2017-18 season coaching the sprint group at Arizona State under head coach Bob Bowman. The Sun Devil men finished 20th and the women 23rd at their respective 2018 NCAA Championships.

Joyce completed his undergrad and graduate degrees at the University of Florida, where he was an All-American swimmer. He also brings club experience to the table, having served as an age group coach for Raleigh Swim Association as well as Gator Swim Club.

“Gary and I worked together once before and I know the type of passion, energy and enthusiasm he brings each day and I look forward to being alongside him again,” Joyce said. “I’m aware of the Auburn swimming tradition. It is one that is second-to-none and I’m looking to help the program get back to the place in the standings it is capable of.”

“I am very thankful for the opportunity Coach (Bob) Bowman gave me at Arizona State. I have learned more in one year under his expertise than I ever thought possible. He’s a great man and a great mentor. I look forward to seeing him on deck in the future. I’m also thankful for the ASU staff and student-athletes for embracing me into their family this past year.”

“We are very appreciative of Mike Joyce for his many contributions to the ASU swimming program this year,” said ASU head coach Bowman. “While we are disappointed to see him move on, we understand that this move is in the best interest of his family and his long-term career plan. We wish him all the best at Auburn!”

Besides Taylor, Sherrard, and Joyce, Tyler McGill remains on the Auburn coaching roster as an assistant along with head diving coach Jeff Shaffer. McGill, an Auburn alum, has been with the team since 2013, while Shaffer has headed the diving program since 1999.

Congratulations Michael. You have been and I am certain will be one of the truly good guys in out sport. Very happy for both you and AU as it is a great fit!

looking forward to seeing Auburn once again the most feared team in the SEC. Could be happening soon on the plains!

“Disappointed” and “best interest of his family”? Bowman can’t be happy or say congratulations to his assistants? A decent head coach would be proud of his assistant coaches making these kind of moves let alone want them too. Shows the type of Head Coach he is.

I’d be disappointed if my previous boss wasn’t disappointed that I left, I find that to be a great compliment.

Here is my big question:

Who is going to replace Gary Taylor in Raleigh?

Wow! Really? The man the myth the legend?? Wow!

Look like the Gators are ahead of the game here, they sent not 1 but 2 spies into the Auburn Tigers team 🙂 🙂

Sorry probably not a funny one…. but Congrats Joyce! I was always impressed with his skills during his days at RSA in Raleigh. Great to see Joyce doing big things!

It seems as though a quick rise to the top is unlikely given that most of the top recruits for fall of 2018, 2019 and potentially 2020 have already make their decisions. It will take some time for this coaching staff to build the kind of program that top recruits want to be a part of.

Ah, see, I understand where you’re coming from, but I don’t think you fully understand all that Mike Joyce brings to the pool deck. His talents as a sprint and mid-distance coach are truly unparalleled, on top of his fiery work ethic and never-ending enthusiasm for the sport. It really doesn’t matter what type of recruits you give Mike Joyce– he’ll transform them into CHAMPIONS!!!

Okay, I was on your side and liked your enthusiasm, until this:

>It really doesn’t matter what type of recruits you give Mike Joyce– he’ll transform them into CHAMPIONS!!!

all the gators are turning in to tigers!

Worked with Mike at Princeton…..this is a great hire! Congrats

And now the coaches are leaving ASU too….