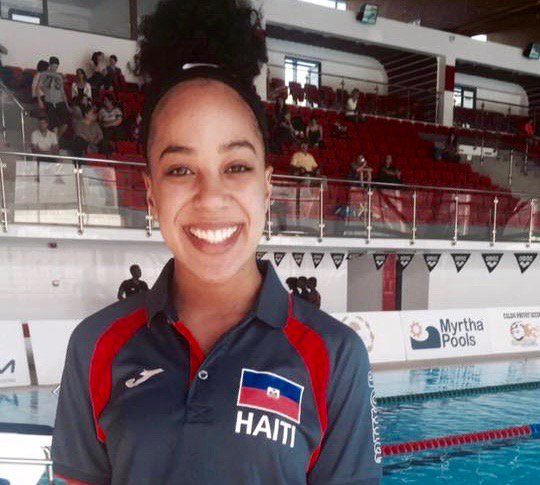 On Tuesday, July 5th, University of Chicago sophomore-to-be Naomy Grand'Pierre got a life-changing call from her mother. She was confirmed to compete in Rio. Current photo via Pierre Cote (Twitter: @pierrecote)

On Tuesday, July 5th, University of Chicago sophomore-to-be Naomy Grand’Pierre got a life-changing call from her mother. She was confirmed to compete in Rio.

Grand’Pierre, who trained club in Atlanta with the City of Atlanta Dolphins for ten years before relocating to the Windy City to attend the University of Chicago, will be the first woman from Haiti to ever compete in swimming at an Olympic Games.

According to a release from the University of Chicago, Grand’Pierre had this to say about her big news:

“To my surprise, my mom called me on Tuesday to let me know that the decision was made and that FINA had accepted me as the female competitor to swim for Haiti. At first, I didn’t believe it. I was overwhelmed and overjoyed and relieved. I had been training since March for something that was so uncertain and it was Tuesday, with 32 days left till Rio, that things finally became official.”

Swimming at the Caribbean Islands Swimming Championships (CISC) in the Bahamas recently, a meet that serves as a last-chance Olympic qualifier for the Caribbean region, Grand’Pierre finished 7th in the 50 free final with a 27.67, a bit off of her 27.35 from prelims. While she was off of the FINA A and B standards in the 50, she was told she could still go according to FINA’s universality rule.

Grand’Pierre proved to be the highest ranking female swimmer in Haiti, and FINA confirmed her trip to Rio earlier this week. A dual-citizen of the U.S. and Haiti, like her parents, she will represent her country in historical fashion this summer.

Joining her on the Haitian Olympic swim team, also thanks to the universality rule, will be Frantz Mike Itelord Dorsainvil.

It must feel awesome to be the first EVER to compete in that sport for your country!! Congratulations!

No ofense for the swimmer, who didnt born in Haiti, probably never been there either, but she cant be accept at Olympics. Rules for Universality states “swimmer MUST swim at 2015 Worlds Championships in Kazan”. She didnt.

Really like who the f are u to even say something. They are trying to be diverse and u don’t even know if she’s been there or not.. Who cares, she gets to represent her country and I’m sure they will be proud!

3. NFs/NOCs without qualified athletes – Universality Places
National Federations/NOCs with no swimmers who have achieved neither Olympic Qualifying Time or FINA/Olympic Selection Time may enter one (1) man and one (1) woman (Universality), provided that those swimmers participated in the 16th FINA World Championships – Kazan 2015 and are approved by FINA to compete.

You are silly as hell!!

Congratulations for being able to represent Haiti and for making history as the first Haitian woman to ever compete in swimming at an Olympic Games. Representing your country is a great honor and also a great privilege. I wish you a great success for setting example for the next generations in our country. Bravo you are a leader.

When some Spaniard, Portuguese,and others do the same thing by being born in Florida and training there and later went to represent their respective countries, I never heard any complain about they weren’t born in Spain or Portugal and so on.

It doesn’t matter where someone has training and which country the person wants to represent Because no country pay for any training. my daughter is a skater, a swimmer she also has a few degree in marial art my husband and I are the one who are paying for those training and coaches. no cities, no states nor countries pay for her training. if she has a chance to go farther I like her to represent Haiti, but it her decision that will be count when the time comes. I don’t think any country will ask her to represent it. It be her choice to decide with she want to represent America, Haiti or any other country she feel like.

She is an American citizen by law. Haiti has no place here. Suppose the US and Haiti are in war. What country she is going to fight for????

Regardless of where she lives, her blood is Haitian; She should represent her country of birth and in the unlikely event of America ever declaring war on Haiti, I would hope she’d fight for Haiti. I would, and I’m British!

She should fight for the country that would save her life and her family’s life. life matter and nothing can compare with that.In the other hand she has Haiti in her birth certificate and I think her parents are Haitianstill also. Being an American citizen doesn’t mean you forget where you from.

Since her parents are Haitian, haitian constitution considers her as haitian.

Its about the follow rules. We cant accept this. Arkady Vyatchanin was barred from Olympics because he didnt live in Serbia as the rules determine. She didnt accomplished the requirements to swim at 2015 Worlds in Kazan to be reward as an Universality spot. Swimming in Olympics has a 900 spots and should be filled with who deserve to be there.

Naomy thank you for resenting our country I and my family wish the best of like. And don’t forget this, when you win, we win.

Thrilled to read Haiti will be represented in the OLYMPICS ~ I wish you much success Naomi Grand’Pierre !!!!

I hope you take this opportunity seriously and be the first grenadier to win this championship for Haiti,,,,,,,,. best of luck.